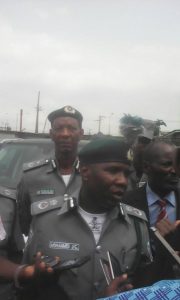 Just within three weeks operations, the  leading Customs anti- Smuggling Unit in Nigeria, the Federal Operations Unit, zone A, Lagos has recorded over N1.6b Worths of various seized goods with 10 suspects in its custody.

Uba also revealed that the Unit through its intervention recovered N166,207,735.25, from duty payments and Demand Notices on general goods from seaports, airport and border stations through wrong classification, transfer of value, and shortchange in duty payment meant for the  of Federal Government of Nigeria.

was  recorded within the period under review.

Conducting journalists round the seizures in Customs warehouse at the Command, Uba disclosed that “The seized items includes,Indian Hemp, 64 Exotic vehicles, 6003 bags of foreign parboiled rice (equivalent to 10 trailers), 963 cartons of frozen poultry products, 431 jerrycans of vegetable oil, 163 bales of used clothing, 569 pieces of used tyres, 69 bags of sugar, four containers, among others”.

“Amazingly, among the seizures was the interception of 570 parcels and 98 sacks of Indian Hemp (Cannabis Sativa)weighing 1,550kg,along Olorunda axis of Ogun state based on intelligence making it the highest seizure of such hard drugs in the history of FOU A.

The Controller said ‘You all know what would have happened if it got to the wrong hands undetected. In the spirit of interagency relationship, the seized Indian hemp will be handed over to NDLEA for further investigation.

“Also worthy of note is the evacuation of 2,671 bags of 50kg rice using 9 hired truck from 9 makeshift storage houses in Ilogbo, Abeokuta based on credible intelligence despite resistance led by the Lagos Roving Team complemented by other teams. There was mob attack against our operatives but that never deterred us from performing our statutory responsibilities. Thank God there was no casualty” UBA said.

He assured that they will continue to enforce the Federal government policies  on banning of importation of rice and other prohibited goods through the land borders regardless of any situation so as to encourage efficiency in local rice production, which will create more employment opportunities for our teaming youths.

The vehicles are still under detention pending the grace period allowed for the owners to bring relevant customs documents. The interception was done while on information patrol at various locations within our areas of jurisdiction so says the Controller

He also noted that “These 13 detained exotic Vehicles alone have a duty paid value of N258,137,766.98 only. It will interest you to know that among the detained vehicles in our previous briefing, 64 of them have been converted to seizure after all necessary legal procedures were followed within the week under review, awaiting Court condemnation”.

“Additionally, four containers 3x40ft and 1x20ft were seized for different Customs breaches in the importation process. The 1x20ft container carried 2,260 cartoons of Gonca Spagetti made in Turkey and 530 package of Rifle Energy drinks made in Europe as against baking powder declared in the SGD. Further investigations revealed that the container was never exited, we are still investigating and all those found culpable will face the full wrath of the law.

Comptroller Uba however warned all smugglers/intending ones and their accomplices to desist from such trade malpractices and invest their money in legitimate business, assuring that “The Unit has devised other operational modalities that will give them a run for their money and count their losses and finally end in jail”.