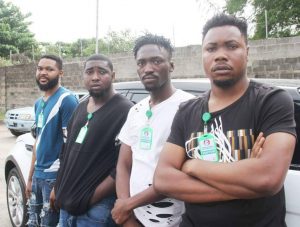 Stats Police Command has warned Lagosians to be careful where they go for medical attention.

The advise came following the arrest of a fake Medical Practitioner, Abdulrahman Mohammed, who has allegedly practiced for over four years at the Mushin area of the state.

Commissioner of Police, Imohimi Edgal who paraded the suspect  said he was arrested by operatives from the Area D Command Mushin.

He said the 39 year old suspect who hails from Ran village in Gambaru Ngala, Local Government Area of Bornu State, was operating as a medical Doctor at number 3, Bemisniele street, Idi-Araba before he was arrested on a tip off.

He said the suspect claimed that he stopped at primary school level, but has no certificate to show that he really attended primary school.

The CP said “Investigation into the activities of Mohammed who had been impersonating as a medical doctor for the past four years, revealed he had been practicing as a doctor since 2014. He had been administering intravenous injections, conducting medical test on his patients and taking urine and blood samples from his patients.

“He has confessed that he buys his drugs from Idumota Market, Lagos Island. We recovered blood pressure reading machine, both manual and electronic types, syringes, drip packs both saline and sugar solution etc. He will soon be charged to court.”

The CP however said he has declared war on illegal hospitals, clinics and patent stores, “I have directed the Area Commanders, Divisional Police Officers (DPO) and detectives to go after them.

“I want to warn all those dealing on fake drugs and illegal medicine practitioners to leave the state or risk the wrath of the police.”