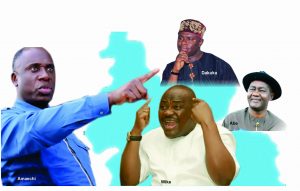 Intrigues to unseat Governor Nyesom Wike of Rivers State   come 2019 is deepening day by day as the 2019 elections draw closer. The battle line seems to be drawn between Nigerian’s Minister of Transportation and Immediate past governor of Rivers State, Mr. Rotimi Amaechi and the incumbent Governor, Barrister Nyesom Wike on who govern the oil rich State in 2019.

While Wike is fighting hard to get his second term as governor from the People’s Democratic Party (PDP) ticket, Amaechi is using the federal might from the All Progressive Congress (APC) led government to install   his political Son, Dr Dakuku Peterside who is presently the Director General of the Nigerian Maritime Administration and Safety Agency (NIMASA). Dakuku, a former Commissioner of works in Rivers State during Amaechi’s tenure as governor was also a gubernatorial candidate under the APC in 2015 election,but he lost woefully to Wike.

Since his defeat in 2015, Amaechi and Dakuku have been applying all political manipulations to unseat Wike as Governor. It could be recalled that in the bid to take over Rivers State by the APC, all the three Senatorial  Districts and 10 House of Representatives  seats in  the 2015  elections in the state were annulled.

It took over a year before the election was re-conducted after several postponements.

The political warfare between the Amaechi and Wike camp  is   not  new to followers of Rivers state politics since inception of the APC government in 2015.

As both APC and PDP wanted to control the huge resources in Rivers State being the economic nerve centre of the South South.

The 2019 plot by both contenders is expectedly going to be fierce and may even be bloody. At present, and as usual, both parties are trading banters and accusations, threatening fire and brimstone to control the state come 2019.

The Amaechi/Dakuku camp of the APC seems battle ready to dismantle every obstacle be it living or dead to installed Dakuku as the next governor of the state. Amaechi domineering stance has also splits the APC in the state into two factions. Namely, Amaechi/Dakuku faction and the Senator Magnus Abe faction. Senator Abe was said to have left the Amechi camp when he was denied the governorship ticket of the APC for 2019 in the State.

Senator Abe was in Amaechi’s camp when he won, the Senatorial seat during the National Assembly re-run elections in Rivers State in 2016. Abe’s ambition was seen by Amaechi as a betrayal and to frustrate Dakuku Peterside from becoming the next governor, so Amaechi and  Abe part ways.

Amaechi and Dakuku though political appointees of the federal government have been holding both open and secret political meetings and rallies to plot a star political war against Wike.

Neither Amaechi nor Dakuku have  resigned their appointments, they both abandoned their  duty posts on working days to carry out campaign rallies and secret political meetings mostly against Wike. While, the APC government led by President Muhammedu Buhari watch helplessly as both Carry out their campaigns leaving their jobs to suffer.

Why can’t both Amaechi and Dakuku take a cue from Mr Segun Oni who resigned his appointment recently as Deputy Chairman of the APC having decided to contest for the Ekiti state governorship election. The political arena in Rivers State is more tense now as the Amaechi/Dakuku faction, Wike faction and the Senator Abe faction are scheming for the soul of the State Come 2019.

While, the Abe faction is likely to join the Wike faction to battle the Amaechi/Dakuku grandstanding on pocketing Rivers State in 2019, the Amaechi political mechinary is instigating a political revolution against both Wike and Abe factions.

Aside from his open confrontation and condemnation of the Nyesom Wike administration, Amaechi and his political foot soldiers in Rivers State are holding meetings in Villages and Wards of the State to garner supports for Dakuku governorship ambition in 2019. It was gathered that on February 10, 2018, Amaechi Visited Ogoniland Senator Abe’s hometown to lobby the people and to also discredit Abe as claiming to be APC leader in the state. Amaechi was said to not only rubbish Abe, but also raised a candidate to contest his seat in the Senate come 2019. While Abe was in Port Harcourt with some of his colleagues Senators including the Senate President, Dr Bukola Saraki in a thanksgiving Service of his election victory.

Another secret rally by Amaechi was on Friday 6th April 2018, again Amaechi and Dakuku held a mega rally in Opobo which is Dakuku’s home town and this was what he said. Amaechi to opobo people: “if you don’t get Governorship in 2019, blame your chiefs”. “I hear Opobo people have no Chiefs. Do you have Chiefs? (crowd nooo). I hear you have no Chiefs so I came with Ikwerre Chiefs. Where is Chief Chidi Lloyd?( Chidi Lloyd comes forward and Dakuku puts Opobo Chieftaincy cap on his head as the new King of Opobo). We have brought Chief Chidi Lloyd to represent Opobo people. All your chiefs have ran away. In Ikwerre, our chiefs don’t run away. (crowd shame on them! Shame on them). The leader of our own Chiefs that came is Chief Chidi Lloyd. So we brought chief Chidi Lloyd to represent Opobo people”. (crowd cheers) “Now, let me tell you this. When Ikwerre people wanted to be Governor, Ikwerre people came together and said they wanted governorship of Rivers State.

Not one of our Chiefs escaped. Not one of our leaders ran away. Opobo people, if you don’t get the governorship of Rivers State in 2019, blame your Chiefs. They have ran away. Ikwerre people were united. Whether you are from Emohua or Obio/Akpor or Port Harcourt City or Ikwerre LGA, we believed that our course was to get the governorship. Today, today, today, all your own Chiefs have ran away”. Amaechi was addressing Free Rivers Development Initiative rally in Opobo/Nkoro LGA.

Then came a master stroke against Amaechi on April 11, 2018 a group Called M30 issued a Press Release calling on APC to call the Minister of Transportation to order.

In the release signed by Hon. Sir,Anosike Joseph Orduwa, President General of M30 Worldwide alleges that  Dakuku Peterside  has released N5million to destabilized the APC in the state, Especially those who have refused to join the Free Rivers Development Initiatives. The Press Release reads, “The attention of M30, a grassroots mobilization organization of the All Progressives Congress (APC) has been drawn to a meeting held at the Abuja residence of Hon. Minister of Transportation, Rt. Hon. Chibuike Rotimi Amaechi on Monday 9th of April, 2018.

The meeting so resolved with the Minister instructing and directing that:

“Thereafter, the DG of NIMASA, Dr. Dakuku Adol Peterside took fifteen Chairmen of the party to an undisclosed location where he informed them that the he had released the sum of N5 million to each of them through Hon. Emma Chinda, Former Commissioner of Agriculture for the implementation of the instruction of Rt. Hon. Chibuike Rotimi Amaechi, Minister of Transportation. ‘We are aware that Hon. Chinda only released the sum of N250, 000 to each of the fifteen party chairmen, promising to release the balance of N4.750 million in Port Harcourt.

“We are therefore calling on the national leadership of the All Progressives Congress (APC) to call the Hon. Minister of Transportation. Rt. Hon. Chibuike Amaechi to order to stop exerting corrupting influences on party executives at all levels of the party in Rivers State. The Minister should also be called to order not to act as a clog in the wheel of internal democracy which is cherished and respected in the All Progressives Congress.

“In the same vein, we call on party officers at the state, LGA and ward levels not to entertain any fear but to be steadfast in the ideals of the party as we are determined to canvass for internal democracy in the party”  the release concluded.

But Governor Wike is not also relenting in galvanizing support for his second term bid.

Wike on Saturday April 14 ,2018 also visited the South Senatorial District likely to be a retaliation rally, the people of the south senatorial District comprising of seven LGAs including Opobo held a rally endorsing Wike for 2019.

Among the prominent people that spoke and endorsed Wike for second term was former Senator Lee Meaba. Who said Governor Wike has liberated Rivers State by providing Infrastructure and deserved second term. Responding, Wike said ‘The APC led government is playing politics with the Ogoni clean -Up. APC has nothing to offer Nigerians, they have failed and we are going to choke them”.

Wike has also been in the warfront of matching both the APC led federal government and the Amaechi foot soldiers in Rivers state.

Recently, the governor cried out threat to his life and how he has uncovered a plot by the federal government to implicate him by planting incriminating materials to embarrassed him when he travelled out of the country.

Fireworks and more Fireworks awaits the political gladiators in Rivers in the next few months the elections.

Will Amaechi/Dakuku use the federal might and money to unseat Wike in 2019 or Will Wike use its incumbent power to choke the Amaechi and APC again to retained his seat come 2019?  The ground is set for the battle.