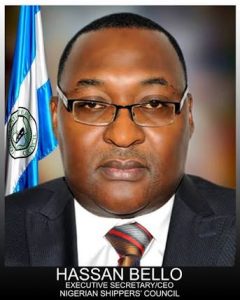 The Nigerian Shippers’ Council has promised to continue to play its role as the ports Economic Regulator to sanitise Nigerian ports from unapproved charges and fraudulent acts by port operators, especially Terminal Operators and Shipping Companies.

The agency said  it has recovered monies amounting to over N80 million from  shipping companies between January and June 2018 that were fraudulently charged to importers.

The Deputy Director Compliance Monitoring of the NSC, Chief Cajethan Agu  disclosed this while delivering a lecture titled, “Nigerian Shippers’ Council as an Interventionist Agency’, at a one day training seminar for Maritime Journalists held  in Lagos on Friday.

He said that $23, 000 was recovered from COSCO Shipping alone,stating

that the said money which was recovered from demurrages, storage charges, excessive charges and other illegal collections had since been returned to their owners.

According to Agu,” Between January and now, we’ve gotten up to N80 million. If you translate the $23,000  that COSCO paid, it’s up to N10 million and don’t forget, we carried enforcement at GAC, there was a refund because almost 30 containers which were held captive were released. Then there is even another one again with same COSCO, the demurrage waivers and other interventions. It’s only the Company CEO that will give you the breakdown but I know that between January and June, we got a refund amounting to more than N80 million.

“It is not only from demurrages, even storage charges and some were recovered from excessive charges that were imposed on the consignees.

“They were given back to the owners, although in the case of COSCO, they sent the Cheque to us and we handed over the Cheques to them. How can somebody make a complaint and you can’t trace him? The meeting we did is normally tripartite meeting, when you complain, we look at your case, if it is genuine, then we invite you and we invite the person that you made the complaint against”.

Agu  advised all  operators to always play by the rules,adding that there are  guidelines and regulations which he said were meant to be obeyed and that any operator who is not ready to operate by the rules and obey the laws of the land should pack and go.

He warned that no shipping company nor terminal operator will be allowed to impose unapproved and fraudulent Charges on importers which is making Nigerian ports most costly ports of doing business.

Earlier in  his opening address, the Executive Secretary of the Nigerian Shippers’ Council (NSC)  Barr. Hassan Bello who was represented by the Director Special Duties, Mr Ignatius Nweke  noted that the one day training seminar for Maritime Journalists  by the NSC was put together in order to bring the journalists together so as to offer them a platform to interact with the Council which would in turn enable them to understand where they are.

Nweke appreciated the journalists for keeping  the Council and indeed the Nigerian maritime industry on their toes even as he described the media as critical stakeholder in the industry adding that the industry cannot do without the media.

He called on the journalists not to fail in their duty to criticize the Council constructively and to advise it on ways to get the industry on the right footing urging  that the maritime industry should be put on the front burner as it is a major revenue earner for the economy.