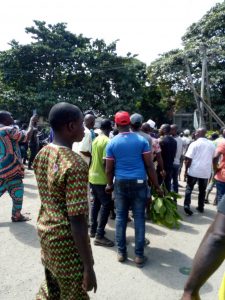 Aggrieved truck drivers and their motor boys yesterday descended on a Policeman at the Coconut area of Apapa- Oshodi expressway during a protest by truck drivers over extortion by Police, Navy and the officials of the Nigerian Ports Authority (NPA).

According to an eye witness  the protesters who shut major roads in Apapa, however encountered the police at coconut bus stop where both parties clash and it was feared that a policeman was seriously attacked.

The protesters numbering over two thousand marched through Creek Road to Liverpool before diverting to Point Road Junction where they prevented other cargo laden trucks from exiting Apapa.

Except for  few trucks belonging to Dangote, trucks were not seen coming into the  Apapa Ports Complex and Tin Can Island Ports ,which happens to be the two largest ports in the Country

Most of the protesters bearing placards and green leaves, chanted songs accusing the Naval Officers and other security agents of taking as much as N40,000 from them for each truck before such truck are allowed access into the ports.

Speaking to journalists on the protest, Inuwa Abdullahi, Vice Chairman  Dry Cargo Section of the National Association of Road Transport Owners (NARTO) described the extortion as real as it happens in broad daylight.

He said aside from the Navy , all other uniform security agencies at the ports including those not on duty come around at nights to demand for money from the truck drivers .

Chief Information Officer of Western Naval Command, Commander Chinwe Umar describes the allegation as false. She said it is not new for truck and tanker drivers to make baseless allegations against the Navy without evidence. She challenged the leadership of haulage operators to come forward with evidence of extortion against any naval personnel.

Chike Oti, Police Public Relations Officer for Lagos State Police Command could not be reached as at the time of this report as calls to his mobile line did not go through.