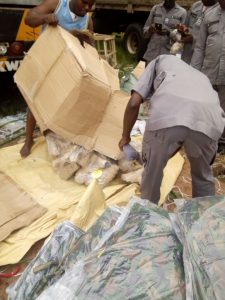 According to a statement by the National Public Relations  Officer of the NCS, Deputy Comptroller Joseph Attah

the container was taken to Owerri were proper  examination in the presence of the representative of the Owner revealed the followings:

Some sacks of made up garment,

Comptroller in charge of Federal Operations Unit, Zone C, Ahmed Azarema said  the owner’s  representative has been detained,while investigation to arrest and prosecute  all those connected to this criminality has already commenced.