…Says he will pursue the Case up to Supreme Court 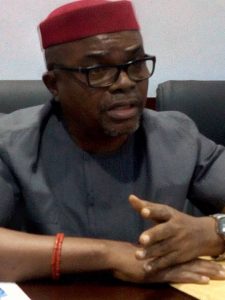 The lingering crisis rocking the Board of Trustees (BOT) of the Association of Nigerian Licensed Customs Agents (ANLCA) is far from being over as  tempers and ego continues to rise with the latest actor, Chief Peter Obih who is also the Secretary of the current Board instituting a legal action challenging the  legality of the Alhaji Taiwo Mustapha assume   Board chairmanship.

Obih  who spoke with some selected journalists to state his own side of the story   also said he will never withdraw the case even if appealed upon to do so, saying that he  will fight the matter up to the supreme court to see it logical conclusion .

According to him the immediate past National President of the Association, Prince Olayiwola Shittu is suspected to be  responsible for tthe crisis rocking the board.

Obih maintained that Henry Njoku is the one recognised by the Corporate Affairs Commission (CAC) as the legal Chairman of the board of the oldest Customs Brokers Association.

He also alleges  that Prince Shittu was engineering the crisis because his effort to impose his anointed candidate to succeed him failed at the last presidential election held in Enugu in March, 2018 which Mr Tony Uju NWABUNIKE emerges as the ANLCA National President.

When asked why he took part in the election and now complaining, Obih said , the introduction of money bags  was the major blunder by the last administration which  sells forms to  BOT candidates at the cost of  N500,000. With this Obih said unqualified and unfit  candidates bought their way and contest election into ANLCA BOT.

He said “The problem we have in the board is between truth and falsehood and not between Henry Njoku and Taiwo Mustapha.

“I trace the issue back to the past administration, a house built on a weak foundation will definitely collapse. There are things that the outgone president did that shouldn’t have been done , the consequences of what he  did back then is what we are suffering now”

“Since 1954 when ANLCA was registered, there has never been a time we had the membership of the board through election and buying of forms, we usually nominate people merritoriously, and at the NEC meeting, we would cast votes for them. But this time around, the last administration threw it open and ask people to pay N500,000 , this is how the money bags came into the board,  it’s not that they deserve to be on the board.

“Somebody who have never served in any capacity in ANLCA suddenly found himself in the board and he wants to be Chairman, can you enter the Senate today and want to be the President?”

after the board elections in 2013,  Prince Shittu who was president at that time, ought to have approached the Corporate Affairs Commission (CAC) to register the names of the new board,  but it has not been done up till now, there supposed to have been a new certificate showing the new members.

He accused Mustapha and his group of not allowing the ANLCA President’s earlier appeal for 90 days grace period  to to look into the matter to  elapse before announcing Mustapha as authentic Chairman of the board .

“There was an intervention from the National President Mr Tony Uju NWABUNIKE at a meeting that  was held at the Santiago Hotel in Festac Town on 10th of May. The president pleaded for three months grace but to my surprise, on 13th of July, some people came up and said they have taking the mantle of leadership in the board. It is not yet 90 days,  but 60 days”

Peter Obi said he has instituted a court case on the matter seeking court declaration and clarification.

He said that Mustapha bought his way into ANLCA and that prior to the election, he was not known in ANLCA.

“I am suspecting that the past president of this association knows what is happening, rumor has it that he is the one engineering the crisis because the person he was fronting did not win”

“The way things are going now, the president intervened, but they don’t want to give him the 90 days he requested for,  and the outgone president is not saying anything, so I am beginning to suspect him”

“Shittu tried in office,  but this idea of perpetrating yourself in office by putting your own person there is not right.

During Shittu’s administration, one tribe took over the whole chapter in the western zone , leaving only one,  that is Mutalar Mohammed International Airport  chapter, how can you be cheating somebody and you expect him to keep quiet”. Obih said.