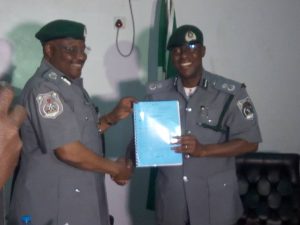 The flagship Command, Apapa Customs is recording its first unprecedented revenue feat in its history with a whopping N61.1b  collected as at close of work on Tuesday 28th August 2018.

Expectations are high that, the Command will net over  N65b  to government coffers before the end  of the month.

The Apapa Command which witnessed a change of leadership last week with Comptroller Abubakar Bashir taking over from Comptroller Musa Jubrin as the new Area Controller held its first parade and meeting with Officers and Men of the Command yesterday.

Bashir, a grounded officer and  meticulous goal getter  is stepping into  the Apapa Command with victory song of revenue boom, a trend he will surely sustained.

It is on records that, the highest revenue the Apapa Command has ever collected is in the region of N37b.

In the month of July this year, its collected N33b, signifying that August revenue in the Command will double the July collection.