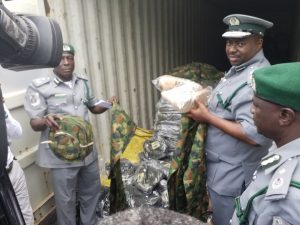 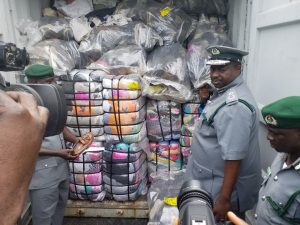 Comptroller Saidu acknowledge the support and cooperation you have rendered to the Command over the years as we look forward to your continuous partnering with us to educate the general public on our core mandate of Revenue Collection, Facilitation of Legitimate Trade, and Enforcement of the Fiscal Policies of the Federal Government in terms of Trade. 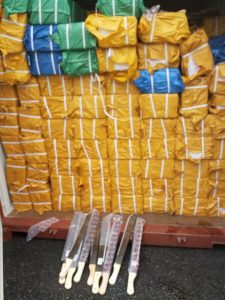 It could be recalled that the Command generated a total N94,044,676,428.01) in 2018 which is about 80% of allotted annual target of ₦117.8 Billion. A comparative review of the preceding year shows that the Command realized ₦373,226,990.74 more than it did in 2017 bringing it to about 0.35% increase in the revenue collection.
In his words, Saidu said
“Specifically, when relating the revenue collected and seizures to the operational strategies used, I am happy to inform you that the Command focused mainly on intelligence base risk profiling of our system with 100% physical examination of cargo at the various Terminals and Sheds; meetings and sensitizing the stakeholders on the need and benefits of compliance; application of due diligence and professionalism in documentation and examination of cargoes; and importantly, building synergy with other relevant government agencies such as NAFDAC, SON, Port Health, NDLEA and other sister security agencies especially Navy, Police and Immigration for information which has proven to be useful at crucial moments”.

The Command also recorded 61 remarkable seizures of various items such as 9 x 40 ft containers of Tramadol, Hyergra, Diclofenac and Analgesic Tablets of different types; 64 by 20 containers of foreign parboiled rice and other items such as military uniforms, boots and caps with a total Duty Paid Value (DPV) of ₦1,617,153,753.00).

According to the Onne Command Customs boss all these seizures were found to have committed various infractions such as false declaration, concealment, wrong classification, import without end user certificate and complete disregards of import and export guidelines with intent to smuggle in illicit goods.

Comptroller Saidu described as
worrisome and very unfortunate that despite the wide awareness on the dire consequences of smuggling activities on economic growth and development, some citizens still find joy in perpetuating this evil act only for their personal gains.

Comptroller Saidu sum up the Command achievements thus
“The overall achievement is sequel to the support of the Comptroller-General of Customs and his Management Team with the full deployment of NICIS II application in the Command which necessitated training of five hundred and twenty (520) Officers/Men, and the resultant effect has yielded an intrinsic advantage in terms of revenue, control of infractions in the system and increased compliance level as a result of the additional functionalities. Furthermore, the Command has started in-house training of its Officers and Men on trade facilitation and with emphasis on oil and gas equipment.
The Command will not rest on its oars and will strive to justify the confidence reposed in us by the nation to make sure that this year achievement surpasses the former.

Gentlemen of the Press, we use this forum to reassure you of the Command resolution to achieve speedy clearance of cargo from the ports, and also reduce the cost of doing business in the Maritime Industry owing to the Presidential directives on Ease of Doing Business. And we also affirm on the zero tolerance of the Comptroller-General of Customs, Col. Hameed Ibrahim Ali (Rtd.) for smuggling which remains unalterable as the Service will do everything within its capacity to fight it to standstill.
In this respect, we beseech the stakeholders to continue to live upright in their declarations with due diligence and professionalism in proper documentation to avoid the negative consequences of contravening the law.”