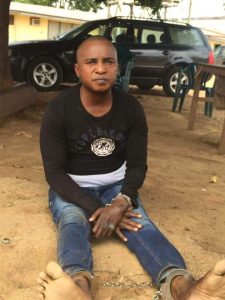 The Katsina State Police Command has arrested 13 kidnappers and armed bandits terrorising the states of Katsina, Kano and Zamfara in recent times.

Among the deadly kidnappers arrested are those terrorizing Katsina State and responsible for the recent Kidnapping of the Katsina State Governor’s Mother Inlaw, 65years old Hajiya Hauwa Yusuf and Several armed robberies and kidnappings within Katsina, Kano and Zamfara States.

The suspects confessed to the kidnapping of the 65years old woman and narrated how they negotiated, collected ransom and shared it. Also one of the kidnappers led the IRT team to a new provision shop he opened with the ransom money in Katsina town, landed properties and houses they bought with the ransoms collected from their naferious activities.
The IRT team have so far identified the various properties and Seized them.

Some of the items recovered from them are one AK47 rifle, 22 Magazines, 1,000 Ak47 live ammunitions, 200 Cartridges, Some phones belonging to the victims, including the Phone used for ransom negotiations and two motorcycles which they used for their operations were equally recovered by IRT Operatives from the Kidnappers.

It could be recalled that the recent Kidnapping of the Mother-in-law to Governor Aminu Bello Masari of Katsina State on 8/2/19 at her residence in Katsina, on the instruction of the IGP Adamu Mohammed, operatives of the IGP-IRT attached to Operation Puff Adder launched a massive manhunt on the kidnappers and after serious and unrelenting follow up, the notorious syndicate of the kidnappers including their arms and ammunition suppliers who confessed to the kidnapping and other armed robberies and in Katsina State were arrested by IRT, including the gang leader and the masterminder behind the kidnappings.