Customs Hands Over N32.750million Worths of Cannabis to NDLEA 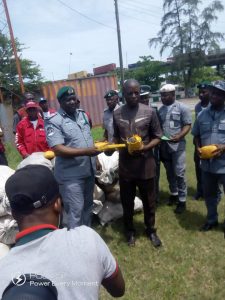 Compt Binga handing over the seized cannabis to NDLEA official

The Western Marine Command, an arm of the NCS policing the western waterways has intercepted cannabis sativa (Indian Hemp) valued at N32,750,000. 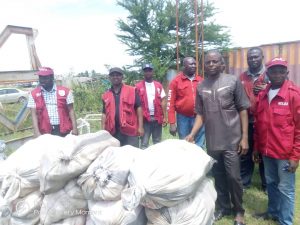 This was contained in the command’s first quarter report so far.

In a brief ceremony yesterday at the WMC at Ibafon, Apapa, Lagos State, the Customs Area Controller, of the command, Comptroller BN Binga handed over the 1,286 wraps of Indian Hemp which were smuggled in over 20 sack bags to the Seme border Commander of the National Drugs Law Enforcement Agency (NDLEA), Mr Udotong Essien. 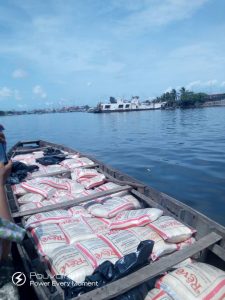 “The seizures made so far, no arrest of suspects have been recorded because each time officers come in contact with these smugglers, they abandoned their items and jump into the waters, the terrain they are so used to”

Binga said the command will continue to battle smugglers on the waterways, while saying that the Customs Management is working hard to see the sea going vessels are launched as soon as possible , as some officers have already been trained to man the vessels when operational.

On his part the NDLEA Commander, Mr Udotong Essien while receiving the drugs thanked the Customs Service for always partnering with them and for always handing over such drugs to the agency.

Essien also called on other government agencies to see the NDLEA as the statutory agency mandated to checkmate illegal and illicit drugs abuse and called on them to always handover drugs seized by them to the agency.