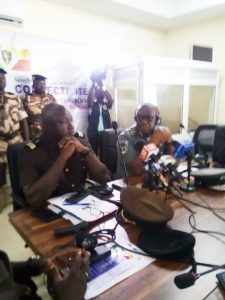 To further enhanced their bilateral trade transactions and reduce fraudulent and unholsome practices within its trading corridor, Nigeria and Benin Republic yesterday embarked on interconnectivity sensitisation of stakeholders and the general public on the new seamless interconnectivity trade portal to be used in imports and exports trade between the two Countries.

The new trade portal which is developed by Webb Fontaine will be official launched on the 20th of this month at the Nigerian / Benin Republic border.

Both Countries have earlier finalised technical aspects of the interconnectivity expected to achieve ease of doing business, promote trade, prevent revenue losses and curb smuggling across their common borders, enhanced national security curb transborder crimes for both Countries and increase revenue generation of both Countries among others.

Speaking at the event, the Comptroller General of the Nigeria Customs Service, Col Hameed Ali ( rtd) represented by Assistant Comptroller General in charge of ICT and Modernisation , Benjamin Aber and the Director of Customs Administration of Benin Republic ,Sacca Boco Charles called on all stakeholders to adjust to the new seamless trading practice at the border which will enhanced import and export trades between the two Countries.

Explaining further, ACG Aber said the the system will only accommodate one declearation for both Countries.

What that means is that what ever an importer decleares at Benin Republic will be seamlessly transmited to the the Nigerian Customs. As such an importer or exporter does not need to make such declearations in Nigeria again and vise versa .

“What we mean is that, whatever declaration you make in either country will be known by customs administration of the other Country. It will be impossible to now make a declaration at one end and later change or adjust earlier made declaration in the other country to avoid arrest or payment of appropriate taxes.

“This addresses the possible incidents of duty evasion through insincere declarations or attempt to hide and smuggle a prohibited item into the Country. Whatever you are declaring on the other side is electronically transmitted to this side and vise versa and will form the basses for you assessment.

It becomes impossible to change declaration concerning the consignment. By this, we shall be preventing smuggling electronically.
“This does not affect the extant procedures peculiar to both countries on prohibition list, contraband and country by country rules on processing of certain items for importation. Laws of both countries applies to items so declared ” Attah said.

He added that in addition to single declarations being used by customs administration of broth counties in a transparent platform, the new system will be time saving and no doubt facilitate trade and reduce cost of doing business while curbing possible corrupt tendencies.

Revenue collection, would be more accurate while security will be enhanced with the deployment of non intrusive equipment such as scanners and others that will detect items that could compromise security, fuel insurgency or other criminal acts in both Countries.

He also said the existing trade relationship between both countries would be strengthened by the new initiative as it will forge a more enduring partnership aimed at promoting legitimate trade and discouraging trans border ilgalities.
Governments of both countries, according to Attah, would be able to access more accurate and reliable trade data or statistics for national planning and other economic resource materials.

Levels of compliance to trade and fiscal policies by members of the trading community is expected to increase with the new system whose backbone is sustained by an internationally recognised ICT for trade solution provider,Webb Fontaine.