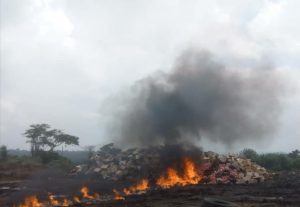 It was another scene of massive destruction of huge wealth, but preservation of lives and property at the Shagamu, Ogun State dump site, where the Nigeria Customs Service and National Agency for Food, Drugs Administration and Control (NAFDAC) in a joint operation destroyed 58 containers of Tramadol drugs worth N14,706,032,871.00. 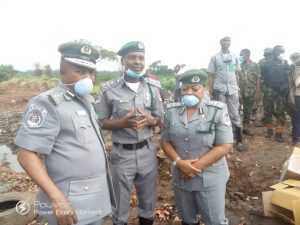 Tramadol is a controlled drug that can only be imported through permission by medical regulatory agencies in Nigeria.

The 58 containers which were intercepted in the western ports of Apapa and Tin Can Island
has four different products varied milligrams ranging from 200mg, 225mg and 250mg of the hard drug. 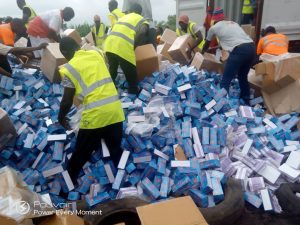 According to Assistant Comptroller General of Customs, Aminu Dahiru, ACG Enforcement and Drugs and Chairman, Joint Committee on Destruction of Seized Drug (Tramadol ) Consignments, while Speaking to participants and media men at the destruction site, warned offenders to desist from such acts. 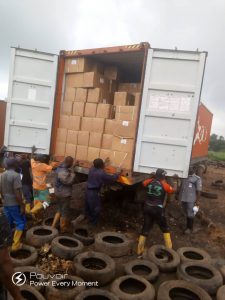 “Today’s event symbolizes yet another milestone in the history of NCS in its effort to deliver on its mandate of reducing smuggling to the bearest minimum as well as contribution to free country from fake, substandard, unregistered and abuse of controlled drug.

“The seizures of these drugs have in no small way prevented the occasion of many kind of social vices such as kidnapping, armed robbery, banditry and other associated crimes we are facing today.

“These drugs to be destroyed here today constitute just a meagre number among the numerous seizures already handed over to NAFDAC and NDLEA for destruction in the past,” Dahiru said.

In her remarks, Mrs Monica Eimunjeze, Director, Registration & Regulatory Affairs of NAFDAC, who represented the Director General of the Agency commended the NCS for the feat and advocated for more collaborations between security agencies and the public to eradicate this menace of drug abuse and illegal importation of such hard drugs into Nigeria.

In her words “We have something to do in controlling the use of this Tramadol in our society. See billions of Naira going down the drain, money that would been used to build our Country. This event today speaks our minds that, we say no to bringing in of hard drugs, we say no to importation of substandard drugs and we say no to destroyed society,”

Also present at the event was the Comptroller General of Customs, Col Hameed Ali (rtd), represented by Assistant Comptroller General, KC Ekekezie the Zonal Coordinator NCS, Zone A. She congratulated members of the committee for their diligence in conducting the assignment.

She said “The seized items to be destroyed were intercepted at various customs formations across the Country. The menace of such drugs in our society cannot be underestimated,”
She continued, “Having caused huge negative impact both on our economy as a whole and the depreciation and danger to human life.

“I call on all and sundry to assist Officers of the Nigeria Customs Service and other relevant security and regulatory agencies by providing real time information at all times to help fish out the perpetrators of this negative act smuggling dangerous drugs and bring them to justice,” Ekekezie said.

The Ogun State government and other security Agencies were ably represented at the event.
ACG Dahiru also added that similar exercise will be carried out in all the Zonal Commands of the Customs across the Country , Zone C, Port Harcourt, Zone, B , Kaduna and Zone D, Bauchi.

It could be recalled that a massive seizure of 40 by 40ft Containers were sized by the Apapa Customs, while 9 others were also seized within the same period at the Tin Can Island Command last year. Three suspects and N150million bribed money in United States of American Dollars was also seized as exhibit.