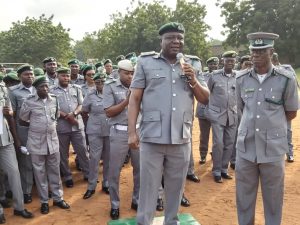 According to the Command the seizure of over 7, 848 bags of rice (50kg each) in the month of July, 2019 is indeed a landmark among numerous successes recorded by the Command. “This is evidently a patriotic duty by the Service to fully align with one of the cardinal Federal Government policies targeted at boosting agricultural development with a view to attaining national food self-sufficiency.”

“While the Command is unrelenting in pursuing other cases including the murder of one of its personnel (CA I Hamisu Sani) on the 6th of January, 2019 with the major suspect involved in the case now in custody, this will serve as a deterrent to other unscrupulous members of the society who might harbor the intention of harassing security agents while discharging their lawful duties. Moreover, a notorious smuggler based in Owode have been arrested and charged to a Federal High Court for smuggling of rice and presently on remand cooling his feet in Ikoyi prison pending the fulfillment of his bail conditions”.

UNBUNDLING OF OGUN COMMAND:
With the latest restructuring of some Units and Commands of the Service the Ogun State Customs Command was split into two, now Ogun 1and II.
“It will interest you to know that the Management of Nigeria Customs Service has formally communicated a development directing the unbundling and creation of eight (8) new Area Commands within the Service. Ogun Command is privileged to be among the beneficiaries with a view of enhancing administrative efficiency and boosting revenue generation for the Service. The two brand new Area Commands in Ogun state are Ogun I and Ogun II Area Commands. Ogun I will have an area of coverage relating to regulation and enforcement of all import, export and anti-smuggling related activities in Ogun state with Headquarters at Idiroko. While Ogun II Area Command will be saddled with the responsibilities of enforcing and regulating all Excise (industries under Excise control), Free Trade Zone and Parcel Post related activities in Ogun state with Headquarters at Abeokuta.
This visionary development is based on the outcome of the Nigeria Customs Service Board at its 50th Regular meeting held on 21st May 2019″.

Comptroller Agbara however
commend sister agencies, opinion leaders, heads of traditional institutions, eminent personalities, the Media and other law abiding members of the public for their unflinching support to NCS in Ogun state.
He said ” It is our believe that the new structure of Nigeria Customs Service in Ogun state will indeed be recipe for further cementing the existing relationship towards the overall growth, development and stability of our dear Country Nigeria” .