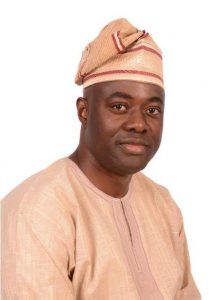 The Oyo State Governor, Engineer Seyi Makinwa has hit the ground running in a bid to use agriculture to create jobs and produce enough food for his people and beyond. 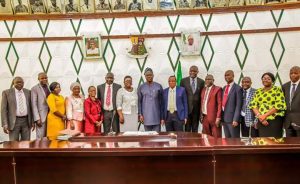 According to his statement from his Facebook page, Makinde said his vision for agriculture in Oyo State is summed up with two words “Comparative Advantage ” 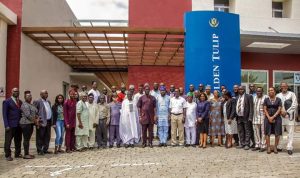 Gov Makinde with stakeholders during the Agricultural Retreat and third pic, Gov. Makinde with his newly sworn in Commissioners

Saying that agriculture is Oyo State’s key for unlocking the economic prosperity in the state is not mere rhetoric. But, despite being one hundred per cent (100%) non-oil based economy, agriculture contributes a mere 24% to our nominal GDP.

“My vision is to help farmers see they are part of a larger chain and that their approach to farming can either help the system grow or keep it moribund. For the agric sector’s contribution to GDP to increase, our administration must see agriculture as a business.

” I must note at this point that in my assessment of agriculture in Oyo State, I have been able to identify a key area of comparative advantage: aquaculture. Oyo State has some of the best conditions for raising market ready catfish and tilapia in Nigeria.

“As promised during my campaigns, before the completion of my first year in office, we will have a functioning central fish market in Oyo State.
One of the core issues that farmers in Nigeria face is access to storage facilities. In Oyo State, we have a facility that can store up to 10,000 metric tonnes of grain. Plans are in top gear to ensure that the automated silos are completed and put into use. It will be operated on a Public-Private Partnership basis.
The governor promised.

…[A]side from the areas where Oyo State already has competitive advantage, we are looking to invest in research and development to come up with more efficient ways of running agriculture as a business.

Establishment of cottage industries in commodities clustered areas (P.P.P.). For example, we have nine farm settlements… These provide investment opportunity for input suppliers, logistics companies and developers interested in building markets and stalls.

There are also opportunities in fruit processing. Oyo State has an existing horticulture industry. We have the popular Ogbomosho Mango. Meat Processing and Cassava processing are also areas we are considering for focus in investment in the long term.

The policy thrust of my government remains to improve the productivity of farmers in Oyo State by strengthening existing areas of comparative advantage for commercial agriculture and developing and championing new areas of competitive advantage.