…I WILL NOT RESIGN, NWABUNIKE FIRES BACK 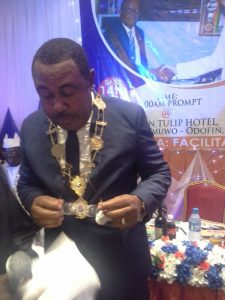 The embattled National President of Association of Nigerian Licensed Customs Agents (ANLCA), Hon. Tony Iju Nwabunike has vowed never to resign as the president of the Association despite such calls from some individuals.

Nwabunike was responding to a statement issued by the suspended National Publicity Secretary of ANLCA, Joe Sanni calling on him to quit for lack of capacity to resolve the crisis rocking the association since the inception of his regime over a year ago.

It will be recalled the Joe Sanni in a recent statement issued last week, among other things insisted that the only way forward to resolving ANLCA crisis was for Tony Iju Nwabunike to “immediately call a mini National Executive Council meeting with the sole agenda to reverse those very injurious injustices with unreserved apologies, recognize the BOT led by Alhaji Taiwo Mustapha, adopt all actions taken by that Board, plead for the withdrawal of all cases instituted by aggrieved members and then call a general reconciliatory meeting for a cessation-of-hostilities, pronouncements to the general public and to be widely publicized.”

“Alternatively and most honourably, Tony Iju Nwabunike should resign for lack of capacity to tackle the ANLCA crisis, loss of legitimacy and moral high ground to superintend over ANLCA affairs any longer”, he added.

However, the Senior Special Assistant (Media) to the ANLCA President, Barr. Val Iwuchukwu in a chat with newsmen in Lagos yesterday on behalf of the National President said that those calling for Nwabunike’s resignation did not mean well for the association and were part of those who tried to resist the wave of change sweeping through the association currently.

He however assured that the President had taken some bold steps towards reconciling different factions of the association as he believed that the crisis should be solved amicably.

On the allegation that the crisis in the association were being engineered by the National President and the embattled Chairman of the association’s Board of Trustees (BOT), Chief Henry Njoku, Iwuchukwu said,” Let me tell you this, the writer must be very bias or probably, he is writing out of frustration otherwise I expected him to be more knowledgeable than that. If for example there is a problem in the Board which I will not deny, the President is working hard to resolve it because it is actually affecting our movement and it is affecting our day to day businesses. You cannot tell me it is not a problem, it is a problem of leadership in the Board and very soon we shall solve it and we will solve it.

Speaking on the alleged ineligibility of Nwabunike to contest the election that produced him as he had no valid customs licensed as at that time, Iwuchukwu observed that customs was very open and transparent saying that anyone can walk in to customs tariffs and trade, excise or licensing department to ask them if Mactonnel Nigeria Limited had ever been queried since 1999 till date.

“I will give you the license of Mactonnel from 1999 till date and it has never been queried. I have heard so many times that his license was one of the licenses that were hacked, there was nothing like that. In fact, the man (Sanni) was saying that Mactonnel has not been having licenses, his license is up to date since 1989 and nothing has happened to it. The records are there”, he assured.

“Except if they are trying to build a new one because if you are talking about feasibility study, that means it is about to start but Tony Iju’s own has been an existing project since 2017 that is almost completed. Are they attributing it to him because he was the pioneer chairman of CRFFN? Anyway, he had written a letter to the Federal Ministry of Transport through Permanent Secretary and copied the CRFFN and the National Assembly on that issue for clarification and I think that will solve the problem.”

On “abandoning his mandate, gallivanting round the world and partying locally to the detriment of his constituents and major constituencies”, Barr. Iwuchukwu disclosed that ANLCA president is not being paid by the association adding that the fact that Tony Iju is the National President of ANLCA did not mean that he won’t seek for his livelihood.

“So, if he goes to his office in Port-Harcourt and this man said he is junketing, I don’t know what he wants him to do. If he goes to his office in Dubai for example or go to his Office in Houston, I don’t know what the man should say that he should be doing in the secretariat. And again, Tony Iju puts in every week, three days here and use the other two days to go around his personal business. So, he is not the type of person that uses his position as a president of ANLCA or a senior officer of ANLCA to begin to look at it as a retirement base business.”

On allegation that the President was known for abandoning any office he was elected in the past beginning with Apapa Chairman, National Secretary and as pioneer Chairman of CRFFN, the SSA who went down memory lane to show how the President creditably discharged his duties in the past said that Tony Iju was interim Chairman of Apapa chapter of ANLCA for three years and handed over to elected Chairman in the person of Chief Peter Obi, completed his four year tenure as the National Secretary even when the then president and first Vice president abandoned their positions to join politics and was given another two years on interim ground which he equally completed bringing the number of years he served as National Secretary to six adding that as the pioneer Chairman of CRFFN, he equally completed his two year tenure and handed over to his Vice, Olanrewaju who took over as Chairman while he remained a member of the CRFFN Governing Council for another two years bringing his stay in the Council to four years.