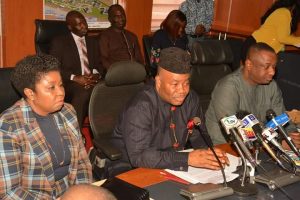 The Minister of Niger Delta Affairs, Senator Godswill Akpabio has said that the Niger Delta Development Commission (NDDC) has not performed well since it was established. 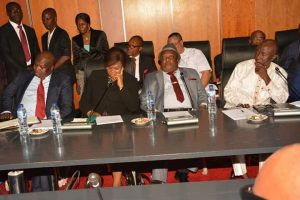 This is just as the Minister decried the huge indebtedness of the Commission to the tune of over N2 trillion to some real and imagined contractors .

Senator Akpabio who disclosed this while meeting with the Management team of the NDDC said there would be a forensic audit of the funds received and spent by the Commission since 2000.

The Minister said “The impact of NDDC on the entire Niger Delta region would have been more if not for those thing militating against development, personal interest, political interest, interferences here and there.

“The real youths of the Niger Delta who undertook clearance of water hyacinths have not been paid, those that were paid are political youths, people that you owe just N500,000 to N1 million are over 400 and they have been going to NDDC for over 10 years, and the money has not been given to them.

“I know as for now in terms of debt, NDDC is owing over N2 trillion, some of them are real, some are imagined, but the problem we are having is that you won’t know the ones that are real when they are mixed with the ones that are political, and the result is that someone who took a loan to do a real job for NDDC probably may have died, leaving the family in penury.

“We will do forensic analysis and audit, we will try to go backwards even from the year 2000 up till now to know what came in and what went out and why we have not seen much on ground,” Senator Akpabio said.

Stating the need to refocus the Commission, the Minister noted the Commission would cease from paying over N200 million as rent for their headquarters.

Earlier in his address, the Minister of State for Niger Delta Affairs, Mr Festus Keyamo said the NDDC has failed the Niger Deltans.

He said the funds spent by the Commission was not commensurate with the infrastructure on ground.

“The purpose of this meeting is to meet with you for the first time as the supervisory Ministry, get to know you and discuss some issues that are at the front burner, redefine the vision of the Commission that has since been lost over time.

“I recall that a few weeks ago, the Vice President of this country did say publicly that this commission has failed, that is the truth.

“In terms of commensurability of the project viz-a-viz the income that is accruable to the commission, we have failed.

“Let us be clear that it will not business as usual, it will be business unusual from now on,” Keyamo noted.

The NDDC Management team was led by the Director Overseeing the Commission, Dr Akwagaga Enyia.