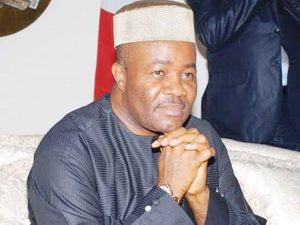 The Minister of Niger Delta Affairs , Senator Godswill Akpabio has lamented the huge expenses incurred by the management of the Niger Delta Development Commission (NDDC) while abandoning the agency’s headquarters’ project in preference for paying N300m as yearly rent.

Akpabio who was accompanied by his Minister of State, Festus Kayamo said this during his first meeting with the management team of the NDDC led by its Overseeing Director, Dr Akwagaga Enyia, added that it was a shame that the agency did not have any legacy project to show for its N2 Trillion indebtedness.

He said the Federal Government would conduct a forensic audit and analysis of the money that came into the NDDC and how it was spent since 2000.

The minister added that the Federal Government had received many petitions regarding the political appointments made in the NDDC, saying government was looking at them.

He said, “Since the time of OMPADEC, you started a building; unfortunately, 20 years after, you have not been able to complete it. You should also have a little bit of sober reflection. It is a meeting to appraise where we are today, where we ought to be and where we are going.

“I don’t want you to look at me as a politician because politicians speak with both sides of the mouth. You have before you a representative of Mr President who is very poised and determined to work with you to redirect the NDDC.

“We talk about the NDDC as if it is a cash cow. But I think that in terms of debt and what you pile up, you owe over N2 Trillion. The problem we are having is that you won’t even know the ones that are real and the ones that are political.

“We will do forensic analysis and audits; we will try to go backwards, even from year 2000 until now to know what came in, what went out and why we have not seen much on the ground. We will stop you from doing politically-motivated roads, where you go to black soils, pour asphalt and then commission it. When the first rain comes, it washes away.

“We will stop you from paying N200m to N300m a year as rent on the headquarters you are staying. You should be ashamed of paying the state government over N200m to N300m a year when you could have completed where you are and move in. How come we don’t have legacy projects to show in the Niger Delta? But with a strong collaboration between the Ministry and Niger Delta, I see a brighter future. Akpabio concluded.