CUSTOMS TO BATTLE SMUGGLERS AT SEA, AS NSA COMMISSIONS VESSELS 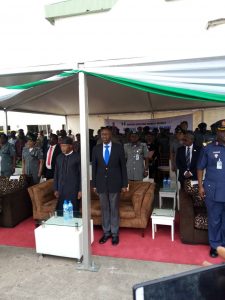 The Nigeria Customs Service (NCS) has finally commissioned its two sea going vessels to battle smugglers and other crimes in the Nigerian territorial waters. 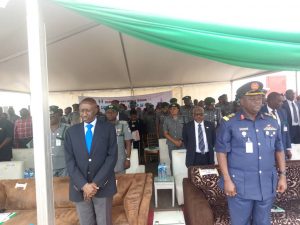 The vessels which were procured over six years ago by the immediate past Customs administration were anchored at the Nigerian Naval Dockyard in Lagos for further military preparation and mounting of gun boats before it was finally launched yesterday. 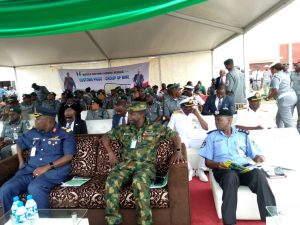 The two gunboats named “Customs Pride” and “Group of Nine” is now battled ready to launch its activities into the high seas to strengthen its anti smuggling war on the nation’s waters. 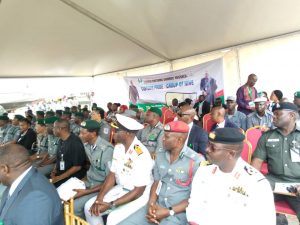 The elated Comptroller General of the Nigeria Customs Service (NCS) Col. Hameed Ali (rtd) disclosed at the commissioning ceremony in Lagos that Nigeria’s quest for non-oil revenue is largely dependent on the Customs Service to fight smuggling and bring it to the barest minimum. 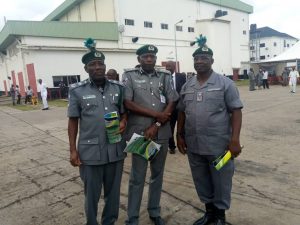 According to him, experience has shown that whenever smugglers face stiff enforcement by Customs anti-smuggling operatives on the land, they turn to the waterways to carry out their illegal trade. 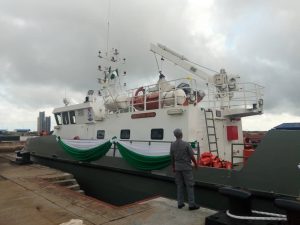 He added: “Unfortunately, before now the Service has been weak on the water arising from the lack of sea going vessels to effectively checkmate smugglers on the high sea. This situation led to the death of nine Customs Marine officers while confronting deadly petrol smugglers on the sea in 2014. 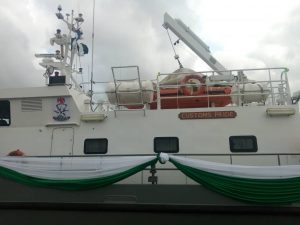 “It is in honour of this group of nine gallant officers who died in the Service of their fatherland that one of the sea going vessels was named ‘Group of Nine’ while the other represents the ‘Customs Pride’ on the sea.”

The Customs boss further explained that the commissioning of the two sea going vessels, well equipped with necessary firepower and other requirements for long time water patrol is in line with the ongoing repositioning of the Service to effectively deliver its mandate to the nation.

He said “With these vessels, I hope smugglers will no longer take advantage of NCS vulnerability on water to smuggle in contraband. NCS Marine operatives can now sail to intercept them right on the high sea.
“The timing of this commissioning is strategic as it will on the immediate boost the ongoing joint security operation Ex-Swift Response on the water and henceforth remain symbol of NCS strength on the sea.”

Also speaking at the event the National Security Adviser (NSA), Major General Mohammed Monguno (rtd) who was the special guest to commission the vessels said that the Federal Government would not bow to any form of blackmail as a result of the closure of its land borders.

The nation’s borders in four region were partially shut down three weeks ago at the commencement of a joint security operations code name “Exercise Swift Response”. The operation which has the Nigeria Customs Service as lead agency also include the Armed Forces, Immigration and Para-Military Service.

Monguno said that some neighbouring countries are already talking to the Federal Government on the issue.
The NSA who scored the taskforce high, stated that the Federal Government was determine to give support to all security agencies that would enable them deal ruthlessly with all those involved in smuggling .
He explained that government was determined to deal with all problems associated to the State of insecurity, adding that no amount of money nor blackmail can force government to revert its decision.

“One of the key issues government is concerned with is the security of the country, this is aside economic issues. From where I operate, I see a lot of things concerning insecurity. However, many tend to see the physical aspects which include insurgents, kidnapping, armed robbery and a whole lot of others. But there are some that are invisible to the eyes. Smuggling is one major source of insecurity.

” We are determine to deal with the problem, no matter the amount of money being moved around by those involved or blackmail” he added.
The NSA also pointed out that so many Nigerians have died as a result of the dangerous drugs and arms being smuggled, adding that the dangerous Items were brought into the country through the land borders.

“If its in the interest of neighbouring countries to allow all these dangerous Items to transit their territories into Nigeria, then it is in our national interest to shut our borders. The ongoing operation swift has been very successful” he added.

The commissioning attracted all the Service chiefs, IGP, senior Customs officials and other stakeholders