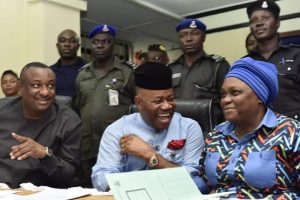 The Minister of Niger Delta Affairs, Senator Godswll Akpabio has directed the Niger Delta Development Commission (NDDC) to complete on-going projects including its headquarters building project before awarding contracts for new ones. 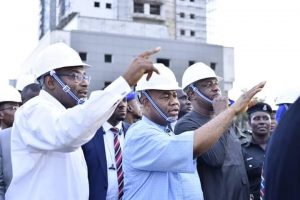 Senator Akpabio gave the charge when in the company of the Minister of State for Niger Delta Affairs, Mr Festus Keyamo paid a working visit to the headquarters of the Commission in Port Harcourt, the Rivers State capital on Friday. 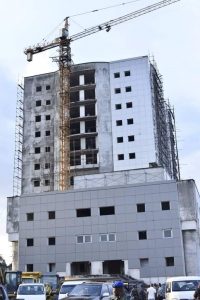 During a meeting with the management and staff of the Commission, the minister disclosed that the NDDC had more than 12,000 on-going projects across the nine states of the Niger Delta region which is experiencing funding challenges.

He said it was not a coincidence that two Niger Delta sons were selected by President Muhammadu Buhari to superintend over the affairs of the Niger Delta region, but a conscious effort at ensuring effective development of the region especially in the areas of infrastructural and human capital development.

According to Senator Akpabio, “The creation of the Ministry of Niger Delta Affairs was a direct response to the series of agitations by people of the region flowing from the deep sense of exclusion, environmental degradation, lack of development, poverty and unemployment facing the region,” he said.

He reiterated that NDDC was a child of necessity which was established “with a mission of facilitating the rapid, even and sustainable development of the Niger Delta into a region that is economically prosperous, socially stable, ecologically regenerative and politically peaceful” and that the Commission has to adopt a new template to achieve this mission.

According to Senator Akpabio, “The Niger Delta Development Commission must adopt a well structured funds development regime whereby all funds that accrue to the Commission must be properly utilized in this new era of probity which President Muhammadu Buhari demands,” he said.

In her welcome address, the acting Managing Director, Dr Akwagaga Enyia said the Commission under her watch had embarked upon fiscal responsibility as required by the anti-corruption drive of the Buhari administration. She promised to expeditiously complete the on-going headquarters building project.

The minister Senator Godwill Akpabio and the minister of state, Mr Festus Keyamo who later inspected the on-going construction of the headquarters building of the Commission, charged the NDDC management to channel more funds into completing the building.

They also visited a failed portion of the East-West road and promised an intervention to alleviate the suffering of commuters.