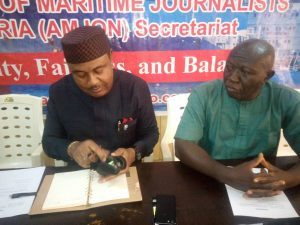 The National President of the Association of Nigerian Licensed Customs Agents (ANLCA), Hon Tony Iju Nwanbunike has said that Nigeria is not ready for the much talk about African Continental Free Trade Area (AfCFTA) agreement due to kick off in March 2020. 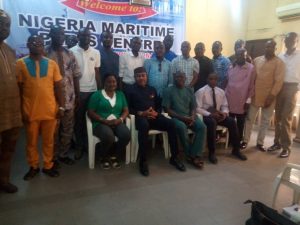 AMJON members in a group photograph with Hon. Tony Iju

The number one Customs broker in Nigeria stated this during a round table discussion with Members of the Association of Maritime Journalists of Nigeria (AMJON) the Nigerian Maritime Press Centre in Apapa, Lagos State on Monday as a guest.

He lamented that, today Nigeria can only boost of petroleum as the only export item.
“If we are to compete with South Africa, Morocco, Algeria, Egypt etc which produces so many products in a market that is borderless, that is the area I want the Federal Government of Nigeria to look at instead of total closure of the land borders ”

Tony Iju also said that if Nigeria has to benefit from the AfCFTA the federal government should look at agriculture and see how we can maximize our agricultural products for exports.

“Let me tell you Nigeria is not ready for the AfCFTA agreement and it is going to be very difficult for us.
We are going to face a lot of challenges. You see it more dangerous for people to see you as the giant of Africa, but when it comes to trading you cannot fix into it.

” I want the federal government, through the Minister of Agriculture to look at agriculture .I went on a sensitisation tour of Kaduna/ Kano last week, in Kaduna I was shocked to see a lot of crops we will be exporting from that axis, but the farmers needs government incentives, encouragement and supports.

“In the AfCFTA agreement we need a balanced of trade, but if you are not exporting any thing apart from petroleum, then your country will become a dumping ground.
The other African Countries knows we have the market and the population so we need to brace up for the challenges.
I want the Manufacturers Association of Nigeria(MAN) and other agricultural bodies to see this agreement as an opportunity to export Nigerian made products”.

Narrating the crisis that is rocking the Association, the ANLCA president said he istill holding meetings and hoped a reconciliation will come very soon.

Despite the crises, the ANLCA National President also inform the Maritime journalists that in his over a year as president he has used his connection and goodwill to unblock over 300 licenses of his members which was blocked by the Nigeria Customs Service (NCS) before hetook over.
Nwabunnike said the licences were blocked before his assumption of office as President of ANLCA.
According to him, he used persuasion and his long standing closeness to the Customs Service for it to review its decision on the blocked licenses.

He added that the hitherto blocked licenses prevented its owners from doing their freight forwarding businesses , a situation that caused hardship and was capable of promoting unemployment in the sector.

He also told reporters that his association recently sponsored ten persons abroad on some “Train the Trainer” courses .

He said some of his members have also gone on training abroad . According to him, ” Six of them just returned from Brussels while another four of his members just completed their training in the United States and are back to take on train -the- trainer with other members in the Country.

He also said ANLCA Secretariat under his watch has become more functional with increased documentation coupled with higher degree of discipline and that full internet services are restored for members to do their businesses through the Secretariat.