The Akwa Ibom State Commissioner of Police, CP ZAKI AHMED has asked the mother of a missing, but found four years old Master Victor Samuel Asuquo to enrol him in school after the child was found and brought to him. 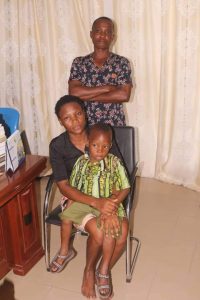 The CP who discovered that Master Victor Samuel was very brilliant, but was not yet admitted in any school due to lack of funds, however offer him a scholarship to resume school.

“After Service, the whereabouts of young Master Godwin could not be determined. A Good Samaritan, one Ekemini Stanley, residing at No. 4 Ukpong Ebe Street, Uyo, found the child along his street, and took him to ‘C’ Division Police Station, Aka/Etinan.

“The same day, at about 9pm when the Police Public Relations Officer of the Command, SP Odiko Macdon visited the Division, he saw the said boy and quarried what a child of that age was doing at the Police station at such a time, but was informed that he was a found child.

“He asked the officers concerned to bring him to the Public Relations Department at the State Headquarters the following day, while concerted efforts were being made by the DPO and the Juvenile welfare centre (JWC) of the Division to locate the parents.

” It is heartwarming to state that on Tuesday, at about 3pm, the Police located the mother of the missing, but found child, one Miss Comfort Elijah of Nung Ette, Ibesikpo Asutan Local Government Area.”

The statement further said that the Commissioner of Police, CP Zaki Ahmed while handing over the child to the mother caution parents to always be security conscious and see the the safety of their children as paramount.

“The Commissioner of Police, while handing the child over to the mother, called on parents to always be security conscious and see the security of their children as paramount, the children he observed will become future leaders.

On his part, Mr Ekemini who found the child said he was tempted to keep the boy, but opted to do the right thing before the law.
The CP lauded his good gesture and urged other citizens of the State to emulate him. He warned perpetrators of child stealing and traffickers to stay away from Akwa Ibom State or face the wrath of the law.

CP Zaki Ahmed, impressed by the brilliance of young master Godwin whose mother said was not going to school because of lack of funds, awarded scholarship to him to commence school on Thursday, October 17th, 2019.