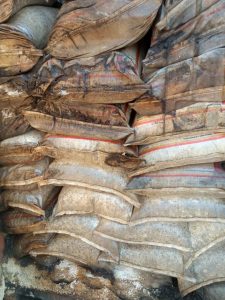 The banter of words are still brewing between the Nigeria Customs Service (NCS) and Masters Energy Commodities Limited, a subsidiary of the Masters Energy Group over the importation of expired rice into the country recently. 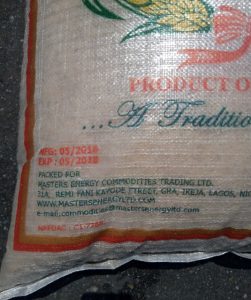 The Comptroller General of Customs, Col Hameed Ali (rtd) had on Tuesday 29th October 2019 at the Tin Can Island Port showcase to journalists 54 x 40ft containers seized by the command. 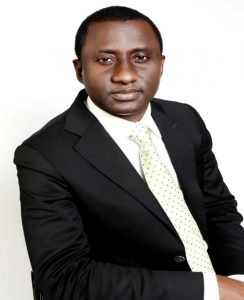 Uchechukwu Ogah, President of Master Energy Group and Minister of State for Mines and Steel Development

Among the containers were 34 x 40ft which contained 50kg and 25kg bagged foreign parboiled rice.

Most of the containers of 50kg bagged rice were with the inscription “Packed for Masters Energy Commodities Trading Limited” with the address 31A, Remi Fani Kayode Street, Ikeja GRA, Lagos.On the rice bags were also stated MFG (manufacturing date)05/2016 and EXP (Expiring date) 05/2018.

Master Energy Group is owned by Uche Ogah, a chieftain of the All Progressive Congress (APC) from Abia State, he is currently the Nigeria’s Minister of State for Mines and Steel Development

At the briefing by the Customs boss, he attributed the seizures of the expired rice through the seaport to the desperation by importers who now use the seaport to bring in expired items since the land borders are closed.

Though the Customs statement at the briefing did not specify the actual date of seizure, as such was reported as current seizure. This information gap had sparked- up an immediate response by Masters Energy, through their lawyer, Barr Monday Ubani, claiming that the Customs boss lied to the Nigeria public that his company imported expired rice into the country.

Ubani in his statement obtained by our Correspondent said the rice was seized in August 2016 and not 2019 as showcase by the Customs boss.

HERE WE PRESENT UNEDITED STATEMENT FROM MASTERS ENERGY IN RESPONSE TO THE CUSTOMS CG PRESS BRIEFING AT TIN CAN ISLAND PORT ON TUESDAY 29th OCTOBER 2019.

ALLEGED SEIZURE OF 30 CONTAINERS OF RICE BY NIGERIA CUSTOM SERVICE OF AHMED ALI.

I do not know how many of you listened to this piece of news yesterday in various television channels and radio stations where the Comptroller General, Retired Col Ahmed Ali showed 54 containers of spoilt rice and other commodities including fake pharmaceutical products and vegetable oil allegedly worth 2.7 billion Naira in Lagos. According to him “One significant finding about this seizure is that all the rice have expired or about to expire”. The retired army colonel said that the rice was re-bagged as local ones even they were coming all the way from China and Thailand.

THERE IS NO SINGLE TRUTH IN WHAT COL AHMED ALI WAS TRYING TO MAKE THE WHOLE WORLD TO BELIEVE IN THE SAID PRESS CONFERENCE.

If you goggle, you will find out that sometime in 2016 it was widely reported in the news that about 30 containers of rice belonging and imported by Masters Energy Commodity Trading Limited through NIGERIAN PORT, TINCAN ISLAND, APAPA was impounded for failure to pay the correct tariff when clearing them by the Customs Licensed Agent. It was even reported that Masters Energy then petitioned The House Committee on Customs, Excise and Tariff that its agent Messrs Destiny Impex Limited, a clearing company registered and licensed by the Customs made a false declaration in order to cut tariffs for the 30 containers of rice. The Company indicated willingness to pay the correct tariff as the agent was paid full money but decided to cut down the tarriffs in order to avoid paying full value of the tarriffs. This request was turned down and the company was later INFORMED through anonymous source that the same rice has been shared to the INTERNALLY DISPLACED PEOPLES’ HOMES IN THE NORTHERN NIGERIA.

Itis important we point out here that this parboiled rice was purchased from Thailand from a company known as Asia Inter Trade Rice Export Co, Limited with a disclosed address and there is bill of lading to that effect. The quantity imported were 60 containers in all. 30 containers were seized due to the under declaration by the Agent while the remaining 30 containers arrived later at the Port by which time the Federal Government has put Rice as one of the famous 41 Items that will not enjoy Forex of the Central Bank of Nigeria. Due to this policy as aforementioned, the remaining 30 containers remained uncleared and abandoned. We have letter from Customs Authority asking Masters Energy to seek the approval of Central Bank of Nigeria before they can clear the remaining rice.

The issues begging for questions really with this emergency press briefing by the Retired Colonel are as follows:

1. Why was it convenient for the Comproller General to withhold the date of the said interception. These container belonging to Masters Energy was impounded since 2016!

2. What point was the Comproller General of Customs wants to achieve by this emergency press briefing in 2019 over a seizure that was done since 2016 and already in the news? Is it to prove to the gullible Nigerians that Nigerian Customs Service that is under “heavy fire” for its excesses is really working and saving Nigerian’s economy?

3. What was also intended to be achieved by saying that the rice has expired or about to expire when it failed to disclose when the seizure was done and whether the life span of rice was supposed to be for ever?

4. That Nigeria should clap for the Comptroller General who has wasted such quantity of rice that should have been donated to the Internally Displaced People in Nigeria who are dying of hunger everyday?

5. Why do we choose to run government by sheer propaganda in this internet age where lies and falsehood can easily be detected by discernible minds?

I AM MORE THAN PERPLEXED! MOU.

But in swift reaction to the Masters Energy response, the Nigeria Customs Service accuses the company of false narrative aimed at the Customs CG’s person and position.

In a press statement sent to our Correspondent yesterday, signed by the Customs National Public Relations Officer, Deputy Comptroller Joseph Attah, on behalf of the Comptroller General described Masters Energy response as desperation to save face.

The attention of the Comptroller-General of Customs, Col. Hameed Ibrahim Ali (Rtd) has been drawn to a false narrative aimed at his person and position of the Nigeria Customs Service by officials of Messrs, Masters Energy Limited.

In their desperation to save face, their lawyer had gone to town discrediting the media briefing about the seizure of 33 containers of rice that were mostly expired and few about to expire.
For clarity, NCS wishes to state as follows:

 Yes indeed 30 containers imported by Masters Energy and falsely declared as Yeast were seized in 2016/2017.

 That after judicial process, the rice was forfeited to the Federal Government. The 30 containers of rice was given to the victims of the insurgency in the north-east in line with Presidential directive.

 On Tuesday 29th October 2019, the CGC addressed the Press about the interception of 54 containers, out of which 33 containers contain rice.
 It should be noted that in these 33, only 25 belong to Masters Energy Limited.

 The discovering of these containers stacked in the terminal came as a result of painstaking profiling of un-utilized Bill of Lading and unclosed manifests which led to the physical discovering of these containers with expired rice. Some of the bags carry Nigeria Addresses coming from outside the country. (No. 31A Remi Fani Kayode Street, GRA, Ikeja, Lagos and Yunee International Trading Co. Ltd, 103 Ebittu Ukiwe Street, Jabi, Abuja)

It should be noted that when goods are imported but not declared, they are not yet brought to Customs attention hence cannot exit the port unless the owners succeed in compromising Port officials and operatives to smuggle them out. This was not (or could not) be the case here.

It was therefore the recent steeped up surveillance at all entry and exit points that led to the holistic audit of all manifests and profiling of all un-utilized Bill of Lading that led to this interception.

It is obvious that their desperation to save face is hindering understanding of the fact that until anundeclared container is identified, it cannot be intercepted therefore cannot be talked about. Why should it bother the company that NCS is informing the public about the interception of containers they did not declare? Could it be for the fear of the legal action that will follow the press briefing?

Containers have distinct identities (Numbers) so cannot be mixed to confuse the public. We have the numbers of those falsely declared as yeast and seized then and these (25 in reference) are containers that were not declared and have been fished-out through profiling. They are distinct and clear for any well meaning individual to understand. (See attached lists for 2016 and 2019 seizures). The dates of seizures can be seen in column 9 of the attached lists.

NCS is already known for its high profile interceptions, like the 2,671 Pump Action rifles in 2017, over N14 billion worth of dreaded Tramadol, increased revenue generation among many others. We therefore have no need to use Masters Energy’s expired 25 containers of rice to “Shine”.

It is imperative to state that, the following day Wednesday 30th October 2019, the CGC again addressed the media at Port-Harcourt Area II Command, Onne, about another 11 Containers of expired rice worth N102,352,800.00 and many other prohibited items worth billions of naira. All these are the Service resolve to rid the country of prohibited, unwholesome and harmful items.

As a responsible agency of Government, NCS will not disappoint on its mandate of enforcing compliance by maintaining zero tolerance to smuggling activities, irrespective of whoever is involved and under whatever circumstances

Let it be clear that NCS stands by every word spoken during the Press briefing and has already commenced action towards bringing the culprits to justice.