Home » News » ANLCA IS ONE, NOBODY WILL TAKE ADVANTAGE OF US -SHITTU

ANLCA IS ONE, NOBODY WILL TAKE ADVANTAGE OF US -SHITTU 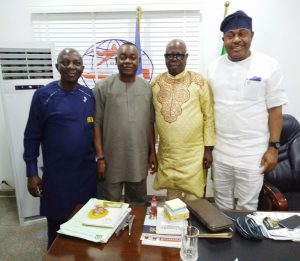 The Association of Nigerian Licensed
Customs Agents (ANLCA) has assured stakeholders to tackle the various challenges militating against operational activities at the nation’s seaports saying that the association would map out strategies to engage both government and private operators in the maritime industry.

This assurance was given yesterday by the immediate past National President of ANLCA, Prince Olayiwola Shittu during a courtesy visit to the “Dikko Inde House” the association headquarters.

Shittu alongside Dayo Azeez , one of the Board of Trustees (BOT) member and other dignitaries accompanied Shittu to see Tony Nwabunike, the national President.

Shittu’s visit had come barely a week after leaders and Chairmen of Chapters of the ANLCA western zone had paid same visit to the national headquarters of the foremost Customs Brokers house.

We also gathered that this is the first time Prince Shittu will visit the ANLCA house since after leaving office over a year ago.

Shittu’s visit also witnessed a brief ceremony where he was presented his certificate as it is the practice of the association to issue certificates to its members on a yearly basis.

In his brief remarks, Shittu said is time for all ANLCA members to come together to work better and stronger as a team in resolving myriad of issues confronting members in port operations.

He noted that gone are the days of infighting among members of the association and with this reunion those who were fueling the crisis in ANLCA will be put to shame even as he affirmed to continuously play an advisory role to the current national executives in their quest to better the lots of ANLCA members.

He further pointed out that the Tony Iju Nwabunike led executives of the association has exhibited tremendous leadership qualities since taking over as president .

On the numerous challenges facing customs brokers and other stakeholders in the port, Shittu said “Let me assure you that jointly; both the former and present leaders of ANLCA will resolve the current crisis at the port because we are all victims and we are all operators at the ports.

“So leaving it to Tony Iju alone will not solve the problems, but what he has done is that he took the courage to open the door for every members to come in.

” Let me say that the crisis does not even allow members at chapter level who are front runners to do their job.
In fact this December will be the last time people will take advantage of us, but by January you will see what will happen. Shittu assured .

He also promised to support and work closely with the executives to ensure that ANLCA takes it rightful position in the industry.

“We have operational problems at the port and every licensed customs agent is not happy about what is going at the port.” Shittu stressed.

Former Vice President and a board of trustee members of ANLCA, Dayo Azeez also noted that the practitioners are faced with numerous challenges bedevilling port operations stressing the need for collective efforts by members to tackle the issue.

On his part the National President of ANLCA ,Tony Iju Nwabunike said the association would work collectively to tackle the numerous challenges confronting freight forwarders in the port.

” Let’s forget the issues of ANLCA for now. We have so many issues that must be resolved and it is going to be a collective efforts by us all to get it right.

Nwabunike assured that ANLCA is coming up with a game changing plan by January to boost port efficiency and the ease of doing business at the ports.

Some of the challenges highlighted in port operations include: the deplorable state of the roads,delay in cargo clearance and arbitrary charges by the service providers.

It could be recalled that during the NECOM meeting of the association two weeks ago, the executives took a bold decision by recalling all suspended members of the body in the western zone. This followed immediately, the visit of the western chapter chairmen to the National president and yesterday another team led by Shittu also visited the ANLCA president.