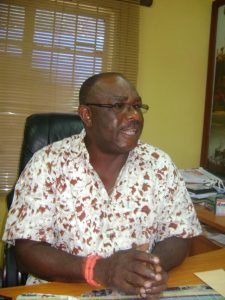 The founder of National Association of Government Approved Freight Forwarders ( NAGAFF), Dr. Boniface Aniebonam has called on the Council for Regulation of Freight Forwarding in Nigeria (CRFFN) and the Nigeria Customs Service (NCS) to synergized in ensuring seamless trade facilitation in Nigeria ports.

Aniebonam who spoke on sundry issues affecting the maritime sector in Lagos on Wednesday during his interaction with the maritime media called on all stakeholders, especially the government agencies to carryout their functions with the powers confers on them by law.

He stressed that CRFFN operations has made the job easy for customs. And there is need to build integrity and collaboration in the international trade value chain.

Aniebonam said “So I look forward to seeing the Customs and CRFFN entering most strategic partnership with a view of increasing productivity in the port industry and this is very critical and that should be done as fast as possible”.

He reiterated that the process of collaboration among the two agencies of government will further add value and boost revenue collection for the government. While calling on the federal government to review its engagement with neighbouring countries in a bid to reopen the nation’s borders. Adding that the customs has huge roles to play in manning the borders alongside sister agencies of government.
He further noted that the borders are porous, but stressed the need for the frontiers protection by the relevant government agencies.

On the collection of the Practitioners Operating Fees (POF) by the CRFFN , Aniebonam stated that the associations would rally support for the Council to commence the collection of the controversial POF, but maintained that capacity building most be acquired by young freight forwarders and NAGAFF would support the CRFFN in it’s quest to collect the fees.

The NAGAFF founder reiterated that CRFFN is not a government agency and the association would continue to seek injunction up to the Supreme Court to know if the Council remains a private or government owned agency.

According to Aniebonam, “The council is a baby of NAGAFF ,the council was first introduced to the National Assembly by NAGAFF before Nigerian Shippers’ Council came to our aid.
The freight forwarding council is for the betterment of the young freight forwarders.”he said.

Dr Aniebonam lamented the various hiccups in the Nigeria ports industry, like bad roads, inability for government and its agencies to enforce the laws to punish culprits as the bane of the rot in the system, which has leads to people taking the laws into their hands. He called on all stakeholders and government agencies in the Maritime industry to play their roles effectively within the ambit of the law.