The outcry by Importers and their Agents over the Standards Organisation of Nigeria ( SON) frustrating the Ease of doing business and illegal extortion has continued to dominate maritime stakeholders discuss in the industry. 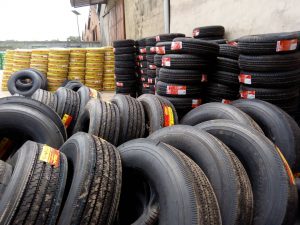 Aside from the collapsed of its portal which has led to untold hardship by Importers, our Correspondent also gathered that SON is alleged to be collecting a standard fee of N200,000 per container imported into the Country, whether its SON related product or not.

According to our source who doesn’t want his name in print said that SON collects N200,000 from every container that is captured in their system, even if not SON’s related products and that is not a new practice. And if any importer refuses to pay, their Enforcement unit will waylay such containers on the road and asked them to park for examination or rather take them to their warehouse for unstuffing and of course delay for the importer. According to our source in such a situation and to avoid undue delays and demurrage the importer have to pay the money. He asked “Is SON among the revenue generating agencies of government”?

Our findings also reveals that SON officials in the port convince with some importers of tyres to aid them bring in stuffed and substandard tyres unchecked to their warehouses in Nigeria.

These allegations is coming barely 48 hours, the Standards Organisation of Nigeria (SON) debunked claims by some Freight Agents over a purported collapse of its online application portal for the operation of Conformity Assessment Program (SONCAP) for processing of SON regulated imports into Nigeria.

A statement from the office of the Director General of SON, Osita Aboloma stressed that rather, it is those importers who fail to comply with the pre-shipment process who are crying wolf on accumulation of demurrage on their consignments. According to the statement signed by the Head, Public Relations, SON, Bola Fashina the portal was recently upgraded .

Some maritime operators who reacted to the SON’s defence frowned at the claims ,saying it is a ploy to cover up its shortcomings and competence .According to the stakeholders who spoke with our correspondent in Lagos, Thursday, the SON portal had collapsed since November, 2019, admitting that it was just fixed in February, 2020. Though SON agreed that it experienced a server breakdown, no detail was given as to how long it lasted.

Speaking on the development, Prince Bakare Adeyinka, the President General of the Nigeria Associationof Air Freight Forwarders and Consolidators (NAFFAC) in a chat with our correspondent lamented that the system collapse has already led demurrage at the ports. Adeyinka maintained that the ugly development has affected the businesses of both importers and exporters in the international trade chain .

According to him, billions of naira has been lost to the system collapse since it began stating that no agency of government has risen to the occasion. He expressed fear that the demurrage accrued from the breakdown will lead to increase in the price of goods in the market as importers will pass the extra charges to the final consumers.

His words, “The SON network downturn has been an issue for more than 3 weeks now and has affected a whole lot of importers and exporters in the port. “Billions of naira are lost on this on a daily basis. Nobody is checking or addressing it.

“That’s one of the greatest problems here. The shippers’ pay heavily and at the end it goes to the market and average person on the streets.”

Similarly, another freight agent who simply identified himself as Mr. Ibrahim Samuel confirmed that the issuance of SONCAP was a major problem in January but added that “Since on Monday it appears the system has been stable but for over a month running it was difficult to access the Pre Arrival Assessment Report (PAAR) because of the problem of SONCAP.

“All through January this year we find it very difficult to process PAAR because of the SONCAP application portal which made things difficult for us but the situation is back to normalcy at the moment.

He also frowned at the SON for claiming that there was no hitches except upgrading of the portal, noting that a simple apology to the trading public would have weather the storm.

On his part, Sadiq Aderibigbe told our correspondent that SON lied and that the stakeholders would continue to point accusing fingers at it for the irregularities.

“It is wrong for SON to say that there serve has no technical issues when hundreds of agents find it difficult to work. Imagine a situation whereby the server will be up today and few hours later it’s off”,he fumed.