Home » Maritime » IS OUR DUTY TO PROTECT NIGERIANS -SON, DG

IS OUR DUTY TO PROTECT NIGERIANS -SON, DG

The Director General of Standards Organisation of Nigeria (SON), Osita Aboloma has reiterated the organisation’s determination to protect the lives of Nigerians from consuming fake and substandard products. 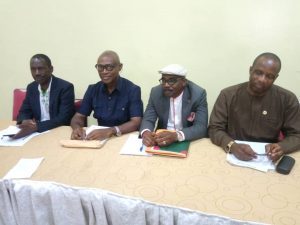 The SON boss make the declaration at a sensitisation workshop organized for maritime stakeholders yesterday in Lagos by the agency. 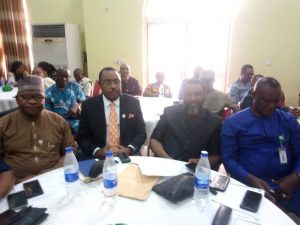 Aboloma who was represented by Engineer Obiora Manafa, Directorate of Inspectorate and Compliance said that the workshop which mostly have Association of Nigerian Licensed Customs Agents (ANLCA), National Association of Government Approved Freight Forwarders (NAGAFF) and leaders of other trading groups in attendance is to sensitise them as they stand as the links or middle men between the importers and the regulatory bodies.

The theme of the workshop which was ” Facilitating Trade through SON Automated Services ” harps on Compliance to standards and using the SON’s seamless trading portal to obtained all needed documents before importation of any product’s into the country.

Aboloma said the organisation recently upgraded its SONCAP portal to enhanced service delivery and reduced human interaction to the barest minimum. “It is important to mention at this point that SON recently upgraded its Portal for the operations of SONCAP to enhance service delivery, promote quicker turnaround time and reduce human interaction to the barest minimum.

” Our Portal has been running seamlessly since then. Only those who fail to adhere to our offshore Conformity Assessment Program and documentation would have reasons to complain. Our application and approval processes for SONCAP is seamless.

” We urge all importers to process their SONCAP or Import Permit operations as
applicable as they are pre-shipment processes and avoid a situation where
products arrive the shores of Nigeria without SONCAP Certificates or Import
Permits.”

The SON, DG also recognises collaboration as the key to the success of SON in its pursued of implementing its policies and programms.

“Collaboration is the key to success since SON cannot do it alone, to achieve zero substandard import. Please join us to sensitize and educate the importers and general public on the importance of quality goods and services.

” The works of standardization, quality assurance as well as campaign against
substandard products have always remained a collaborative and partnership efforts between the Standards Organisation of Nigeria (SON) and the numerous stakeholders.

“Again, over 75% of the bulks of products that enter into Nigeria daily, monthly or yearly come via the Nation’s Seaports and Waterways. It would therefore be difficult to ignore the Maritime Sector operators in the quest for zero imports for substandard and unwholesome products as well as the Federal Government’s Ease of Doing Business (EODB) Policy.”

He said the workshop will among other things provide cross fertilization of ideas, views , suggestions and solutions on how to move the Nation’s Maritime sector forward especially in these days of Federal Government’s Ease of Doing Business,E-clearance, Destination Inspection and on-going repositioning of the Nation’s ports.

Aboloma lamented that the non-involvement of SON at some Ports in the country operations has continued to pose challenges particularly to the agency’s compliance and monitoring unit as according to him It is easier to fight the influx of substandard products at the points of entry than chasing them around all over the country in markets, warehouses, etc.

In his presentation, the National President of ANLCA, Iju Tony Nwabunike said that his members sees their profession, not only as a means of livelihood, but also as a way of contributing to national economic, social and total well being of consumers and as a result of this, are the unsung ethic of promoting standards and best practices across various areas in the course of carrying out their cargo clearing functions at the seaports, airports and border stations.

Nwabunike lamented that Customs Brokers have always been at the receiving end of importation of substandard and fake products as they bear the risk and consequences when such products are either seized or destroyed.

” Over time, the customs brokers have been victims of substandard importation by importers who, in some cases, failed to disclose to us the actual content or degree of compliance with extant rules like SON Confornmity Assessment Programme (SONCAP).
You will also agree with me that the influx of these illicit products, in addition to being injurious to our national economy, also spells doom for our people. A proverb among the lgbos says “When a man throws a stone into the market, he does not know whether it is his mother or another close relation that would be hit by the stone’.

” In view of copious challenges faced in our line of business, we have taken it upon ourselves to educate importers on the need for their compliance to safeguard lives and avoid losses emanating from seizures and destruction of fake and substandard goods.
This task is daunting, but we are not relenting because customs brokers have suffered an estimated cumulative losses amounting to over N20b in the last ten years for undertaking to clear goods discovered to be substandards.

“Let me put it clearly, that upon seizure of suspected fake or substandard goods after payment of duty, it will be easier for a camel to go through the eye of a needle than for an importer, whose consignments were seized to pay you the balance of the agreed sum even after the broker has spent his money on the logistics.

As a way of contributing to the actualization of government’s ease of doing business and trade facilitation objections. I call on the Nigeria Customs Service to quickly integrate SON into its upgraded home grown technology platform, Nigeria Customs Information Systems (NICIS II).”

The ANLCA president commended SON for the good works they have been doing and urged all to support them. He called on the organisation to established its laboratories in all the six geopolitical zones to ease product testing, while also urging SON to make the stakeholders meeting a regular exercise.

Dr Boniface Aniebonam, the founder of NAGAFF and Chief Eugene Nweke , former president of NAGAFF also lend their voices to importers and their Agents conforming to SON’s processes of Standards before bringing in their goods into the country.
Officials of SON from the SONCAP, Ports and Borders and Inspectorate and Compliance Directorates also educate stakeholders on the various processes and procedures to be taken both seamless and manual before and after importation for their goods to be free from SON’s custody.