…As NSCDC, others are accused of Connivance 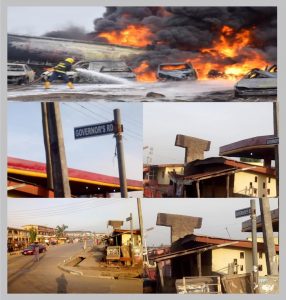 Pipeline vandalism in Lagos State has become a recurrent issue, and except urgent steps are taken, Ikotun in Igando/ Ikotun Local Council Development Area may be in the news soonest with a more devastating human and material losses than the Abule-Ado explosion. Writes Chikem Onyenomnachi and Ambrose Nnaji 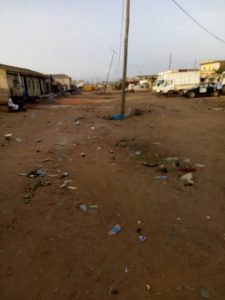 The activities of some miscreants and commuters of social vices that siphone petroleum products from the Nigerian National Petroleum Corporation (NNPC) pipeline that passed through Omoboriowo and Prince Adeyemi Streets off Governor Road Ikotun is a tickling time bomb as there seems to be a leakage at their operating site at the moment.

According to residents who live at the popular Governor Road and within the neighborhood of the NNPC pipeline, they hardly sleep with their two eyes closed since they do not know the hour the vandals would struck adding that no week passes without these hooligans coming to suck the petroleum product except for the last two weeks.

From all indications, they know the day the fuel product would be pumped to the Ejigbo petroleum depot, on such days, they would definitely operate, a middle aged man who lives around the area and would not want his name in print disclosed.

Giving a graphical description of the operation of the criminal elements, the witness who said he packed into the area about seven years ago had observed the activities of these men reoccurring unchallenged in the last 5 years. According to him, they have been operating in a commando manner adding that residents of the area now live in apprehension and are afraid to talk.

“They have been siphoning fuel from the other side of the Governor road towards the Ejigbo axis, towards the foam shop. It was last year they moved over to the Ijegun axis of the road near the Mosque and opened up the place.

“When they started sometime in November 2019, they came like four times with some machines, they dug a hole in front of the shops here(near the Mosque) inside the hole, they launched what seems like a drilling machine because it made noise when it met the pipe”, he narrated.

Nation Update gathered that these men had created their permanent siphoning tap that gives them easy access to extract fuel whenever it was pumped. Sources revealed that within the period they were coming to fix their nozzle, their operations were carried out between 1:00am to 2:00am.

The witness said that since after opening up the place, they have been coming very often. He suspected that the law enforcement agents in the area and some of the artisans that have their workplaces on the pipeline including some residents are either accomplices or collaborators in the illegal business.

“All involved here are syndicates, the police here are well involved. Two or three days to the day they would operate, the police would start arresting people within this area from 8:00pm to instill fear in them, thereby discouraging residents from staying outside or coming into the area late, at such times, nobody around here would dare come back late from work,” he stated.

Also, an entrepreneur in the area who preferred anonymity said although it would appear they have missed the first boat, but they have done so much in the last four years to stop this ticking time bomb, but it’s clear to them the low and the mighty are all involved in the business, they have conspired to endanger the poor and innocent citizens in the area.

“It’s like the government has closed its ears, society have conspired against us, the media including the social media are waiting for the day the big story would break, the day lives around here would evaporate, homes would turn to wreckage, businesses would vanish, when this place would replicate the debris of a war zone, then the government will come in and acquire our lands.

“We have made several contacts to the powers that be, at some points, we got threats to desist from our action that they have the NNPC, the law enforcement officers around here working with them,” he said.

The witness said during the various operations of these hoodlums, they would have uniformed men, the Civil Defence, army and police with them and no one dare come outside or flash a torchlight from their houses within 100 to 200 meters they operate.

“Their activities last between 1hour 20minutes to 1hour 45 minutes. Within such periods, hardly a day they come without loading at least seven tankers of 66,000 litres not the 33,000 litres.” he narrated.

Also a landlord in the area who said they live in fears added that they are mostly afraid over the attacks that plays out around the area.

According to him, it is so disheartening that any day operation of these men would go on, all the known phone numbers of the security personal in the area would be switched off.

“Any day of operation, if you call the phone number of the security operatives in this area, it would be switched off, immediately after the operation, their numbers would come to life.

“It’s within the period they must have finished their operations, all the law enforcement officers will be throwing themselves upon each other in the area, creating an unnecessary scene, blowing siren here and there, firing bullets in the usual ‘way them! Way them’, mere deception.

“My fear is that now they are operating along this Ijegun axis unlike the Ejigbo axis they have been in for years, there is the likely chances that any day fire breaks out, Ikotun local government secretariat and the Ikotun market would all be consumed because the gutters here slope to Isijola street down to the first Bank and to the market.

“The damages that would follow any fire outbreak here will be more devastating than the Abule-Egba, Ijegun and the most recent Abule-Ado explosions.

He bemoaned that if the situation here were to be temporary challenge, they would have counseled patience and prayer for it to end but it’s a lingering time bomb.

A security personnel who works within the area said the men were so wily in their act that all the tankers they would come with would neither be branded nor have any plate number on them.

He stated that the activities of the men are beginning to cause tension and fear in the area. He recalled that within the period they were operating on the Ejigbo axis, there was a day a call was put across to the source of supply, Apapa and to NNPC office Abuja rather than that scare them away, it got them emboldened, as they started coming the other days.

However, he thinks it’s now time for the residents of the area to either hang together or die separately.

He stated that most of the residents that have tried using their phone numbers to call law enforcement agents in the time past to come and salvage the situations would eventually receive threats from the vandals.

“I think the major reason they have relocated to the present place they are now on Omoboriowo Street close to the Mosque is because that place makes escape very easy for them.

“You know Governor Road is so smooth and makes for easy access to the Egbeda/Igando express road to wherever they are going if at all they don’t have filling stations around here where they offload to,” he said.

Another resident said the situation has caused him high blood pressure because he sees them from his rented apartment close by whenever they are on their operation.

His doctor has advised him to take his mind off the situation, according to him, how would that be when he has his children and aged sick mother around, when he knows that once there is a spark, they are all consumed.

Everyone is afraid because we know these people can kill any one that stands on their way. Even the vigilante group that has its office around has not been able to help.

“Even me talking to you I am endangering my life and yours also, I also believe that whatever step you may take would eventually make them come aggressively, we don’t have any government, they are all working together, don’t be deceived,” he said.

It would be recalled that in the month of March an explosion occurred in Abule-Ado area of the Lagos state though there were different opinions as to what actually led to the blast. Nevertheless, at the end several people lost their lives including school children and property worth billions of naira were also destroyed in the process.

Also speaking, a landlord in the area, Mr. Michael Mayaki said all the boreholes in the area are contaminated as a result of the activities of the vandals which must have ruptured the petroleum pipes, and has caused fuel to stream into the ground and mix up with their water.

He expressed the concern that there could be upsurge of epidemic in the area, “source of water of residents of this area including that of the Central Mosque here are all contaminated, health officials have advised us not to drink from it, cook with it and not to bath with it. We are in a precarious situation here.

“Letters and contacts have been made to the Igando/Ikotun LCDA, Ministry of the Environment, Lagos state government secretariat had been brought to the known, NNPC has also been contacted, and nothing has happened,” he expressed.

He nonetheless, called on the powers that be to take drastic action against vandalism to reduce the suffering of people in the areas where the pipeline passed through especially the Alimosho area of the Lagos state which has been described by the chief operating officer, downstream, Nigerian National Petroleum Co-operation, as very prone to vandalism and pipeline explosion.

The Lagos State Emergency Management Agency (LASEMA), has slso called on Lagosians to always make haste to report to them any suspicion of pipline vandalism in their areas.

When contacted, the General Manager of LASEMA, Dr Olufemi Oke-Osanyitolu, sought for description of the area.

The Lagos State Public Relations Officer(PRO) of the Nigerian Security and Civil Defence Corps(NSCDC) denied complicity of its men in the unwholesome allegations.

According to the Assistant Public Relations Officer of the Command Ikenna Odinna who spoke to journalists at their Alausa office, the allegation against its officers in the area he said were false.

He said, ” the allegations against our men are absolutely not true, the pipelines are critical national assets, as such we can’t compromise the federal government. Again i challenge you, if there is issue of ruptured pipe, its the responsibility of the NNPC.”

All efforts to reach the Lagos State Police Public Relations Officer(PPRO) Bala Elkana was unsuccessfully, calls to his known cell phone number did not go true, text and whatsApp messages to him were not responded to.