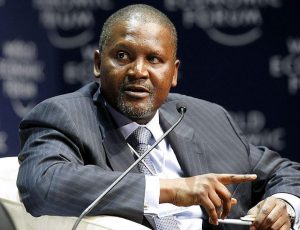 The workers of DANGOTE refinery located at Lekki part of Lagos state are protesting maltreatment and forcefully locking them up to work despite the closing of all companies during the Coronavirus pandemic lockdown in Lagos State.

The workers mostly Indians in a viral video accused Power Mech Company of not paying them for three months, but rather exposing them to danger by forcing them to continue working despite the Covid19 pandemic.

A group of Indians among other workers who are forced to work inside the refinery complex despite the lockdown in Lagos were seen lamenting and calling for rescue in a viral video.

The Indians who spoke through their representative in the video said
” Dear brothers, we the citizens of India are speaking from DANGOTE refinery which is situated almost 60kms away from Lagos in Nigeria.
The whole world is suffering from Coronavirus which is a global pandemic. During this situation of lockdown, the workers of Power Mech Company are being forced to work. The staff here are forcing us to work through physical violence.

” We request the Prime Minister of India, Mr Narendra Modi j and the Home Minister, Mr Amit Shah Ji to help us in this situation. The people here are forcing us to work by taking us out of our rooms and pushing us into the bus in order to make us work. The company responsible for this is the Power Mech Company. There are many other Indian companies in Nigeria, but none of the workers are being forced to work . All the other companies are abiding by the rules of the lockdown .The other workers are safe and secure and are staying in their rooms.

” The Power Mech Company has not provided any security for us and there is no food arrangements made for us. The food which is given to us is worst than those of animals. The workers here have not received payments since three months. This situation of pandemic, they are not saving us from the disease , but are trying to kill us of this disease and are pushing us into it, so that we die.
We request our Home Minister , Mr Amit Shah and the Prime Minister, Mr Nerenda Modi to kindly understand our problems and help us get out of this situation” the Indians cried out.

Our source who works in the company said since the declaration of the lockdown by President Muhammadu Buhari in Lagos a month ago, the workers at the DANGOTE refinery were locked inside the refinery premises to continue working.
He confirmed that the practice of the major contractors handling jobs at the site is that, they don’t pay their workers until after three months.
Our source also said the workers there are mostly dominated by Indians and Chinese and both nationals have brought in most of their indigenes to work there.