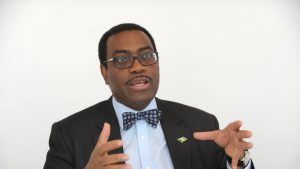 Within three years of his first term, President Adesina embarked on bold reforms of the Bank. On his watch, the Bank has been substantially repositioned globally, and he has driven highly impactful programmes that are accelerating the development of the continent. A passionate and visionary leader, President Adesina says “We are fast-tracking Africa’s development”.

Since his election as President, the Bank has maintained its AAA rating by all the four major global rating agencies, four years in a row. This is a reflection of the Bank’s sound financial and risk management, excellent liquidity and strong shareholder support.

The highest allocation from net income to reserves ever in the history of the Bank was reached in 2017, for an amount of $190.35 million.

“Publish What You Fund” ranked the Bank in 2018, as the 4th most Transparent Institution among 45 global institutions.

In 2018, the Bank recorded an unprecedented first, when it was ranked Number 1 by the Multilateral Organization Performance Assessment Network (MOPAN), a position jointly shared with the World Bank.

Adesina’s reforms, undertaken as President of the Bank, areshowing excellent results. The Bank has been effectively decentralized to get closer to its member countries and clients. It has opened 5 regional Development and Business Delivery offices in North Africa (Tunis), Southern Africa (Pretoria), Central Africa (Yaounde), East Africa (Nairobi), and West Africa (Abidjan); with five Director Generals appointed to run these offices.

The Bank was ranked 4th among the top 100 African employers that people want to work for in 2018; a huge jump from the Bank’s ranking of 82nd position in 2015.

The Bank is efficiently managed and has the lowest administrative cost per adjusted common equity among all the multilateral development banks, globally, at just 2%. While the cost to income ratio of the Bank is 41%, the comparable figure for the World Bank is 113%, meaning the African Development Bank is 3 times more efficient on its administrative costs compared to the World Bank.

Today, the Bank is at the forefront of helping Africa achieve accelerated development. The Bank’s High 5 strategic priorities: Light up and Power Africa; Feed Africa; Industrialize Africa; Integrate Africa; and Improve the quality of life of the people of Africa, have been acclaimed globally as the key for achieving the Sustainable Development Goals in Africa and the Agenda 2063 of the African Union. Independent analysis by the UNDP shows that achieving the High 5s will help Africa to achieve 90% of the SDG targets and 90% of the Agenda 2063 goals.

Within four years of the Presidency of Dr. Adesina, the Bank has achieved huge developmental results. The Bank has helped to support:

The Bank successfully completed a historic 125% General Capital Increase (GCI7) in October, 2019. The authorised share capital of the Bank increased from $93 Billion to $208 Billion, the highest in the history of the Bank since its establishment in 1964. Following the approval of GCI-7, the Bank will help African countries to achieve the following development results in the next 8 years:

In May 2018, Michigan State University, USA, awarded Dr. Adesina a Doctor of Agriculture Degree. In October 2018, the Nigeria Defense Academy conferred a Doctorate of Management to Dr. Adesina. In June, 2019, the University of Alberta, Canada awarded Dr. Adesina an Honorary Doctorate while in January 2020, the Federal University of Agriculture, Abeokuta, Nigeria also conferred an Honorary Doctorate on him.
In October 2017, the World Food Prize Foundation awarded Dr. Akinwumi Adesina the World Food Prize, generally known as the “Nobel Prize for Agriculture”. Dr. Adesina devoted the entire $250,000 Laureate award prize to establish a fund to support youth in agriculture and to develop a new generation of world hunger fighters. On October 23, 2017, Purdue University, USA decorated Dr. Adesina with its highest honors, the Order of the Griffin, a rare honor given only to 50 persons since 1893, including Neil Armstrong, the first man to walk on the moon.

In December 2017, Bill Gates listed Adesina’s award of the World Food Prize and his gesture to use it to support the youth in Africa as one of the seven most encouraging moments of 2017.
In December 2017, Dr. Adesina was ranked in the top 15 of the 100 most influential global leaders of multilateral development organizations. In February 2019, Dr. Adesina was awarded the prestigious Sunhak Peace Prize in Seoul, South Korea, for his global leadership on agriculture, food security, transparency and good governance. Once again, he dedicated his entire $500,000 award to the World Hunger Fighters Foundation he established to fight global hunger. In April 2019, Dr. Adesina was ranked among the 100 most reputable people in the world.

Dr. Adesina is a globally renowned leader. In 2010, he was appointed by the United Nations Secretary General, Ban Ki-moon, as one of 17 world leaders to galvanize international support for the United Nations Millennium Development Goals(MDGs). He serves on the Global Panel on Agriculture and Food Systems for Nutrition.
In 2013, Dr. Adesina won the Forbes Africa Person of the Year award for his bold reforms in Nigeria’s agriculture sector;the first public sector Minister in Africa to win the award. The influential Leadership Newspaper in Nigeria selected him as the 2013 Public Servant of the Year, for his bold policy reforms, transparency, and public accountability.

In February 2020, Dr. Adesina was named the African of the Year by the Forbes Africa Magazine. He also won the Africa Person of the Year award by the Africa Leadership Newspaper Group in an open third party voting across Africa, where he won over 60% of the votes.

Dr. Adesina’s accomplishments and devotion to pan-African development have also been recognised by several nations. In 2012, Dr. Adesina was conferred with Nigeria’s second highest National Honor, the Commander of the Order of the Niger, for his outstanding service to his country, Nigeria. In recognition of his outstanding leadership, passion and dedication to accelerating the development of Africa, he has also been awarded the highest national honors by the Presidents of Senegal, Madagascar, Togo, Liberia and Niger, respectively.

His excellent performance as President of the African Development Bank, the impressive financial performance of the Bank, strategic global positioning of the Bank to drive the achievement of the African Union’s Agenda 2063, his excellent working relations with African governments, and bold efforts to drive significant investments into Africa, led to his unanimous support and endorsement by ALL 55 Heads of State and Governments for second term as President of the African Development Bank. It was an unanimous decision of the Africa Union. This demonstrates the level of excellent support he has in Africa and the very high level of respect he is held by all African countries.

That was again shown by the incredible leadership and efforts that Dr. Adesina deployed to design with his staff financing at scale to support and protect Africa at this time of the coronavirus pandemic.

The African Development Bank launched on March 26, 2020, a $3 billion “Fight COVID-19 social bond on the international capital market. It was so successful, raising $3 billion in just few hours at the interest rate of 0.75%. It is the largest US dollar denominated social bond in the history of the world, and the largest by the Bank since its establishment in 1964. The bond is now listed on the London Stock Exchange.

He went further and led the design and development of the Bank’s COVID19 rapid response financial package. Against onslaughts and roadblocks by non-regional members of the Board of Directors, he was tenacious, patient and bold in his defence of the need to protect and support Africa, to the maximum possible. The Board of Directors finally agreed and approved the $10 Billion Covid19 response facility of the Bank, which was announced on April 8. This is a bold and unparalleled support for Africa. This is the man that is called the “Africa’s Optimist in Chief”, who ceaselessly fights for Africa, speaks for Africa everywhere globally, while accelerating the development of the continent.