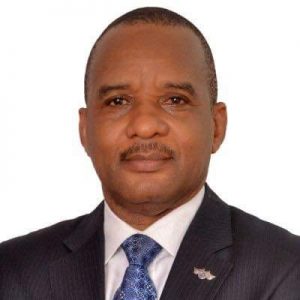 The Nigerian Maritime Administration and Safety Agency (NIMASA) in the last 100 days of the Dr Bashir Jamoh’s administration has hit the ground running with coordinated maritime Security, Safety and Shipping Development (3S) strategy to rejig the sector as dependable and money spinning for the Nigerian economy. 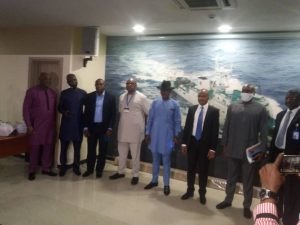 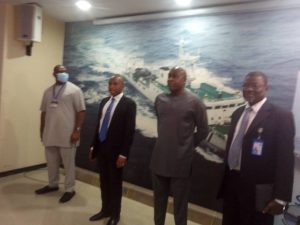 The Director General of NIMASA, Dr Bashir Yusuf Jamoh with his Executive Directors while briefing journalists on his scorecard in his first 100 days in office said, the agency is now repositioned to tackle the myriads of challenges facing the sector head long and make it lucrative for maritime business to strife.

Dr Jamoh who talk on sundry issues and his administration efforts in tackling them dwells on the following:
MARITIME SECURITY ( TACKLING PIRACY)
Jamoh said a total of 27 alleged pirates were apprehended in the last three months. According to him, 17 are in the custody of the Nigerian Police, while 10 were arrested by the Nigerian Navy in Collaboration with the agency and they are facing prosecution in accordance with the anti piracy law.

He hinted that since 2016, not until last two months , no single pirate has been arrested in Nigerian waters.
He said , the feat was achieved by a joint efforts of the NIMASA, Nigerian Navy and the Nigerian Police, narrating that every agency involved share information at different levels which led to the arrest of the culprits.

According to Jamoh, 156 personnel comprising of NIMASA staff, Navy, Police and NPA have so far been trained to battle criminality in Nigerian waters.
He also said these agencies all have their own platforms , but that they are working together to harmonised all the platforms so as to have a more coordinated strategy.

Jamoh further said that the NIMASA Regional Maritime Coordination Centre (RMCC) located at Kirikiri area of Lagos state which is suppose to coordinate maritime information among Nine African Countries in the West and Central African region will resumed functioning by September.

The NIMASA boss hinted that before the end of October 2020, the first leg of beneficiaries of the Cabotage Vessels Financing Fund (CVFF) will get their funds . He said ” Have just been appointed the Chairman of the CVFF disbursement committee by the Minister of Transportation. We are working to disburse the CVFF, before October, we will disburse the first leg of the fund to beneficiaries ”

DEPLOYMENT OF CONTROVERSIAL NIMASA FLOATING DOCK:
The NIMASA, DG said the agency and the NPA are almost finalising arrangements to deploy the floating dock to the Continental Shipyard owned by the NPA under a Public Private Partnership (PPP) arrangement.
Jamoh said, already oil/gas majors are ready to dry docked their ships with the facility and is expected to generate over N1billion annually and over 350 workers will be employed, adding that the floating dock will serve Nigeria foreign exchange and generate more revenue to government as well as served as seatime training of Cadets in mechanical and electrical fields.

DEEP BLUE PROJECT:
On the commencement of the Deep Blue Project, Jamoh said over 85% of the project have been achieved. According to him out of the 17 Special Mission Vessels ordered, 14 have arrived,the armoured vehicles are ready, two Special Mission Aircraft are expected in October, while the three Special Mission Helicopters ordered are expected to arrived in January 2021.

The NIMASA DG, went memory lane by saying that , the Global West Vessels Limited ,who were formerly contracted by the agency to provide platforms, generate revenue under ” No Cure, No Pay” and tackle piracy in Nigerian waters had 25 boats and that some of the boats are in the custody of the Economic and Financial Crimes Commission (EFCC) for investigation.
Based on this, Jamoh said the agency went to ground zero in terms of platforms and equipment to fight piracy. But he assured with the arrival of these platforms the agency is set to battle criminality in Nigeria waters and generate more revenue, emphasising also that, the Deep Blue Project will provide training and employment to the teaming Nigeria youths.

He said the only aspect of the project remaining now is the training of personnel that will manned the platforms, as according to him due to the Covid19 pandemic, the training could have commenced which comprises of both foreign and local trainings.

COVID19 PALLIATIVES AND INCENTIVES TO MARITIME OPERATORS
Jamoh said the agency has presented a proposal to the Transportation Minister for approval and he hopes it will be approved, assuring that if palliatives are being approved for other sectors of the economy, he hopes the industry needs incentives to cushion the effect of the Coronavirus pandemic.

Jamoh also said the agency is engaging all stakeholders, including the media to rejig the industry for grater performance.
While calling on the maritime media to be objective in reporting the sector. ” If we do well tell the world, if we fail to perform tell us” Jamoh said.