Home » Maritime » Customs » HALF YEAR REPORT: FOU ‘A’ RECOVERS N17BN WORTH OF GOODS, REVENUE FROM SMUGGLERS

HALF YEAR REPORT: FOU ‘A’ RECOVERS N17BN WORTH OF GOODS, REVENUE FROM SMUGGLERS 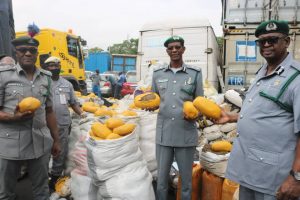 The Federal Operations Unit (FOU), Zone ‘A’ of the Nigeria Customs Service (NCS) has so far raised Debit Notes on imported items which beats the various ports Valuation Units to the tune of N17billion between January to June 2020. The Debit Notes were raised on imported goods which were under declared to pay lesser Customs duties. 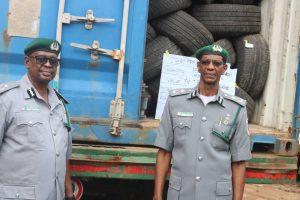 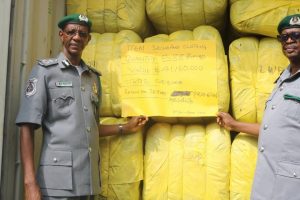 Addressing the Media in Lagos over the weekend, the Customs Controller of the Unit, Acting Controller Usman Yahaya said a total of N15.6billion was generated from contrabands seized from smugglers while N 1.4billion were raised from wrong classifications ,transfer of value and false declaration of cargoes.

He said , “the total duty paid value of N15.6bn were premised on seized contrabands, while N1.3billion were revenue from the Unit’s interventions arising from wrong classifications, transfer of value and false declarations by importers. So, a total of N17billion was recovered for the Federal Government in the period under review.”

According to the DC Yahaya, the Unit also intercepted a truck load of banned textile materials worth N565million Naira imported from Benin Republic.

He further disclosed that 18,760 bags of foreign parboiled rice smuggled into the country from Benin Republic and 64 units of exotic vehicles were intercepted and detained for duty evasion and under payments within the the same period.

A quick glance of the spectacular seizures report from 7th January, 2020, shows 64 exotic vehicles including two bullet proofs, 18,760 bags of 50kg of foreign parboiled rice valued at N469million, 1,338kg of Indian Hemp worth N201million and 147 sacks (9,504kg) of Pangolin scales worth N10.4billion.

Also intercepted are 5,423 kegs of Vegetable oil valued at N87million, 7,549 jerry cans of Petroleum Motor Spirit (PMS) valued at N27million, five containers load of Pharmaceuticals valued at N2.9 billion, 64 units of motorcycles used for smuggling valued at N565million among others.

Yahaya who was angry with the activities of the economic saboteurs, however warned smugglers to embrace legitimate businesses as the Unit is ready to send them out of their illegitimate business.
He also disclosed that the seizures so far made was borne out of intelligence and hardwork of eagle eye Officers and Men of the Unit.

“My message to smugglers is that they should stop smuggling and embrace legitimate business because the FOU is ready to run them out of business,” he warned.

“We are always a step ahead of them through intelligence gathering and steadfastness. We won’t get tired until the Service suppressed smuggling finally from the South West,” he assured.