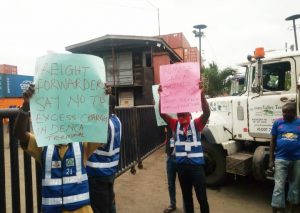 The face- off between the National Association of Government Approved Freight Forwarders (NAGAFF) and Denca Bonded Terminal is taking a new turn as the NAGAFF 100% Compliance team has given the management of the terminal a month ultimatum to fixed its terminal of faced sanctions.
.
National Coordinator of the 100% Compliance Team of NAGAFF, Alhaji Ibrahim Tanko has also denied the allegation of extortion as being alleged by the Denca terminal. He however said that the team was formed out of the need to comply with laid down rules and regulations of the federal government as far as clearance of cargo is concerned.

Tanko, a Deputy President of NAGAFF, also assured that the compliance team was never to usurp the functions of the Nigerian Shippers Council (NSC) or the Council for the Regulation of Freight Forwarding in Nigeria (CRFFN).

According to him, the compliance team have now issued a one month ultimatum to Denca Bonded Terminal at Amuwo-Odofin, Lagos to upgrade its facilities or risk been picketted again by freight forwarders.

Tanko slso debunked the allegations of extortion against the compliance team by Denca Terminal, challenging the management or affected stakeholders to come forward with any evidence of such.

Tanko also shows a video evidence made available to journalists in Lagos on Thursday on how the freight forwarders had carried out a peaceful protest at Denca Terminal. While a second video clip shows the General Manager of the Terminal appealing to the Freight Forwarders.

This was against earlier claims made by Denca that the group was trying to forcefully gain entrance into its terminal.

Tanko lamented that after years of complaining to the Nigerian Shippers Council on the anomalies practiced by terminal operators, nothing has been done. He said that freight forwarders have now decided to take their destinies in their hands.

“We are not the ones agitating for compliance, it was the government agencies, they are; Customs, SON, NAFDAC, NDLEA, Police and others. They insisted that there must be compliance to extant laws.

“We at NAGAFF decided to form a compliance team within ourselves, we started with our primary constituency which is the importers, we spent two months having series of meetings and comapaign urging them to make honest declarations “

“We came back and started campaigning to our own members to join the train of making correct declarations. Leaving there, we are now telling terminal operators and shipping companies to also do the right thing”

“Every Bonded Terminal licensed, there is a procedure to it, but most of them did not follow the required guidelines”

“Denca Bonded Terminal is shameless, you dont have what it takes to own a bonded terminal and yet you went ahead to bribe people to stem cargoes to your terminal”

According to Tanko, Denca terminal does not have forklifts to handle containers, he said that most times, it had to go out and rent one and that in the process of waiting, freight forwarders are made to pay outrageous charges and huge demurrages for the delay.

He also insisted that the floor of the terminal is unpaved and containers cannot be positioned during raining seasons.

Tanko alleged that vessels are allocated to Denca Terminal even when existing cargoes at the terminal have not been evacuated successfully, he said the terminal lack equipment to position or load containers.

“They would be charging us on a ship or container that is yet to even arrive the terminal from Apapa wharf, who is extorting who? Chairman of Denca terminal is a member of ANLCA, he is the one extorting freight forwarders”

“We have given them one month, by ending of this month, for them to make sure they have equipped themselves and fix their terminal, if not, we are going there again for protest”

The NAGAFF Deputy President said that the team is tackling the illegal transfer of containers to bonded terminals without consulting the importer. According to him, it is the right of importers to destine their imports to any part of the country they want.

Speaking he said “Anybody telling you that there is congestion at the port, it is a bloody lie, what we have at the port is overtime cargoes which they have refused to stem to Ikorodu warehouse. After 90 days, a container has become overtime and should be taken out of the port”