Within a month 3x40ft of Tramadol and other banned drugs have been intercepted by other agencies of government outside the ports, despite the Nigeria Customs Service (NCS) numerous anti -smuggling Units mounting check points within and outside the ports.

With this trend of intervention by other agencies outside the ports , one wonders how many of such illicit drugs have left the ports into the Nigerian markets unnoticed. 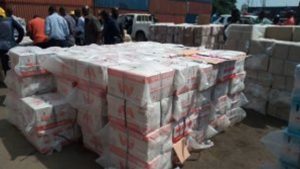 Many stakeholders have attributed the recent turn of event in the release of Tramadol and other banned drugs from the ports without trace to either the compromise by the Customs Area Controllers (CAC) involved or lack of proper supervision by the Customs Management.

Some also said maybe because the Area Controllers have stayed too long in the Commands and have lost focus as the CGC, Col. Hameed Ali (rtd) have refused to redeploy them, after some have spent over four years in their present Commands.

Sadly, for the NCS whose anti -smuggling war was at its peak has fallen to a level where the Nigerian Police are getting credible information, waylay containers of Tramadol outside the ports and the Customs cannot figure out or give satisfactory reasons how and why such containers exited the ports without being intercepted by the Customs officers.

Implicative enough, 2x 40ft containers of such illicit drugs have exited the Apapa Port Command within three weeks without any trace of how and why it happened. No explanation from the Command and yet neither the Controller nor the Officers who are responsible for the escaped of these Containers have been question or redeployed.

This has raised the suspicion that, either the Comptroller’ General of the Service, Col Hameed Ali (rtd) has lowered his guard of war on smuggling or is favourable disposed to corruption and some Area Controllers being untouchable by keeping them, despite commiting serious infractions.

On the 24th of July, 2020, two persons were arrested by the Area B Police, Apapa in Lagos State over the importation of some suspected fake and illiçit drugs into the country.
The suspects were apprehended by police operatives attached to the Area B Command, Apapa, Lagos, who intercepted a Seaco container loaded with the drugs.

It was reliably learnt that the suspects had clinically beat the operatives of the Nigeria Customs Service (NCS) Apapa Port Command, where the illiçit drugs were cleared without documentations.
The suspects were identified as Uchenna Oreator, who claimed to be the importer and Uche Nwankwo, said to have acted as Clearing Agent for the container.
Findings revealed that the counterfeit drugs were deceitful hidden under some cartons of scrubbing brushes in the container shipped from Asia.

It was gathered that a police patrol team discovered the container inside Eleganza Plaza in Apapa while it was offloading the goods into another truck with neither clearance from the Nigerian Customs Service (NCS) nor bill of Landing of the Container with number SEGU 6326800.Suspecting that the container might have left the Apapa port with Customs officers in the know.

The Police detectives on the instruction of the Area Commander, Olasoji Akinbayo, requested to see the Customs personnel escorting it to a BCT in order to know why it was diverted to the plaza but there was none.

Consequently, the two trucks with registration numbers KTU216XG and SNK700XV which was used in transloading the drugs were impounded and a search conducted on them only for the police to discover abortion Pills, Tramadol, cough syrup with codeine which are contraband drugs as well as suspected adulterated GSK and other brands of medications.

However, our Correspondent gathered that the NAFDAC number 04-4162 on Efrose Gynaecosid, a drug primarily meant for the treatment of amenorrhea but illegally used as abortion pill might were fake.

Investigation also revealed that the counterfeit drugs were produced in Pakistan and a regular practice by dealers who flood Nigerian markets with lesser quality of branded medication to make profit. It was learnt that these dealers operate in cohorts with terminal operators and Customs officers who usually assisted them to move their containers unnoticed.

Speaking during a chat, the importer Oreator Uchenna said he received the drugs from Pakistan at cheaper rates and was introduced into the business by some operators in the market.
He claimed to have gotten the consignments on credit and was expected to pay the company in Pakistan after he must have sold them.

Asked how the container left the APMT Terminal at the Port without relevant documents, Oreator said he did not know as his Agent was the one he sent the money and other necessary details to.
Our correspondent gathered that the NCS has been contacted for clarifications on the name and address of the company or individual who applied for the transfer of the container to a Bonded Terminal from APMT Terminal Apapa; copy of the approval for the transfer of the container to the Bonded Terminal; name and details of the officer, who was supposed to escort the container to the Bonded Terminal and details of NCS officers that were on duty from Saturday, July 18 to early hours of Monday, July 20, when the container was found inside Eleganza Plaza, Apapa.
The Apapa Customs Command did not reply to our Correspondent enquiries on the Customs findings on the matter.

Also, the Commissioner of Police, Lagos State, Hakeem Odumosu directed that the investigating team should establish from the NCS whether duty was paid to the Federal Government if it turns out the container was not on transfer to a bonded terminal as claimed and what percentage of duty was paid on the goods declared in the bill of landing?
He also requested that NCS to provide the names and details of officers that inspected/examined the container including witnesses, duly signed documented records taken in the course of inspection by all who participated and if the container was stolen/diverted, evidence that it was reported and the details of the person who reported.
Confirming the arrest and seizures.

Police Public Relations Officer (PPRO) Bala Elkana said the Command has established contact with NAFDAC and the Customs Service in order to get to the root of the matter, adding that officials of NAFDAC would be required to inspect the drugs to ascertain the quality of the drugs.

“It is true that police operatives at Area B intercepted a container with suspected counterfeit and contraband drugs. The CP is not taking this issue lightly especially because of the dangers such items pose to health.
We have written Customs and NAFDAC. We are working with them on this case. Updates will be given later,” he said.
The spokesperson for NCS in Apapa, Nkiruka Nwala, when contacted denied knowledg of the incident.
She however assured that it would be investigated.

ANOTHER 1X40ft CONTAINER OF TRAMADOL INTERCEPTED BY BY POLICE
For the second time within two weeks, on August 6, 2020, the Area B Police Command intercepted another 1x40ft Container suspected to contained banned drugs .The drugs was believed to have been released by the Apapa Customs Command.

The container was intercepted on water and taken to a bonded terminal in Apapa.
A team of officers from Customs and the National Drug Law Enforcement Agency (NDLEA) joined the Area B Commander, Olasoji Akinbayo, an Assistant Commissioner of Police and Area Command.

Again the Apapa Customs Command did not respond to our Correspondent enquiries on the outcome of their investigation on how the container left the port without documents.

ANOTHER 1x40ft CONTAINER OF DRUGS SEIZED BY NDLEA
The National Drug Law Enforcement Agency (NDLEA) has uncovered another 40ft container loaded with Tramadol and other banned drugs at the Brawal terminal in Lagos.
A statement by the NDLEA Head of Public Affairs, Mr Jonah Achema, said the Chairman, Col. Muhammad Abdallah retired, disclosed this on Wednesday in Abuja.

Abdallah said that the seizure followed a recent one made by the police of a 40ft container loaded with cartons of brushes, cartons of tramadol and other banned drugs.The News Agency of Nigeria (NAN) reports that Police detectives in Apapa Area Command of Lagos State had intercepted a 40-foot container laden with drugs suspected to be tramadol and codeine on Aug. 6.

The container was intercepted offshore and taken to a bonded terminal in Apapa.According to Abdallah, NDLEA’s investigation further revealed another 40-foot container, adding that this joint examination also revealed 255 cartons of different types of tramadol and other banned medicines.

“The NDLEA investigation further revealed that the tramadol was manufactured in Pakistan, which is a new discovery to the agency because previous tramadol seized were manufactured in India.

“I must say that this is of global interest. Drug trafficking is one of the vices fueling insecurity across the country,” he said.

Abdallah observed that the investigation was a major breakthrough for the agency for revealing the new route for movement of tramadol into Nigeria which was from Pakistan via Europe (Hamburg) to Nigeria.“And knowing that these tramadols were concealed behind boxes of brushes, it has called for more concern,” he said.

Abdallah said that the NDLEA would do everything within its powers to get to the root of the drug trade and enjoined other security agencies to collaborate with the agency in its ongoing investigation.

He commended the Police, NAFDAC and other security agencies for their support on the case, adding that the agency would continue to carry out its statutory mandate to combat trafficking and abuse of narcotics