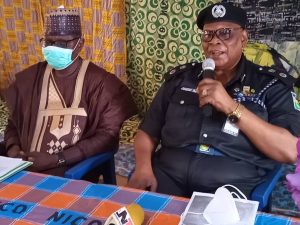 The National Institute for Cultural Orientation ( NICO) has raved up the use of indigenous Nigerian languages as a strategic tool to sustain and cultivate national integration and peaceful co-existence among Nigerians, with focal attention on the military, Police and Paramilitary personals living in the barracks.

Having identified the barracks as fulcrum to effective national security architecture, NICO leadership believes that the use of Nigerian indigenous languages will not only cement national unity, but would help in the ease of intelligence gathering and fostering of cordial relationship between the people and security agencies.

Ado Mohammed Yahuza appointed barely a week ago by President Mohammandu Buhari to turn around the fortunes of NICO, stated that Nigeria’s over 400 hundred indigenous languages are threatened and may go into extinction if concerted effort are not put in place to rave up use of indigenous languages as a means of communication.

Speaking at the premier Police Training College in Ikeja, Lagos State, the NICO boss explained that time has come for serious practical application and use of Nigerian indigenous languages in every day activities, hence the effort by NICO to target national security through the barracks all over the country as training grounds for the program.

The barracks initiative seamlessly driven in six geopolitical zones of the country, is breasting the tape for a second time, but this time retooled to effectively sustain the use and revival of Nigerian indigenous languages.

According Comrade Ado Mohammed Yahuza, the program was designed to address critical issues of language dislocation and its serious implications for Culture and national development.

He said “The alarm has been raised in socio linguistics circles that over 90% of the world’s 7,000 languages may go into extinction by the next century and worrisome is that indigenous languages such as Igbo and Yoruba may not survive the next fifty years if urgent measures are not put in place to reverse the trend” he explained.

Throwing more light on the NICO indigenous languages revival strategy, Comrade Ado Mohammed Yahuza noted that the first edition, captured students during long vacation, usually held in August every year. While the second edition was tailored for the working class during weekends and ongoing edition. Third in the series, captures use of indigenous languages in the barracks with an online edition as the fourth outing still in the pipeline.

He told the Commandant of the College and Commissioner of police in charge of the Police Training College, Officers and Men, that the barracks as mini Nigeria, would benefit from the language training program which will foster peace, unity and social integration.

” It will also enhance espirit -de-corp, promote cordial relationship between officers and their host communities and also enhance intelligence and information gathering”

In his brief remarks, Commandant and Commissioner of Police (CP), Police College, Ajani Olasupo, appreciated the NICO effort and called on the officers to take the program very serious, as it would help them settle down in areas of primary assignment and in information gathering.