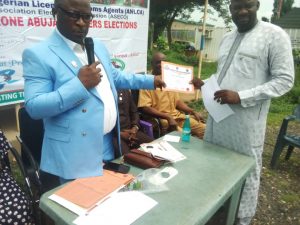 Fatinto who stood in for the President, witnessed the election alongside other National Executive Members (NECOM) at the chapter’s Secretariat within the airport premises. 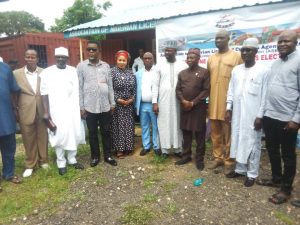 The Chairman of the ASECO, Barr. Raymond- Oyimbah, and the Secretary, Segun Alabi conducted the election which saw the incumbent Chairman, Abdullazeez Abdulsalam returning unopposed for his second term in office.

The election which follow the ANLCA procedures and guidelines returned the incumbent Chairman as the sole candidate with eight votes, which was also the number of licensed owners, that qualifies them as eligible voters.

Presenting his Certificate of return, after the successful election, the ANLCA Vice President, Dr Kayode Farinto urged the Chairman to use his next three years to give the association more Licensed members who can stand for elections to avoid sole candidate in future. He also challenge him to build a befitting Secretariat for the chapter being the gateway to Nigeria as the Federal Capital Territory.

On his part , the National Secretary of ANLCA, Alhaji Abdullazeez Mukaila said the Chapter Chairman should use his second tenure do his very best to repositioned the chapter being the national gateway to Nigeria. He advised them to be compliance in their businesses as the present government is playing by the rules and that he should not go beyond the ANLCA constitution.

Mukaila also urged the members to give the Chairman maximum support, while challenging them to be digital as the e- Customs process will change the face of doing business from manual to digital, promising that the national body is planning series of training programmes for all members.

In her remarks, the National Financial Secretary, Hajia Bola Muse glamoured for more women inclusion in the chapter and urged the Chairman to make sure more women obtained licenses to be part of the leadership in next election. He pleaded with him to work with the women for a better and balanced association.

The event ended in celebrations as all other stakeholders congratulated the Chairman and promised to work with him for a more successful tenure.