— Promised a new Board in a Month 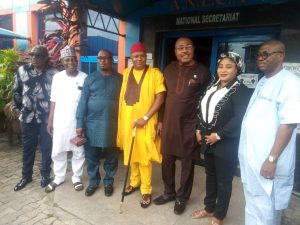 The ANLCA President alongside his Executives yesterday at the Dikko Inde house headquarters of the Association swears -in interim Chairman and six other members of the chapter in Lagos.
They are to serve for 90 days before election will be conducted to usher in the first set of elected officers into the chapter.

It could be recalled that, the Nigeria Customs Service, had created additional Commands, which splits the former Muritala Mohammed Airport Command into two . As such ANLCA being licensed by Customs for duty collection are equally needed in the new Commands to perform their functions.

The inauguration of the airport chapter yesterday marks the third Chapters the Association has inaugurated its Executives in the last two weeks, having done same in Kano and Abuja International Airports through democratic elections.

Speaking to the new Executives, Nwabunike warned them against impostors who will come in the name of board members threatening them. Saying for now, ANLCA has no Board of Trustees and promised to formed a new board within a month. He informed them that, the tenure of the last board which is six years has since expired and that anybody parading himself as a board member now, may be heading to jail.

Armed with the ANLCA supreme constitution, he referred the the new chapter Executives to various sections of the Constitution and the powers of both the President and the NECOM. Of particular reference, Nwabunike referred them to Section 30 (1) Emergency Powers of the President which states “The Executive President shall in the exercise of his emergency power have the power to suspend a Chapter Executive that fails to fulfil their obligations to the National headquarters and appoint immediately a caretaker from amongst the other members of the chapter as an administrator and report same at the next NEC.”

Under other Emergency Powers, the ANLCA constitution states ” Where any issue or matter arises which is not covered or contemplated in this constitution , the BOT and or NECOM shall have power to take decision for immediate resolution of the issue or matter in the best interest of the Association and report same to next NEC meeting.”

Talking tough, the ANLCA President says, he has long been working for peace, but people are taking him for a ride and now he will invoked the powers of the Association constitution as the President to tame any member who want to bring him and the Association down.

” Please know your right, if anyone comes to you to threatened you with Police or any security agency, is not your fight, just inform me or any member of the National Executive. Is not your fight, is our fight. So don’t be intimidated, follow the Association’s constitution. People will come with different stories, don’t mind them, just know your right”.

Also speaking, the National Vice President, Dr Farinto Collins inform them that the ANLCA train is moving in a supersonic way and anyone that miss it now , will be left behind and there is no force stopping them. He caution them that the NECOM will not spear any Chapter Executive who circumvent the leadership instructions or the ANLCA constitution.

The National Secretary, Alhaji Abdulazeez Mukaila and the Financial Secretary , Hajia Bola Muse spoke in their various capacities on matters concerning their offices and the Association in general.