OUR GREATEST PROBLEM IS THE BAD ROAD- FANO TERMINAL MANAGER 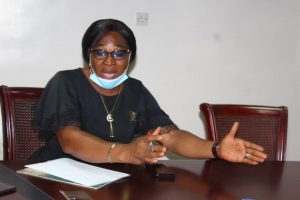 The Terminal Manager of Fano Bonded Terminal, Orieh Princess Theresa has cried out to the Federal Government to speed up the repairs of the ports access roads as the gridlock caused by the deplorable state of the roads is hindering business activities to and from the Lagos ports. Causing extortions, touting and criminality in the ports environment. 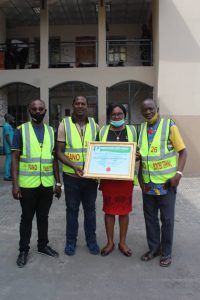 Orieh with her staff displaying the Honour

Speaking with some journalists, Orieh said it takes 15 to 30 days before a container can enter the Apapa port from their terminal. Fano Bonded Terminal is located at the Sanya Bus stop along Oshodi- Apapa Expressway in Lagos State. She also decried the high rate of extortion by security agencies along the port roads from Mile two up to the Apapa port as alarming.

Giving an overview of the terminal activities, she said for now, the Fano Bonded Terminal is being used as holding bay by Maersk Line for their empty containers.

The Mask to connect to Apapa Customs

The Fano Bonded Terminal manager also said that since the commencement of their activities, a minimum of 100 containers are moved from the facility on a daily basis, while the same quantity enters into the terminal daily.

On why their terminal is dealing only on empties and not imported cargoes, she explained ” As you know, Fano Bonded Terminal was under the Tin Can Island Port, but because we enter into a contract with Maersk line as a holding bay for their empties. And as you know Maersk operates majorly at the Apapa port, so we have now been moved to be under the Apapa port. We are putting up infrastructure to commence receiving imported cargoes very soon.”

The Fano terminal manager, who took us with her team round the facility, shows us installed mask to connect to the Apapa Customs Command and storage facilities that will accommodate the imported cargoes, when they start receiving them from Apapa port.

The climax of the event was the presentation of Special appreciation plaque to HRM (AMB) Eze Damian Obianigwe ( KSM), chairman of Fano Bonded Terminal by the Nigerian Economic Growth Movement as one of the 60 Invaluable /Great Personalities at Nigeria’s 60th Independence anniversary.