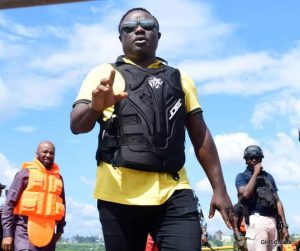 The dream of actualizing the Bakassi Deep Seaport project is gradually becoming a reality with the announcement of its takeover by maritime giant, Antwerp Ports International of Belgium.

Breaking the news of the takeover during a boat ride to the site of the deep seaport with the representatives and port Director, of Antwerp Ports International, Mr. Stefan Cassimon, Governor Ben Ayade of Cross River State said the essence of the visit was to do a recconaissance as well as a required survey of the location, suitability and adaptability of the port. 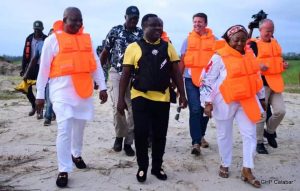 He said the tour will strengthen commitment to the partnership with the Port of Antwerp International and the Cross River State Government to either take the investment from public placement strategy or direct investment by investors.

The governor expressed delight that such a well celebrated name in the maritime Industry has decided to get involved with the Bakassi Deep Seaport project. The deep seaport is one of the on- going legacy projects of governor Ben Ayade of Cross River state.

Ayade had earlier received the Belgian Ambassador, Daniel Betrand, who led the team on a courtesy call on him at the Executive Council Chamber, Calabar.

Speaking shortly after visiting the project site, Ayade said: “We are here on the Calabar River emptying into the Bakassi Deep Seaport with a team of technical directors and experts from the Port of Antwerp International.”

Lauding Antwerp Port International’s interest in the Bakassi deep seaport, Ayade said “Nigeria will have a lot to benefit from this port as this will be the first cargo industrial port as approved by the Federal Ministry of Transportation.”

He reiterated the imperativeness of the Bakassi Deep seaport which is to create a short cut between the mouth of the Atlantic ocean and northern Nigeria with the view to exporting solid minerals that abound in that part of the country.

“The future is Africa and that future starts today, that is why Cross River is smart enough to digitally partner with the Port of Antwerp international for the development of the Bakassi Deep Seaport to take Atlantic Ocean closer to northern Nigeria to allow for the full exploitation of the iron ore deposits and all the solid mineral deposits for the wealth and prosperity of Nigeria,” he said.

In his remarks, Ambassador Bertrand said the team was in Calabar to “to discuss further on the wonderful project in Bakassi and to ensure that the project, that is the Deep Sea port, will be a success as soon as possible.”

The Belgium Ambassador disclosed that “Cross River is of interest to Belgium because you are close to the sea where you have so many potentials and endowed with very industrious population. So, I think that a lot is possible here for you and for us.”

He assured of his country’s firm commitment to the project saying: “We are also here to ensure that Belgium contributes actively in this wonderful project.”