Akwa State Governor Udom Emmanuel has formally received the official gazette from the Federal Government signalling the approval for the 50,000 hectares Liberty Oil and Gas Free Zone in the state. 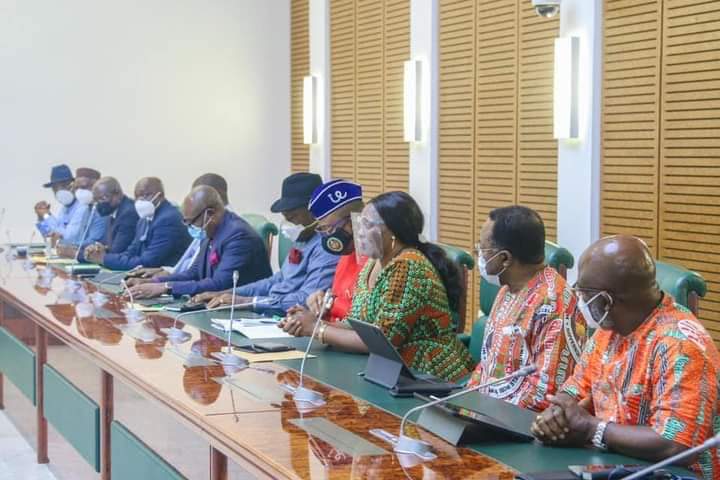 The Gazette of the approval was presented to the Governor by a delegation from the Oil and Gas Free Zones Authority (OGFZA), led by its Managing Director, Mr. Umana Okon Umana, Friday at the Executive Chambers, Government House, Uyo.

The Governor said the Free Trade Zone, which covers six Local Government Areas including Ikot Abasi, Oruk Anam, Onna, Eastern Obolo, Mkpat Enin and Ibeno, is proposed to be the largest in Nigeria when completed. Stressing that this will give a boost to the state’s Coconut refinery project and its consequent economic diversification.

The Governor explained that the state-owned Coconut refinery which will be driven by a combination of several technologies to enhance its operations once installed will serve as a major export hub of coconut virgin oil in Africa, adding that the refinery will be multi-faceted and digitized with capacity to process other economic products like Palm kernel.

“Within this Oil and Gas Free Zones we are installing the largest coconut refinery that will do crude extraction of Coconut oil in Africa. That same refinery without changing a pan can process palm kernel oil, so it is going to be a multi-faceted, multi-purpose and digitized refinery”.

He said the delay in the commencement of the Coconut refinery was due to the outbreak of COVID-19 which stalled the movement of expatriates and equipment acquired for the project and assured Akwa Ibom people of its commencement once the dreaded pandemic is abated.

Governor Emmanuel urged the management team of the Oil and Gas Free Zone Authority to take advantage of the 21 Storey office accommodation by moving their office to the State, maintaining that the building has been affirmed the smartest building in the Country.

He said the State Government has had elaborate consultations and sensitization of relevant communities through the traditional and other grassroots institutions and gave assurances on the acceptability of the project and cooperation of locals to enhance security.

Governor Udom Emmanuel, however thanked President Muhammadu Buhari for the timely approval for the establishment of the Liberty Oil and Gas Free Zone in the State.

The Managing Director/CEO of OGFZA, Mr. Umanah Okon Umanah, in an earlier remark on behalf of the delegation from the Oil and Gas Free Zones Authority, described their visit to the State as historic and lauded the Governor’s effort in working with the Federal Government to promote the establishment of the Liberty Oil and Gas Free Zone in Akwa Ibom State.

Mr Umana explained that the Governor deserves commendation and congratulated him for earning the President’s approval through his deliberate efforts.

Mr. Umana commended Governor Emmanuel for working hard to ensure the peace in the State which, he added, has created an attractive business environment for Foreign Direct Investments in the Downstream and Upstream sectors of the Oil and Gas industry.

He assured that the project was already up and running as his agency was already with the various multinationals for the takeoff of the construction phase.