Customs Must see Freight Agents as Partners, not Rivals – Uzordima 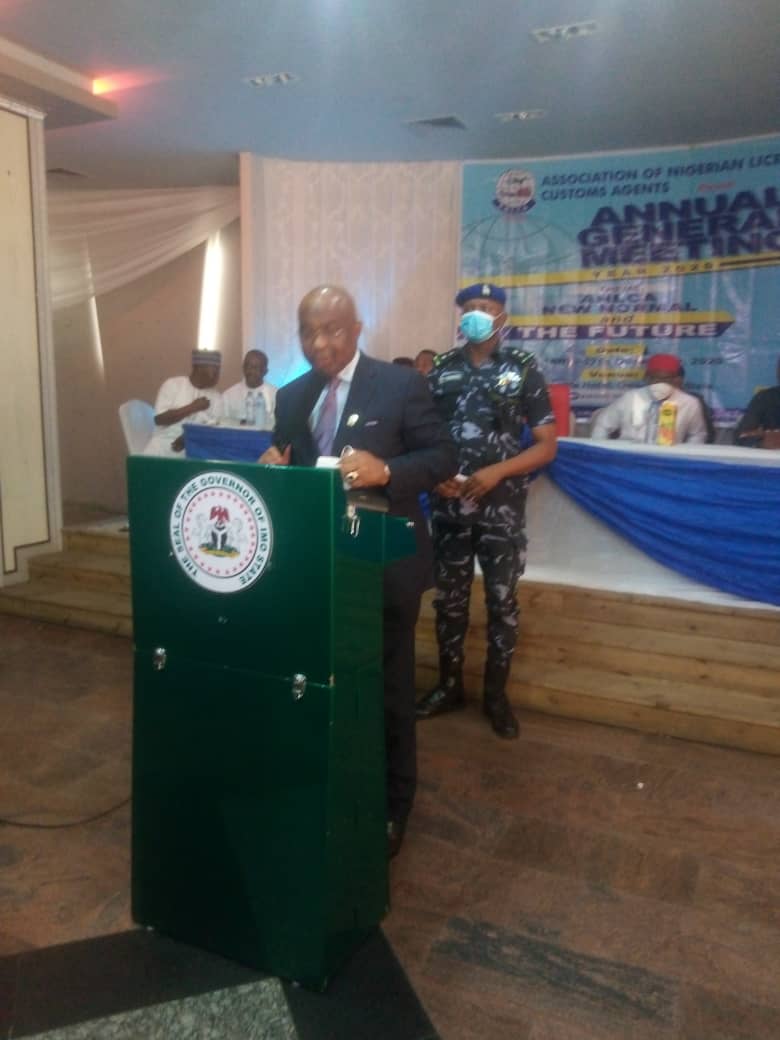 In a bid to dissipate the numerous challenges associated with cargo evacuation from ports and border posts, the Governor of Imo State, Senator Hope Uzordima has called for a robust synergy between Freight Forwarders and the Nigeria Customs Service (NCS).

According to the Governor, this partnership would also foster the nation’s bid to diversify the economy and boost non-oil revenue with numerous potentials from the maritime sector.

Uzodinma who was speaking as a Special Guest of Honour during the Annual General Meeting (AGM) of the Association of Nigeria Licensed Customs Agents (ANLCA) on Wednesday in Owerri, the Imo State capital , also urge the federal government to expunge unrealistic fiscal policies.

His words, “Cotonou port is very busy because of some unrealistic fiscal policies in Nigeria. What is the essence of placing the import duty of cars at 35% or more, when the country doesn’t produce cars? Isn’t it only reasonable for the government in Benin, Togo and other neighboring countries to peg their import duties at 5% to target Nigerian cargoes?”

Noting that the job of a licensed Customs agent is also linked to national security, “If all security policies and programmes are sabotaged by you, it will not work. So, in the spirit of patriotism and national interest, I will urge you to close ranks with all agencies of government in the security sector and the business sector so that we will be able to protect our interest as a nation and unite Nigeria further.”

The Governor of Imo State , Senator Hope Uzordima was also decorated as the Grand Patron of ANLCA, while, Chief Henry Njoku and another ANLCA chieftain were made patron of ANLCA respectively.

However, in a bid to ensure efficient contributions of elected officials in the association’s activities, the group’s constitution was reviewed to allow only single tenures for all elected leaders.
Mr. Peter Ojo had moved a motion which was later adopted by more than two-third of the ANLCA members participating in the AGM.

Similarly, the duration of the tenures for Chapter Executives were move from three years to four years. That of National Executives from four years to five years and six years for Board of Trustee (BOT) members, all single tenures.

Two-thirds of the participants in the AGM also agreed that the five years single tenure of the National Executives takes effect with the current administration and subsequent elections for BOT and Chapter executives.

Giving his opening remarks at the event, the ANLCA President, Hon. Tony Iju Nwabunike said ANLCA will continue to pursue the interest of members in the areas of operational challenges, and other government policies that are not favourable to the interest of the maritime industry at large.