Home » News » From a Street Hawker to Billionaire: The Story of Cosmas Maduka

From a Street Hawker to Billionaire: The Story of Cosmas Maduka 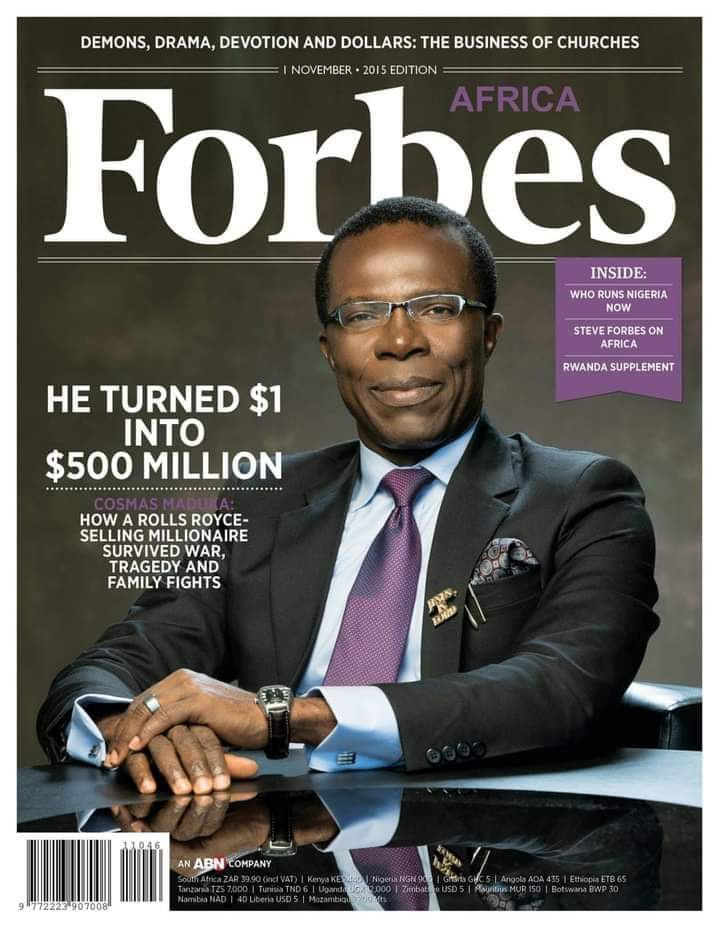 This is the story of Cosmas Maduka; the man who grew a $500 Million Business Empire from 200 Naira he was settled with to punish him.

Cosmas Maduka, CON is a is a well-known Nigerian Businessman and Philanthropist, the Founder, President and Chairman of the Coscharis Group, an indigenous conglomerate with diverse interest in Manufacturing, ICT, Petrochemical, Auto Care and Auto Components, Automobile Sales and Services, Agric and Agro-Allied Business Sectors.

This is a man that rose from a humble beginning to become a billionaire and one of the richest men in Nigeria. His story is a classic illustration that anyone can make it in Nigeria, no matter your background and despite the economic situation of the country.

Cosmas Maduka was born on December 24, 1958, in Jos, the capital of Plateau State, Nigeria. Four years after his birth, tragedy struck with the death of his father — Peter Maduka. Due to the poor and pitiable status of his family, he was faced with no other choice than to start providing the very basic needs of life for himself.

At 7, he withdrew from school at elementary three and joined his mother to hawk Akara in the streets of Jos.
In 1968, his uncle who was residing in the Ebute Metta area of Lagos took charge of his well being and began training him as an Automobile Apprentice in their Auto Shop located at No. 88 Griffith Street, relatively close to Oyingbo Bus Stop. Since his uncle had no place of his own to stay, he’d usually sleep at his friend’s place while Cosmas would sleep at the workshop after the close of work.

Through hard work, dedication, and honesty, young Cosmas won his uncle’s absolute trust. This made his uncle give him bigger and sensitive responsibilities he wouldn’t naturally have given anyone.
This included letting him travel alone from Lagos to Nnewi to buy goods on his uncle’s behalf. When he was 14, he was sent to work at one of their branches in Sokoto and eventually Nnewi.

One day in 1975, Cosmas absented himself from work without his uncle’s permission to attend a Christian Camping Program. This singular act caused the relationship with his uncle to fall apart and out of anger, his uncle immediately terminated his apprenticeship and settled him with the sum of 200 Naira and asked him to go and concentrate on his church programs.
He was given that amount to punishing

With 200 Naira, he partnered with his brother to start an automobile spare parts business called Maduka Brothers. However, the business eventually crashed, and they parted ways due to their ideological differences.
He got 100 Naira after splitting the business which was added to the money he got as a settlement from his uncle, which brought his capital to a total of 300 Naira.

In 1977, he started a new business as the sole proprietor with the 300 Naira he had. He ventured into buying and selling motorcycle spare parts from Boulos Enterprises Limited. The major product that was turning in a lot of profit for him was Boulos’ New Innovation, Motorcycle Crash Ban. He would buy several of them and remove the address of Boulos Enterprises from the carton so that people wouldn’t know where he was buying them from. Within a short period of one week, his capital rose from 300 Naira to 3,000 Naira. With that kind of money in his pocket, he decided he was old enough to marry.

In 1979, he got married to Charity, at the age of 21. A short while after his marriage, he started importation but a great misfortune struck him when he received the wrong shipment. This loss led him into a lot of debts, and because he was owing his landlord several months of rent, his landlord locked up his shop.

With nothing in hand, started all over again. He took a weighing scale he received as a wedding gift to the market and charged 10 kobo from anyone who measured their weight. This daily routine moved his wife in deep tears because of what her husband was going through, hen she remembers how comfortable they were.

After saving up a little capital, Cosmas Maduka teamed up with a friend called Dave to start a new business called CosDave. Not long after their new business partnership, they fell apart due to disagreements on decisions made. This new breakup prompted him to start another business called Coscharis.
The name Coscharis was formed by the combination of two different names; his name, Cosmas, and his wife’s name, Charity.

In 1982, Cosmas Maduka finally got his big breakthrough when the Federal Government of Nigeria granted 10 motor companies licence to import vehicles, and his company, Coscharis Motors was selected.

Ever since, his company has continued to grow astronomically, with several branches around Nigeria. He pursued several deals with top European Car Manufacturers that positioned him as a major dealer in several car brands.

Coscharis Farm:
In a way to improve the agricultural state of the country, Coscharis farm was established. It is located in Anambra and it produces hygienically processed rice grains for mass-market supply and consumption.

Coscharis Medical and Food Limited:
This arm was established in 1997 and it provides professional healthcare services such as medical consultancy, diagnostic solutions, e.t.c. It also provides training for medical personnel within and outside the country.

Coscharis Beverages:
It was incorporated in 2002 to deliver clean safe water and non-alcoholic beverages for consumption. It aims to provide a satisfactory service to her customers while employing the highest health and safety standards.

Coscharis Motors Assembly Limited:
It was established in 2014 as a subsidiary of Coscharis Motors. It began the assembling of Ford Rangers (pickup truck) with its first units rolled out in 2015. This development, however, made Nigeria one of the largest manufacturing plants in Africa second only to South Africa for Ford Assembly.

Coscharis Mobility:
It was incorporated in 2013 as a vessel for providing a solution to consumer specific needs. It also does car rentals (short and long term), leasing, logistics, haulage services, drivers & staff outsourcing, e.t.c. It is the sole franchise operator of SIXT Rent A Car in Nigeria.

Today, Cosmas Maduka is currently serving on the Board of many companies notable among them are CG-EKO LLP, First System Refinishes Limited, CG Biostadt Limited, Sixt Rentals, Nigeria.
He served as a Director in Access Bank Plc., one of the leading banks in Nigeria for 12 years from 2000 – 2012.

He also served as the president/Chairman of the Nigerian Table Tennis Federation for 16 years. During his tenure, Nigeria led Africa in all the events. He led the Nigerian Team to the Olympic Games; Atlanta ‘96, Athens 2000, Sidney 2004 and Beijing 2008.

His net worth according to Forbes Africa 2015, sits at over USD500 Million.
His current net worth is estimated at $800 million. This makes him one of the richest men, not just in Nigeria, but in Africa as well.

Dr Cosmas Maduka is an Entrepreneur of Excellence. He is a motivational speaker and plays a mentoring role for upcoming entrepreneurs.

In September 2012, Dr Goodluck Ebele Jonathan, President of the Federal Republic of Nigeria conferred him with the National Honours of the Commander of the Order of the Niger (CON).
The story of Cosmas Maduka should be an inspiration to every youth in Nigeria.
It teaches us that hard work, resilience and taking advantage of opportunities at the right time is the key to success for any troubled entrepreneur anywhere in the world.

Never give up on your dreams no matter how many times you fail.
It is reported that Thomas Edison failed about 1.000 times before he invented the electric bulb. When asked to explain what kept him going after failing so many times, he replied that he never failed 1,000 times, but only discovered 1,000 ways an electric bulb will not work.

So failure can be seen as a lesson on how something will not work.
Resilience and determination will always win the day. Don’t waste your time crying over the economy of the nation, or over your family background, there is nothing you can do about it, but there is a lot you can do about your own economy today.

Improve yourself and your personal economy will improve. At least, start by improving yourself. A great future doesn’t require a great past. You can make a difference. A journey of a thousand miles starts with a step.
Be Inspired, Collected and Polished