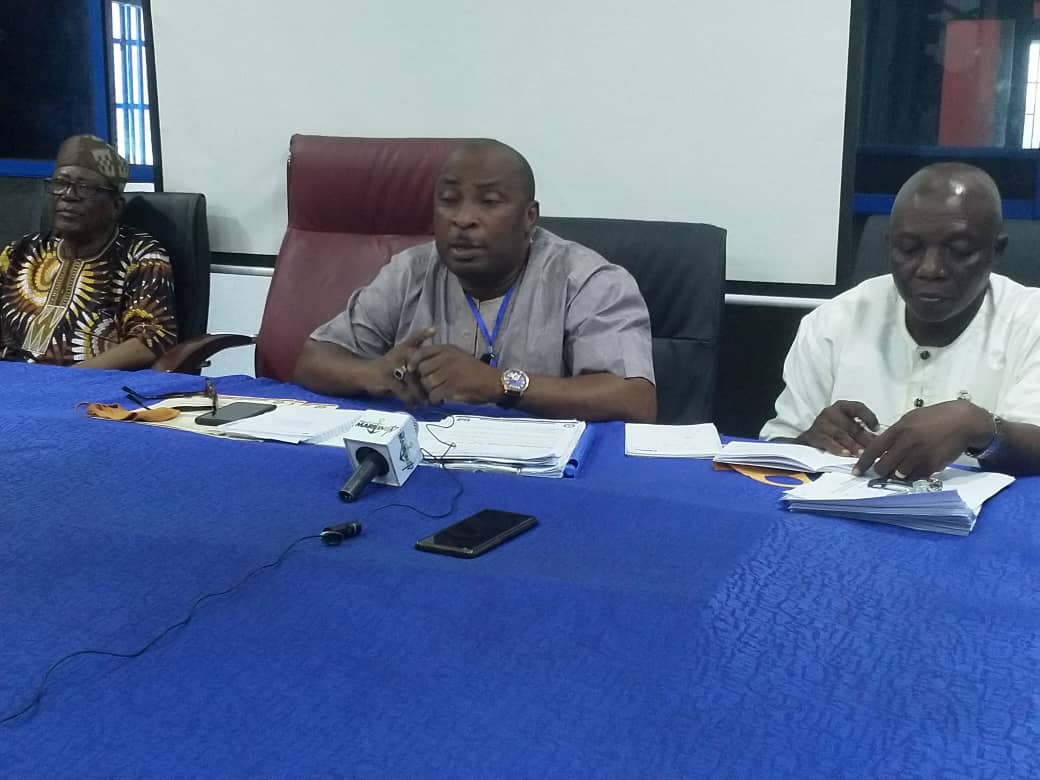 The Association of Nigeria Licensed Customs Agents (ANLCA) has described the latest purported Kano Federal High Court Interim Injunction alleged to have been granted the aggrieved members of the association as only existing in the social media, saying neither the association have been served ,nor notify of such injunction.

Addressing the media on Wednesday, the Vice President of ANLCA, Dr Kayode Farinto said ordinarily the association wouldn’t have responded to such issues, but to put the records straight and to also educate the public, not to be misled by the aggrieved members of the association, who have been brandishing several interim Injunctions and misinterpreted it to be a court judgment.

Kayode said ” Ordinarily we didn’t want to respond to this Kano Federal High Court interim Injunction flying over the place on the social media. To put it on record, the so-called injunction has not been served to us and if you look at the date it is already time- barred.” Am told an interim Injunction can only last for seven days and if you look at the date on the paper it was 26th March it was issued and today is 14th April. Besides that, neither our association chapter office in Aminu Kano International Airport nor our national headquarters here have received such court injunction, so that is why we referred to it as ” Social media injunction “.

Speaking further, Farinto said their investigation on the latest injunction which is the number 10 in the series of frivolous court abuses the Taiwo Mustapha aggrieved members have been parading shows that, one Alhaji Mohammed Sani Utai who applied with a 24 paragraph affidavit for the interim Injunction in Kano, is neither a member of ANLCA, nor own any company licensed by Customs as ANLCA member.

Making further clarifications on the matter, the National Secretary of ANLCA, Alhaji Babatunde Abdulazeez Mukaila said ” You see, I have gone through our register, we have a complete register of all our members across the country and don’t forget , ANLCA members is not known by the individual, but by their companies, because Customs only licensed companies and not individuals. Have not seen any company belonging to that name, even at that there is nobody like Alhaji Mohammed Sani Utai in our register. Who knows this maybe another of our aggrieved members antics of going about different courts in Nigeria collecting Interim Injunctions to misled the public, so shameful and ridiculous “.

News of the Kano Federal High Court interim injunction restraining 25 members of ANLCA, including their companies from parading themselves as ANLCA board of trustees members broke out yesterday in the media. The Kano Court injunction has 11 names and companies among them Alhaji Taiwo Mustapha, Prince Taiye Oyeniye, Chief Ernest Elochukwu and others as plaintiff / applicants .

While, the 25 names comprising of individuals and companies on the Defendants/respondents includes Mr Tony Iju Nwabunike, Mr Kayode Farinto, Mukaila Babatunde, Dr Taiwo Afolabi among others.

The Applicants have prayed the Honourable Justice A.Lewis- Allagoa court in Kano Judicial Division through an interim Injunction among other things to restraint the Defendants from parading themselves or signing any document as Trustees of ANLCA pending the hearing and final determination of the motion on notice. The matter according to the paper has been adjourned to 21st April, 2021 for hearing.

The ANLCA National Secretary however stated that journalists should know that an interim Injunction is not a court judgment, he informed that there is a court judgment delivered by Justice R.M.Aikawa with suit No. FHC/L/CS/1274/2018 banning Alhaji Taiwo Mustapha from parading himself as Board member of ANLCA not to talk of Chairman of board and up till now he has not appealed that judgment. But rather they kept deceiving the public by distorting the facts in the 13 paragraph Justice R.M.Aikawa ruling in that case.

Meanwhile, ANLCA has welded the big hammer of suspension on Alhaji Taiwo Mustapha, Taiye Oyeniyi, Aduma Joe Sanni, Chief Dennis Okafor and Mr Temitope Akindele for anti- association activities, causing pains to members of the association and bringing the name of the association to disputes.

The Vice President of ANLCA, Dr Kayode Farinto who is constitutionally empowers as the Chairman of the association’s National Disciplinary Committee while briefing journalists said the five suspended ANLCA members were duly written to explain and appear before the committee to response to allegations against them of anti- association activities. But they neither reply or appear at the committee sittings to defend themselves.

” Let’s put it on record that the suspended persons were written letters to explain why disciplinary actions should not be taken against them. They were also invited to appear before the committee, but they never did. As such we make our findings and recommended for their suspension, which the NECOM approved. Hence they are suspended.
Let’s state it very clear here that nobody is bigger than the association” Farinto warned.