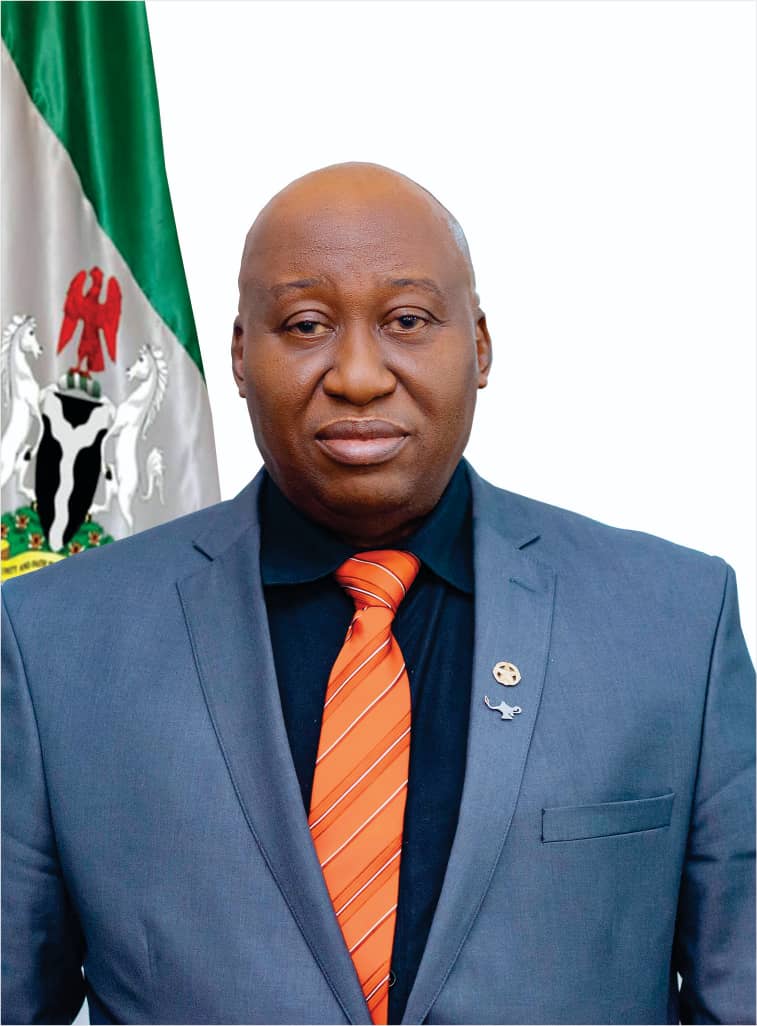 Contrary to the alleged corruption leveled against some staff of the Maritime Academy of Nigeria, Oron by the Rector, Comdr. Emmanuel Duja Effedua, one of the victims who incidentally blew up, the various financial infractions ongoing at the Bursary department of the institution has contacted our Correspondent to narrate his own side of the story and according to him, the many lies and intimidation tactics the Rector has deployed to tarnish his image. 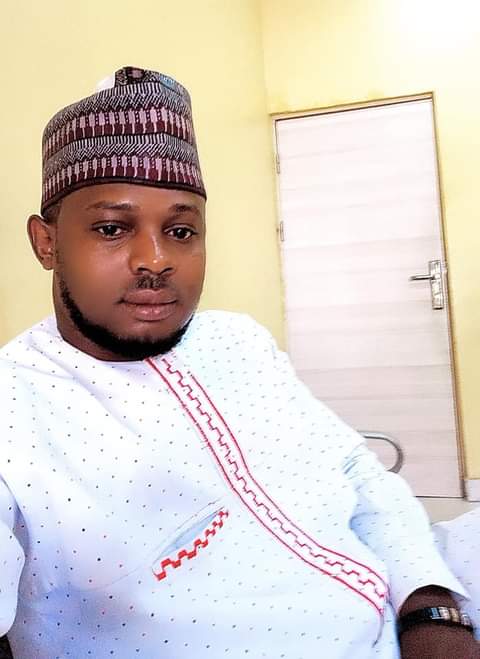 Adamu Jibrin, sacked staff who exposed the fraud in the Academy

Mr Adamu Jibrin said, though he has involved his lawyer and civil society who are handling the matter, but he needed to react to the recent press briefing carried out by the rector two weeks ago, where he told the whole world that he Adamu Jibrin begged him and that he is on the run. 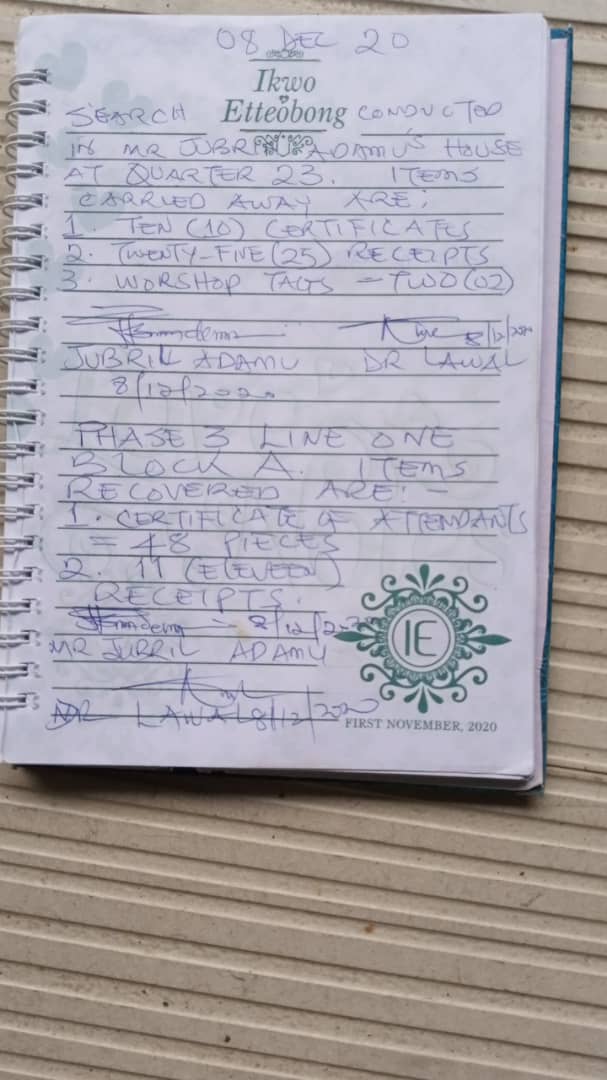 List of the items packed from Adamu Jibrin apartment, including the 54 fake workshops and training certificates during raid at his lodge.

The Kogi state born Jibrin further reveals that he was given 54 fake certificates within a year to justify that he attended trainings and workshops of which he never attended anyone. He also alleged that the Coordinators of this fraudulent activities in the Academy are five in number drawn from the Bursary and Audit departments. While over 20 staff accounts are used for these nefarious activities, with the Audit and Bursary staff as majority.
“The Rector lied and this is the true story of my ordeal at the Academy. 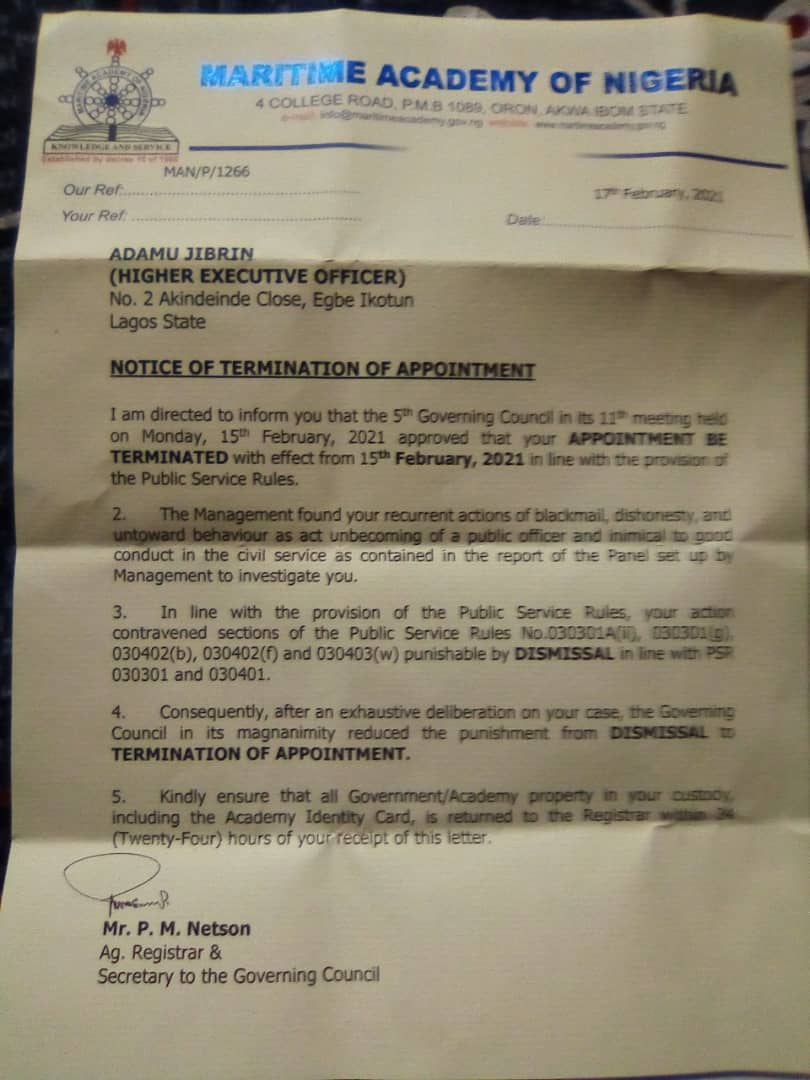 “My name is Adamu Jibrin, I joined Maritime academy on 27th October, 2013. I joined the Academy with my Higher National Diploma (HND) from Nassarawa State Polytechnic. Through out my service in the academy I was with Audit department. I have an impeccable record devoid of queries. Around September 2018, few of us where selected from Audit and Bursary department, by the Cashier of the academy Mr. Onoyom Ettebong, where they used our account to siphoned government money through three deceptive methods like, Training and Workshops, Duty Tour Allowance ( DTA) and acommodations for officeers from Ministries, Accountant General office and National Assembly members. 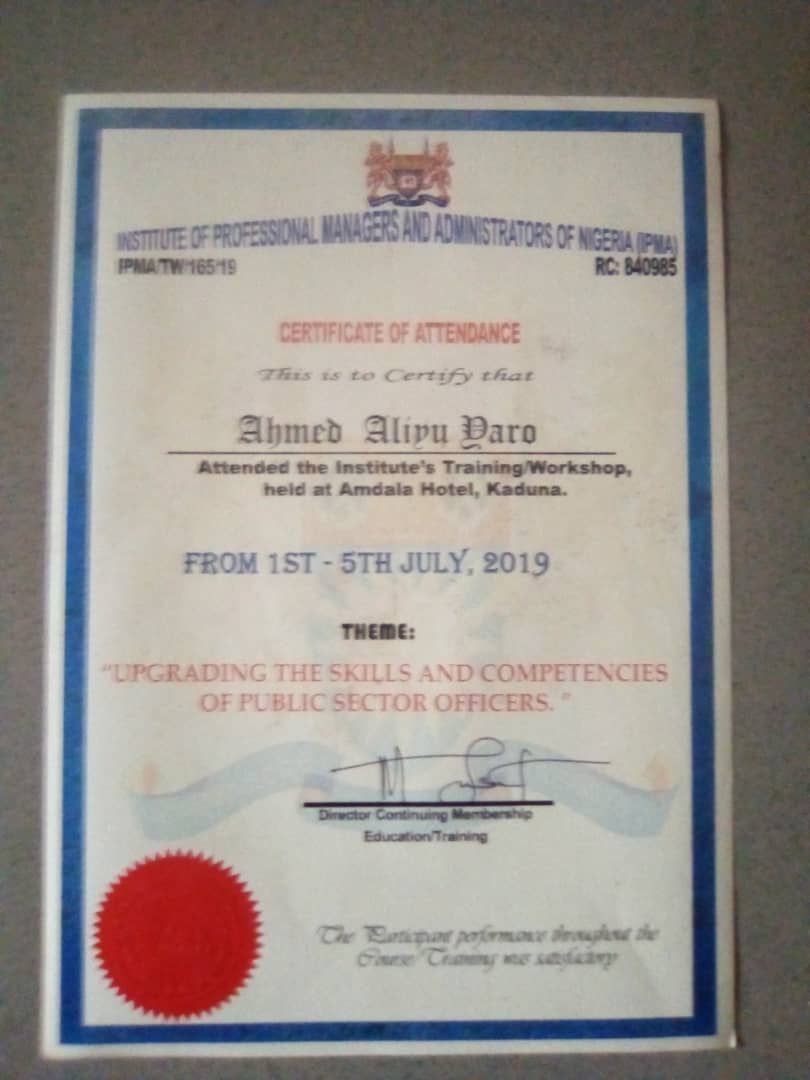 ” The method of this fraudulent stealing of government funds is that , a certain amount of money will be paid into your account, then you will be made to withdraw immediately from your account and give it to some designated boys at the Bursary department who are the coordinators. When you withdraw this money, if it’s for training/workshop and DTA, the beneficiary will be given N20,000 and if it’s for accommodation for government officials the beneficiary will be given N80,000 and a fake certificate of attendance will be given to you as if you attended the training and workshops. 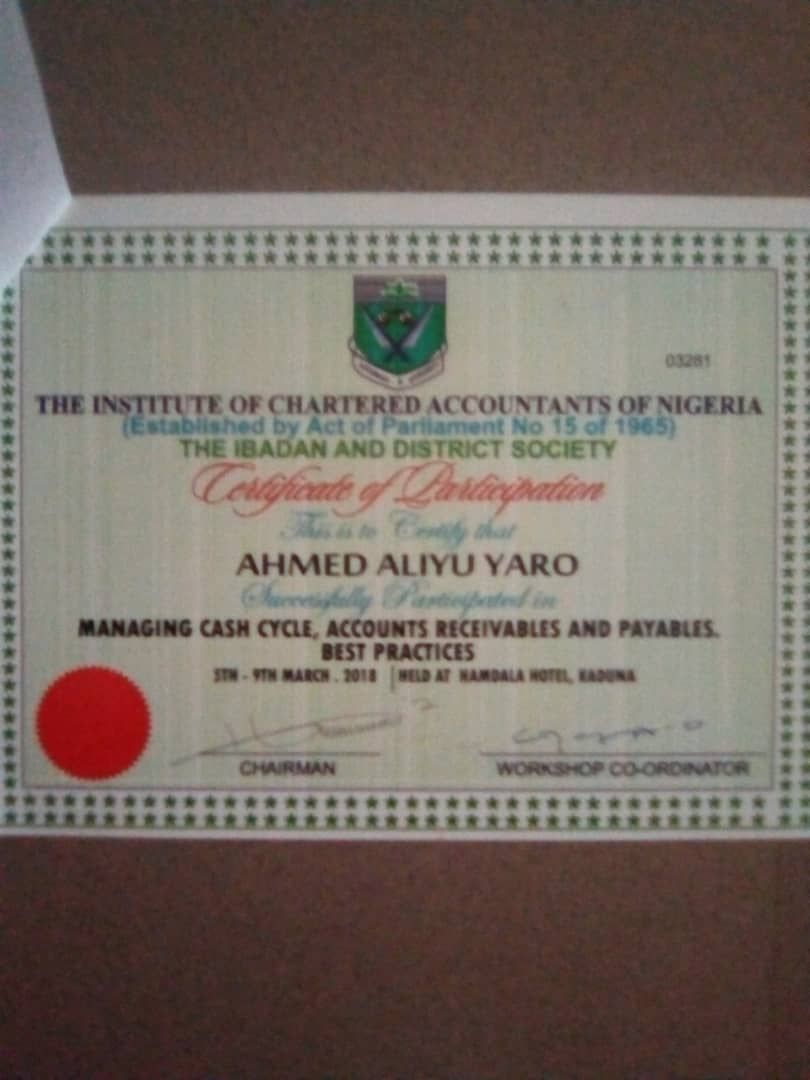 Some of the 54 fake certificate

“They use my own UBA account from October 2018 to January 2020 where about N62 millions was fraudulently siphoned. Using my account to that tune, around September 2020, I approached the cashier, that my mum was not feeling fine, she need an eye surgery, that he should please assist me, I needed help financially to enable me take her to the hospital for medical attention. The cashier told me that he’s not in the position to do that, he told me if I can meet others who coordinate the fraudulent scheme with him or I should meet the Bursar myself. I now told him that why is he doing that, I told him instantly that why should my account be used to siphoned to the tune of N62 million naira and am in need of help and no body is ready to assist me. Because of that he reported me and twisted what I said to suit his purpose. That I want to expose them. When he reported me to Bursar, then bursar took the matter to the Rector.

“The following day I was summoned by the Rector one- on -one in his office, where he asked me to tell him what transpired between me and the cashier.
I narrated my own side of the story to Rector in his office, then rector now calm me down that there’s no issues, but we are trying to create it, that I should not worry or create further problems, that he will direct the bursar to assist me. Before leaving the rector’s office he told me to collect his number from his P.A that if there is anything, I should let him know. That I should not do trouble with anybody. In my present in his office he call an ICPC official who happens to be his friend.

” After meeting rector in his office, a week after, I received a call from bursar to come down to his office, when I went there, I greeted him and we exchange pleasantries, he gave me N200,000 in a brown envelope, he said rector directed him to give this money that I should go and take care of my mother. Instantly I now pleaded with him that the money is not enough for me, if he can still assist me that I need like 670,000, the bursar asked me to go that he will get back to me.

” A month and half after I didn’t hear from the bursar, if I text him, he wouldn’t respond, I now send a message to the rector through text message, that up till now they haven’t assisted me. I told rector in my text messages that why should they used my account to cornered up to the tune of N62 millions and I’m in need, no one is ready to assist me, is this fair?. When the rector got the message that’s on the 23rd of November, 2020, in the morning, he flared up and angrily, he call me back on phone instantly and started threatening me on phone, that why am I involving him in the scam, that the issue is between me and the bursar, that if care is not taken, he will deal with me and I will run away from this academy. That if I want him to go down, he will make sure with his position I will first go down, that’s what he said on phone.

“After like four hours, I got a phone call, he came to office and asked his P.A (Ibrahim) to call me to his office, I was summoned to his office. In the presence of the Registrar, Acting bursar and the cashier all in his office at around 11 o’clock on the 23rd November 2020, he told them that he is going to deal with me. He directed the Registrar to give me a query for involving him in the money laundering scam. Immediately they send me out of the Rector’s office. The following day, I was called by the registrar to his office and he handed me a query letter to answer within 24 hour. I replied the query and brought it back to registrar office the following day. When the registrar read through and see what is contained in the query, he asked me, that he don’t want me to further have problems with the rector, ” You are from the north and I’m from the north, am advising you to change the narrative to avoid further problems” that I should go back rewrite the query, he directed me to hail the rector how he’s doing infrastructural development in academy from there , they will know I have shown remorse and the issues will die down, he assured me. I went back rewrite the query as directed by the registrar. ( This was the reply to the query the registrar read at the press briefing held in Lagos by the rector two weeks ago in Lagos).
Then, I submitted the query to him as directed, he collected it and ask me to go that he will get back to me.

” A week after, the registrar called me again to his office, that the rector has directed him to post me out of Audit department to the Library, that I should get the posting letter from the Head of Audit. When I got the letter, I proceeded to the library immediately after handing over in Audit department. I was in the library till December, 2020. I got a letter from Dr. Lawal through one Emmanuel Shaiyen from the Personnel department, the letter read, that a committee has been set up on to probe me, that am accusing the management of money laundering, that I should come and defend myself before the committee.
That I should tell the committee how N62million got through my account.

” When I appear before the committee, I told them that those that used me know how the money get through my account. Then the committee chairman Dr. Lawal and his members asked me to bring all the fake certificates ( about 52 of them) and receipts given to me in the cause of the fictitious trainings and workshops, that they needed it, I told Dr. lawal that the certificates are for me in case anything happens. On hearing that, Dr. Lawal held my shirt and ceased my two phones from me. That they needed those certificates. Under duress, I was forced, immediately they call four Naval Policemen to come over and took me to my lodge. I was rough handled and put in a coaster bus, with the committee members and the four Naval Police. We went to my first apartment, my bags were search, my room was ransacked, they scattered my clothes on the floor, luckily for them, they saw all those fake certificates, ( 54 of them) the certificates were given to me through their fraudulent activities to look as if i attended trainings and workshops, but i never attended any. The Naval Police carted away all the fake certificates.
After taking the certificates I was asked to go that they will get back to me.

” I was in the library till on the 17th of February, 2021, when the registrar call me to come to his office. On getting there, I was handed a termination of appointments letter that my services is no longer needed in Academy. It was on Friday, then the following week, Monday,the Head of works call me on phone that he was directed to tell me that I should vacate the maritime academy quarters. That’s how I left maritime aacademy, Oron.

” have vowed to seek redress through any means possible to get justice over the unjust termination of my appointment. That’s why I petitioned the rector to EFCC, Attorney General office and Ministry of Transports to wade into the matter. Am not on the run, as alleged in some quarters. Am ready to face the law and tell them all that transpired.
I have an impeccable record in the academy, I haven’t involved myself in any dubious or nefarious activities. This was my 7 years in the academy , I have never had any query in my file. I have evidences to back my claims of the fraudulent and fictitious trainings and workshops in other to steal government money at the academy”.