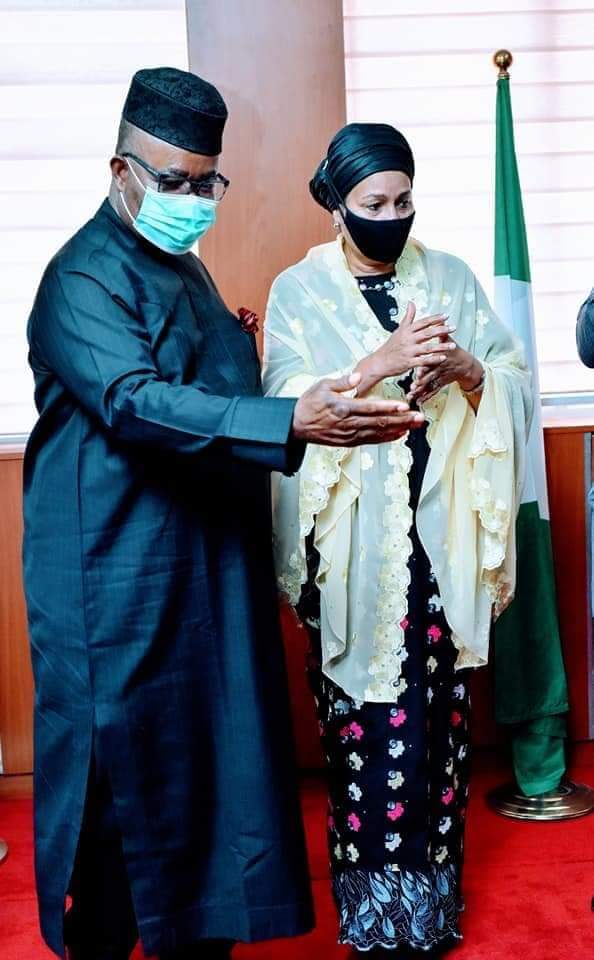 Godswill Akpabio, Minister of the Niger Delta Ministry and Hajia Amina Mohammed, Deputy Secretary of the United Nations during her visit to the Minister.

The Deputy Secretary General of the United Nations, Hajia Amina Mohammed, has commended the efforts of the Minister, Niger Delta Affairs Ministry, Senator Godswill Akpabio, on the continuous peace in the Niger Delta region, saying, “we must continue to invest in peace and not take it for granted,” Mohammed, a former Minister of Environment, before her international engagement stated this, while on a courtesy visit to the Minister in his office in Abuja on Tuesday. 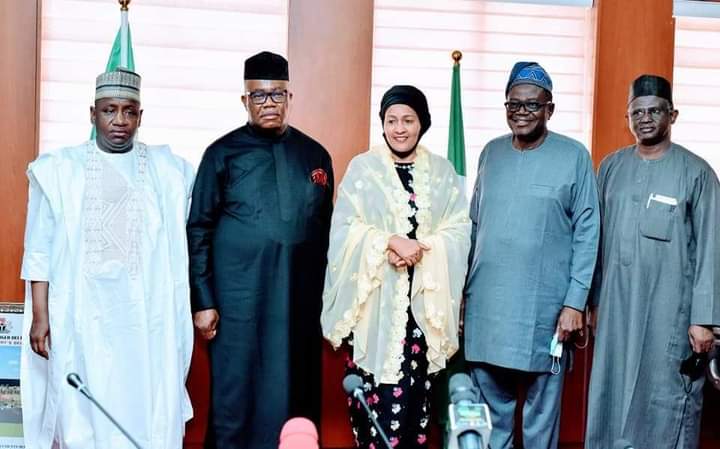 According to her, “the Niger Delta region has a special place in my heart because I was deeply involved in the granting of Amnesty to former militants in the region by former President Umar Yar’adua. I must commend the Minister for the sustained peace in the region.”

Speaking further, the Deputy UN Scribe noted that, “the UN agenda for the nation must also be seen in the Niger Delta, and we would be very happy to collaborate with the Niger Delta Ministry, adding, “the Ministry needs very strong institutions to drive home the goals and objectives that were set by those who established the Niger Delta Development Commission (NDDC).”

Earlier in his welcome speech, Akpabio described the visit of the Deputy UN Scribe as “home coming of someone who did a lot for the region in the area of environment and security, adding “the region that you did so much for, is today the most peaceful in Nigeria, a feat achieved through engagement of strategic stakeholders whenever we noticed any slight sign of discontent.”

The former governor of Akwa Ibom State said, “President Mohammadu Buhari has done so well for the region, through adequate funding of interventionist agencies, because of his committed interest in the development of the region and that was why, when the South South governors met with the president and demanded an audit of the account of NDDC because they believed so much has been released to the agency in the past and nothing on ground to show for it, he immediately acceded to their request by ordering a forensic audit into the finance of the commission.”

Akpabio disclosed further that, “the interim report on the auditing of the NDDC account is very revealing. Over 12,128 projects with no clear-cut ownership, were built and abandoned and they all became sanctuaries for hoodlum and kidnappers.”

“In order to stop this anomaly, we have developed within the ministry, a system called Strategic Implementation Work Plan, where whatever is on ground is captured to avoid duplication of projects, he stressed.”

The president, Akpabio disclosed, “is determined to commission the East West road by next year and have just commissioned the 25year old abandoned headquarters building of the NDDC.”

On calls for secession, Akpabio stated, “Let me inform you here that the South South are not interested in any form of secession. Our stakeholders have said so repeatedly and we stand by that. Let me also call on the UN to assist the Niger Delta people in the area of security, provision of infrastructure and empowerment of our teeming youth”.