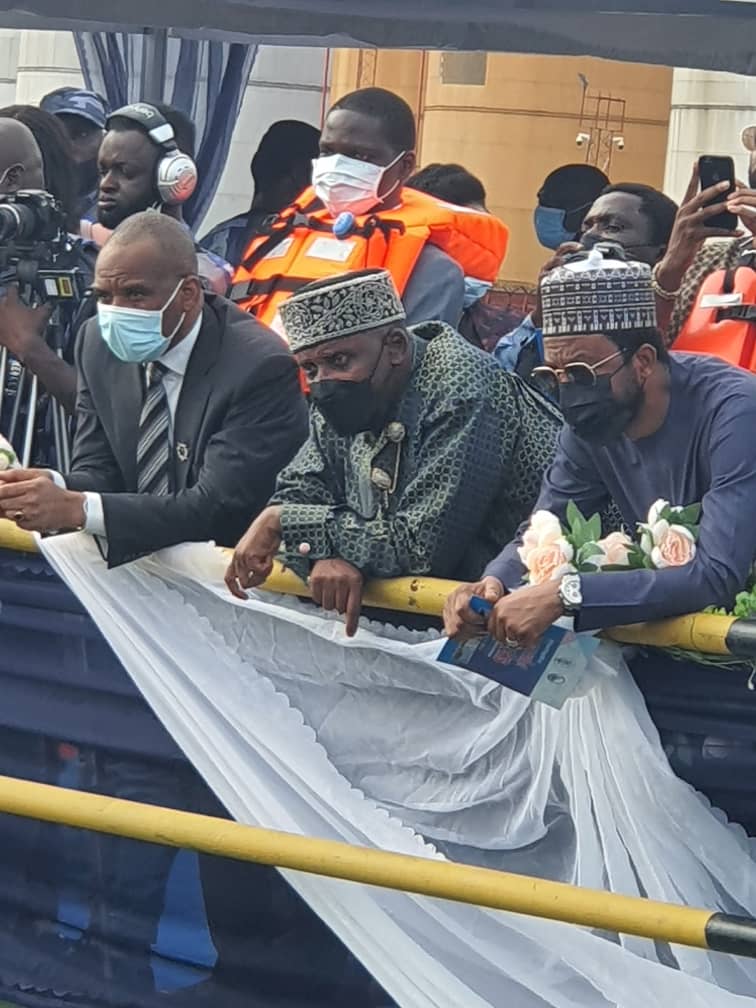 Minister of Transportation, Rt. Hon. Chibuike Amaechi, on Friday flagged off the National Wreck Removal exercise in Lagos, with a declaration that the maritime sector was being opened up for greater investment opportunities with the exercise. Amaechi extolled the Director General of the Nigerian Maritime Administration and Safety Agency (NIMASA), Dr. Bashir Jamoh, for the initiative, saying, “this creative venture of clearing our waters of wrecks and derelicts, apart from guaranteeing better safety of navigation, opens up the prospects of many new investments in the maritime industry.

“This would tremendously help the Federal Government’s economic diversification drive and enhance Nigeria’s standing within the global maritime community.”

The Minister stressed the autonomous status of each of the agencies under the Federal Ministry of Transportation, stating that all the heads of the agencies are appointed on the basis of competence and expertise. He said he would always support imaginative ideas from the Chief Executives.

“It was the NIMASA DG’s idea that we should remove wrecks from our waters,” Amaechi added.

In his own speech, Jamoh said the successful removal of the wrecks and derelicts would restore confidence in Nigerian waters, and eliminate obstacles to smooth, safe, and profitable navigation. He thanked the Minister for pushing the wreck removal idea through the Federal Executive Council (FEC).

Jamoh said the commencement of the wreck removal exercise was another milestone in the incremental achievement of the Triple ‘S’ strategy of the current Management of NIMASA, anchored on Maritime Safety, Maritime Security, and Shipping Development.

Jamoh stated, “these wrecks inhibit the operation of shipping companies, which constantly strive to increase efficiency in order to remain in business. As a result, most of the shipping companies usually avoid operating or investing in areas where navigational hazards are identified due to high insurance premium charges.”

He said with the elimination or reduction of the costs associated with insurance, survey and charting of wrecks, the cost of shipping would drop, to the benefit of mariners and other stakeholders in the maritime industry. Jamoh also discussed other benefits of the wreck removal exercise.

He said, “It is pertinent to state that the benefits that would be derived upon completion of the exercise extend to other areas of maritime core functions, such as search and rescue services, Cabotage monitoring, as well as prevention and mitigation of marine pollution.”

NIMASA is charged with the responsibility of ensuring safety and security at sea as well as regulating the maritime industry in line with international laws and conventions, principally, the International Convention for the Safety of Life at Sea (SOLAS) Convention of the International Maritime Organisation (IMO).

“In line with this mandate and in recognition of the importance of safety of navigation in Maritime Administration, the Agency has established the need for removal of critical wrecks along the Badagry Creek,” the Director General said.

Jamoh had disclosed during a Ministerial Retreat organised by the Federal Ministry of Transportation (FMOT) in August that arrangements had been concluded for the recycling of wrecks and derelicts that would be recovered during the wreck removal exercise. He said this would be done in partnership with the Bayelsa State Government and the Nigerian Railway Corporation (NRC), which already has a Foundry in Lagos for wrecks recycling, with the ultimate aim of creating wealth from waste while providing jobs for Nigerians.The first phase of the wreck removal exercise took place along the Badagry Creek.