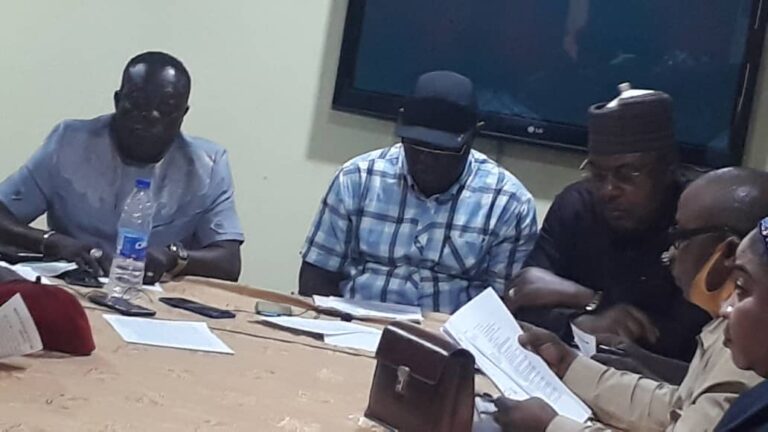 Following a directive of the Permanent Secretary, Federal Ministry of Transportation, Dr. Magdalene Ajani, the five freight forwarding associations accredited by the Council for the Regulation of Freight Forwarding in Nigeria (CRFFN) met in Lagos where they took position on the forthcoming election of the freight forwarders into the Governing Board of CRFFN.
The five accredited Associations has insisted on the 6:6:1:1:1 sharing formular which the have earlier agreed

Speaking after the meeting, the President General, NAFFAC, Prince Adeyinka Bakare revealed that invitation for the meeting was extended to the “so-called independent candidates”, adding that they are surprised that they did not honour the invitation. He , however, argued that despite their absence, the groups would stick to the conclusion from the meeting which was to proceed with the earlier agreed sharing formula for the upcoming elections.

“We believe that no matter what, I challenge any of them to step forward and say that they have never benefited from any association. They should tell us if what made them who they are in the industry is not association. If the association is what made them, I don’t see any independent candidate the way they are putting it.”

While the President and Secretary of the AREFFN were not present at the meeting, the immediate-past President of the association, Dr. Frank Ukor stressed that he was at the meeting in his capacity as the founder of AREFFN.

Speaking to the journalists on the outcome of the meeting part of which held behind closed doors, the Chairman, Board of Trustees, NCMDLCA, Dr. Rafiu Ladipo said; “We considered everything that was on the table and everybody that came for this meeting agreed that we still stand by the 6:6:1:1:1 arrangement.”

Ladipo, however, maintained that the associations are not hindering any individual who wants to contest for the election, “everybody is free to contest the election. We are not equally opposed to the younger ones coming up, but these five leaders must provide leadership that will move the freight forwarding business forward and as such, we still stand by the arrangement 6:6:1:1:1,” he said.

Noting that the forum was given two weeks to report back to the Ministry, he assured that a communiqué from the meeting would be concluded and sent to the Transportation Ministry on Tuesday.

On the decision to cede one slot each to the other three accredited associations, he replied, “The most important thing is the number and what is important here is that we are represented and a voice in the association is being heard. That is what matters most. I am not even looking at associations anymore, the fifteen slots belong to the freight forwarding industry and that is what matters here not where I am coming from.

“In fact, when we get to the Council, we will make it clear that no association is discussed, what is discussed here is freight forwarding business and that is what the forum is all about.”

Meanwhile, addressing the plight of freight forwarders in the Eastern zone that the occupants of the five slots allotted to the zone by the Act establishing the CRFFN must be practitioners resident in the zone, the National President of the ANLCA, Hon. Tony Iju Nwabunike stated that the five associations represented the interest of all freight forwarders including those in the Eastern region.

According to Nwabunike, freight forwarding practitioners are going into the new Governing Council of CRFFN as one body with the single interest of addressing the myraid of challenges affectIng the professionals.

Nwabunike said: “We are talking as freight forwarders consultative forum which is enshrined in the Act of CRFFN. I am standing here as the representative of ANLCA just like any other person here. We are going into this election with fifteen freight forwarders as one body because if you look at it critically, we want them to go and represent the freight forwarders and champion our problems. We have numerous problems at the ports. So, it is not the CRFFN election that is the major issue, we are going beyond that.”

“If for example, the Eastern zone is saying anything, like in ANLCA where I am President, we have zones, we have Eastern zone, we have Western zone and we have Northern zone. So, if such thing comes up, it should be communicated to the Presidency of ANLCA and that is me. It is not acceptable until we discuss it and agree to that totally. I have not heard it, I have not seen it on my table and I don’t think it is true.”

Recall that the inability of the freight forwarders to agree on the modality for the CRFFN Governing Board elections in a meeting with the Permanent Secretary, Ministry of Transport, Dr. Ajani in Lagos two weeks ago, Dr. Ajani urged the freight forwarders to go back and have discussions among themselves on the modality for the conduct of the election and gave them two weeks to get back to the Ministry.