In this maiden interview with journalists, Dr. Paul Adalikwu, the newly elected Secretary General, Maritime Organisation of West and Central Africa (MOWCA) disclosed that the organisation will Improve member countries capacity to maximize their maritime and transport potentials. He also talked about Regional Maritime Development Bank of the organisation that will be inaugurated in Abuja next year. He, however gave a thrust of his administration’s short, medium and long term programmes for the 46 year old body. 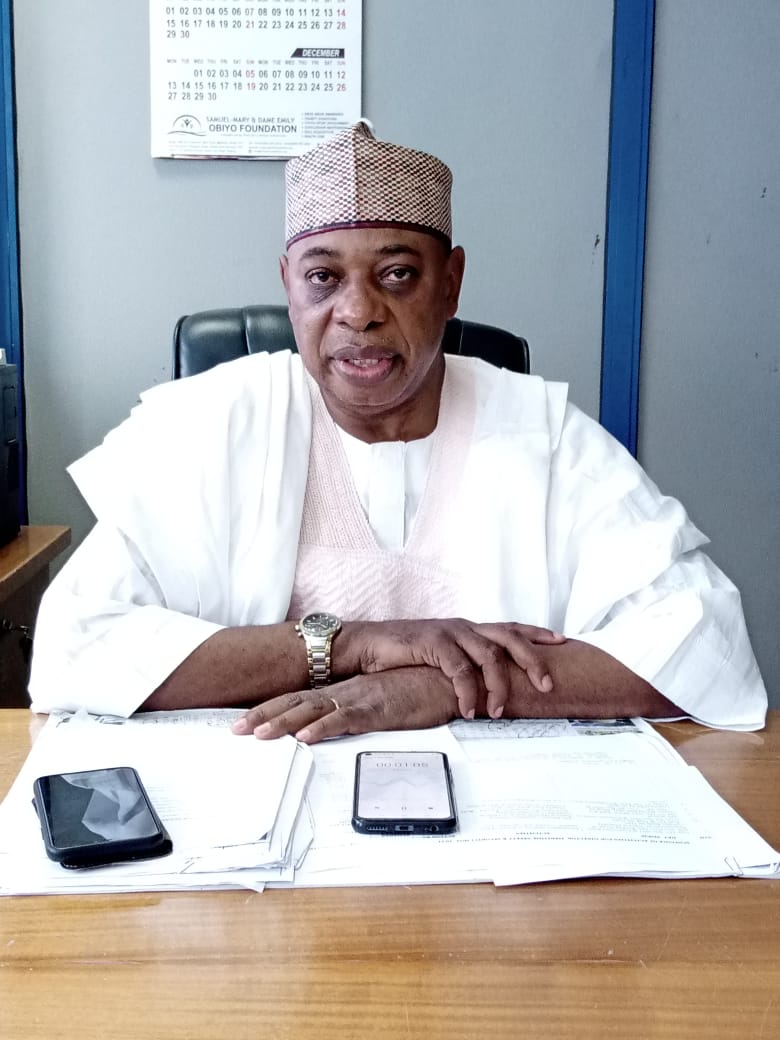 Q: Congratulations on your victory as SG of MOWCA. How did it come to you; how do you feel emerging the victor, the first time a Nigerian is contesting for the office?

Adalikwu :Thank you very much for this question. I must say, on a personal note, I am very delighted to have been given this privilege and honour, and as the first Nigerian to be elected to this exalted office, I’m quite happy. Let me also start by saying that I’m grateful to the President Muhammadu Buhari, for approving my candidacy through the nomination of His Excellency, Rt. Honourable Rotimi Amaechi, the Minister of Transportation, who wrote to the President and sought his approval of my candidacy to vie for this office.

Let me also acknowledge the wonderful work that the Honourable Minister of State, Distinguished Senator Gbemisola Saraki did in ensuing victory for Nigeria in this office. She led a campaign team of experts, including members of the Senate, House of Representatives, Permanent Secretary and Stakeholders in the maritime and private sectors. We went to several African countries like Cameroun, Gambia, Togo, Benin Republic and Niger, among others, to seek their endorsement of Nigeria’s candidacy, and in the end, all of these efforts paid off.

I am grateful to all of these individuals for having collectively worked to ensure our victory, and I’m thankful to Nigeria for finding me worthy to take this position on its behalf. I assure that I will not fail in this task ahead.The victory did not come easy; it did not come on a platter of gold. The closing date for nomination of candidates was about two years ago, and elections were to hold in the first quarter of 2020. It did not happen. It has been a rigorous process to arrive at this destination. A lot of efforts went into this, and there were obstacles on the way, especially internationally, which is to be expected of international politics.

When we went to Congo for the elections about three months ago, everyone read in the media what played out; we had overaged candidates and countries that were owing in arrears of their membership dues to the organization.
Yet, despite the fact that, Nigeria had the only qualified candidate, the process in the DR Congo was inconclusive and ended in a debacle. We came back to Nigeria, re-strategized and pushed ahead, and with Ghana having been elected as the Chairman of the organization, an extraordinary session was called, we went there campaigned vigorously until the last minute to ensure that Nigeria achieved victory. So, the process wasn’t easy, but we kept our eyes on the ball and in the end, we achieved success. I feel happy about it and would like to say It is a victory for all MOWCA member countries.

Q: I would have asked you what Nigeria would benefit from your regime, but it’s obvious you are responsible to 25 countries now. So, what should these 25 member states of MOWCA be expecting in the short, medium and long terms of these four years ahead?

Adalikwu :Expectations under my new leadership as the Secretary-General will be summarized this way; one, we all know that this organization has been ran down to the ground. As a matter of fact, the outgoing SG did not show up at the 16th Extraordinary Session; his Minister of State Transportation had to play the role of handing over to me. The Honourable Minister of State Transport of Angola handed over to me on behalf of Angola where the erstwhile SG hails from. So, the organization has a lot of challenges. In the last ten years or thereabout that the former SG was in office, no substantive initiative was taken to reposition the organization.

So, my first task is to rebuild from the ground up. I need to engage in the short term in order to achieve some low hanging fruits. I need to engage with all key stakeholders, both in the public and private sectors, especially the Council of Ministers in the 25 member nations; they’re all my bosses. I need to consult and engage closely with them, and craft a vision that is in line with the founding fathers’ mandate for the organization.
Thereafter, I intend to engage with the private sector, stakeholders, organizations and see where they want this organization to go. Through collaborative effort and team spirit, we shall achieve. In the short term, a repositioning of MOWCA in line with what it’s supposed to achieve in terms of maritime security, cleaner marine environment, stopping illegal and unregulated fishing in the West and Central African sub-regions and engage with AfCFTA.

AfCFTA is an agreement that Nigeria has signed, and we will encourage a number of MOWCA members to key into in the medium term, and see the benefits of the agreement to MOWCA as an organization and what it can bring to the member states. Let me also not forget what we’ve been pursuing establishing a financial framework that member states can use to draw resources at very low interest rates to develop their maritime sector. Here, I’m referring to the Regional Maritime Development Bank. It has been in the incubator for almost a decade, but under the leadership of our Minister of Transportation in Nigeria, Honourable Rotimi Amaechi, that bank is finally seeing the light of day.

In line with the requirements for the establishment of the bank, we’ve obtained the needed quota of eight member states who have signed onto the charter and are ready to roll.
In the coming days, a number of other states, particularly under the Chairmanship of the Honourable Minister of Transport of Ghana, Kwaku Ofori Asiamah, who has also pledged to work to see the establishment of this bank, we believe that by the first quarter of 2022, Right Honourable Rotimi Amaechi, alongside his colleagues will launch this bank, with headquarters in Abuja, to the benefit of all member states. In a nutshell, these are a number of areas that I think I will tap into immediately so that member states can begin to have confidence in the new leadership of the organization and come back on board, for those who have been sitting on the fence for the last decade or so.

Another area that I think is very critical for the member states of the organization, from my interactions with them at several meetings including the ones in Kinshasa and Accra, is the issue of capacity building. A number of Ministers have approached me that the leadership of agencies in their ministries are not properly equipped to deliver on their mandates . They are lacking in the area of capacity building and development. Take the case of Sierra Leone, for example; they have experienced Ebola, COVID and other catastrophes, including civil war such that their capacity in all areas of endeavour is currently very low. Their Minister has personally requested that we do what we can to assist him in building up the capacity in the Transport and Maritime sectors, which I pledged to do. As we all know, the World Maritime University in Malmö is a world-class university that can provide both training for students and faculty that we will tap into to improve on the existing institutions that we have.

There’s also the Regional Maritime University in Accra, Ghana; the regional Maritime University in Cote D’Ivoire, and of course our own Maritime Academy of Nigeria in Oron, which, though not under MOWCA, we will work to ensure that it is brought into the fold for the maximum benefits that we can attract from the World Maritime University in terms of advanced training to the faculty and students to improve their knowledge and skills in the maritime sector. I will also work to bring about increased credibility in the certification of seafarers and cadets that graduate from these institutions. There are other stakeholders that we can approach, from Singapore, Japan, Canada , USAID, amongst others. There are also a number of donor agencies out there that specialize in providing technical assistance. We shall engage with them. I will work for increase in our capacity building efforts in Nigeria and the member states of MOWCA, to ensure that our cadets are properly trained and placed onboard vessels to acquire the mandatory seatime experience that they need to be gainfully employed in the global maritime industry. These, I shall pursue very vigorously. In a nutshell, these are a number of areas that I think I will work on immediately so that member states can begin to have confidence in the new leadership of the organization and come back on board, for those who have been sitting on the fence in the last decade .

Q: We are approaching the International Maritime Organisation (IMO) elections coming up very soon. Do you have a vision to see a MOWCA member state as council member, because there is none on the council as we speak?

Adalikwu: The issue of membership in the IMO, especially for countries under MOWCA, is being driven largely by Nigeria, who has indicated interest in vying for membership in Category C. Mr. President has approved the country’s contest. So, with the technical committee in place, MOWCA will key into Nigeria’s technical committee in driving its efforts to be a member of IMO Council in Category C. Since there is no membership of any West and Central African country presently, MOWCA will take upon itself the responsibility of keying in and bringing onboard the support of its member states in favour of Nigeria’s bid in the December elections.
We need the voice of a MOWCA member country in that organization., and Nigeria is well positioned to be that voice for West and Central Africa . Thank you.