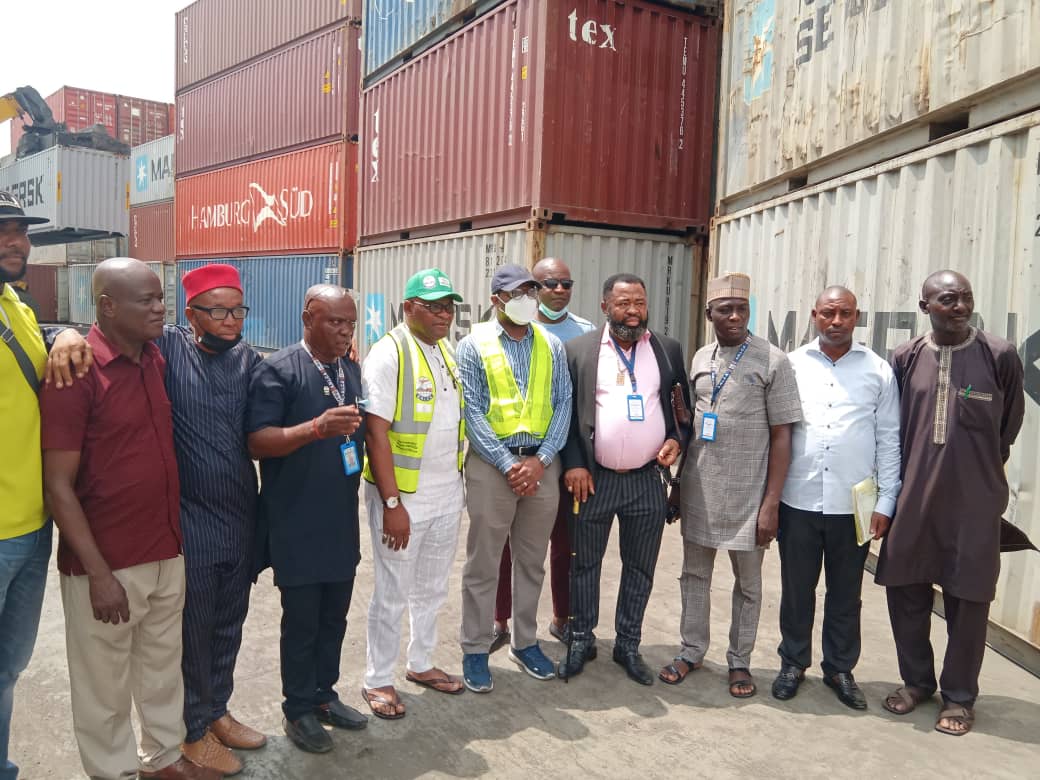 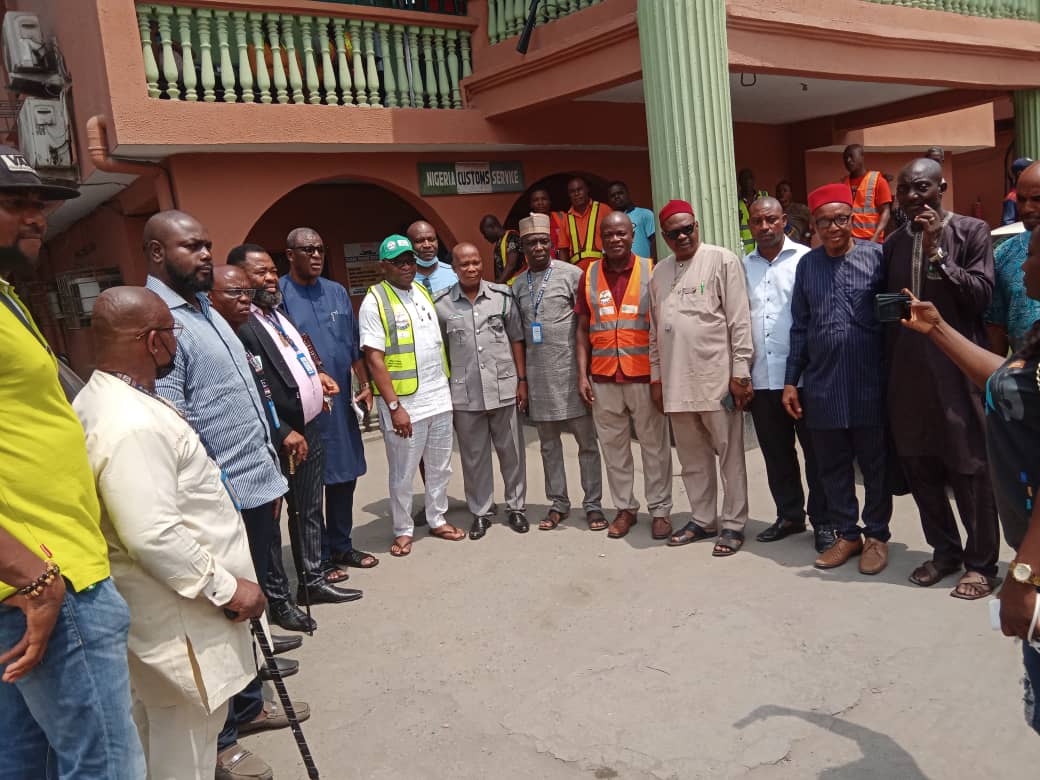 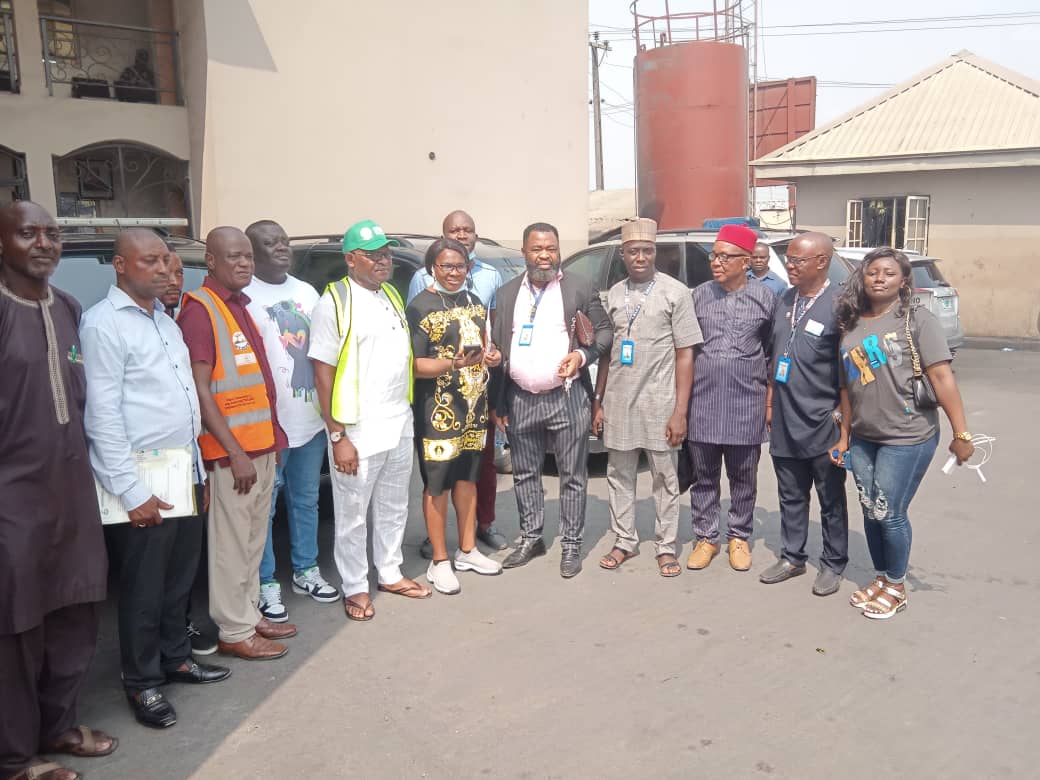 The first point of call was the Unity Bonded Terminal were the team met with the Managing Director of the terminal, Tobe Obijiaku and I.O Ojegbu the Customs Staff Officer, who represented the DC terminal.

Dr. Budu noted that the main objective of visiting the terminal was to acquaint themselves with the terminal, educate and sensitise their members about the activities of the association and also to collaborate with both the terminal Operator and the Customs as regards making jobs easier and tackling issues as they emerge. Also to find ways of solving some of the issues that may crop up on all sides of the business chain and to provide a known and well structured channel for dispute resolutions.

He noted that the compliance team will be on ground at the terminal to educate people about the proper channels of getting their jobs cleared and having them moved to the designated destinations and for faster resolution at the terminals.

Mr. Obidjiaku told them that his terminal though understands their intention to engender a more cordial working relationship with the terminal, but that they are constrained with space and may not be able at the moment to provide an office space for the Compliance and Task force team of the association. He though expressed his desire to work with the chapter executives to make their operations much easier.

Dr Budu while addressing the freight forwarders in the terminal urge them to be compliance to avoid delays of their consignments which often leads to demurrage. On their parts some of the freight forwarders complained that they have problems of raising terminal charges invoice as there are usual delays after mails have been sent to the terminal. They also complained about delays in dropping of containers for examination and also that the other government agencies in the terminal are extorting money from them.

At the Classic Bonded Terminal 1, the team met with the Managing Director of the terminal Mr. Anthony Ngozi Onwuegbune and after tabling their reasons for the visit, the MD noted that as a former Customs officer and now a practitioner along the
logistics value chain he understands the intrigues on both sides. A representative of the Customs’ officer-in-charge at the terminal, R O Akinsanya was also in attendance. Mr Onwuegbune promised to work together with the team and support them when the arises. He said there is no delays in clearance of cargoes in the terminal and that the construction going on around the terminal to channel erosion is being carried out by the Lagos State Government after sending an appeal letter three years ago.

At the Fano Bonded Terminal, the team met with the Terminal Manager , Princess C A Orieh as the team also articulated their reasons for the visit, the Dr Budu . Mrs. Orieh said that the terminal has always had a good relationship with the Association as their their chairman being a patron of the association. The team also met with the Customs personnel at the terminal who promised to work with the representative of the association.

At the Zarmmak Bonded Terminal, the team had a closed door meeting with the Customs personnel at the terminal, but afterwards had a meeting with the representatives of the management of the terminal as they articulated their reasons for the visit. One important thing to note in all the visits during the tour is that at all the terminals, the terminal managers as well as the Customs personnel all indicated their willingness to cooperate with the chapter chairman’s team and also help in engendering good business relationship with the members of the association.

The ANLCA Apapa Chapter has so far paid courtesy visits to seven terminals under their Chapter and wish to continue in days to come.