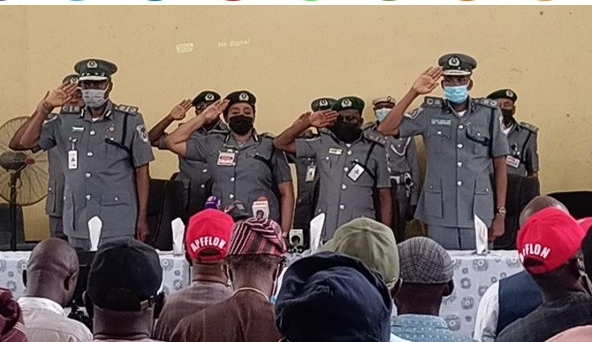 The Nigeria Customs Service (NCS) on Tuesday held a strategic stakeholders meeting to delibrate on the Vehicles Identification Number (VIN) valuation policy recently introduced by Service for all imported vehicles.

The introduction of the VIN valuation has sparked -off huge protest in the Lagos ports which led to the shutdown of all port activities in the last twelve days. Though neither the Customs have resolved the issues nor the striking freight forwarders promised to call- off their strike, there was no clear direction of what will happen in the ports this week.

During the stakeholders meeting which was held in Lagos and chaired by the Zonal Coordinator of NCS , Zone, A Assistant Comptroller General Modupe Aremu alongside ACG Tariff and Trade, Hamza Gummi, ACG ICT and Modernization, Saidu Galadima among Controllers of Apapa Command, Comptroller Malanta Yusuf, Tin Can Island, Comptroller Olakunle Oloyede and PTML, Comptroller Festus Okun promised that the Service Management will look into the issues raised by stakeholders to resolve the VIN valuation policy.

Addressing the media after the meeting, ACG Aremu, explained that the Customs is going to modify the complaints of the freight forwarders to arrive at a conclusive arrangement for the VIN valuation. The Zonal Coordinator of NCS in Zone A, Mrs Modupe Aremu who represented the Comptroller General of Customs at a stakeholders meeting on Tuesday, assured that the customs management will meet on Wednesday to review the stakeholders complaints.

According to her, “We are going to modify their complaints going forward. The modification will take care of the complaints of the clearing agents as regards VIN.We also talked and rubbed minds on a solution to this ongoing strike at the ports.

“The agents were actually trained ahead of the implementation of the VIN valuation. That was why we were not expecting this kind of response from them when we began the implementation. Due to the complaints the agents gave today, we are going back to the drawing board to modify all the issues that they raised. Hopefully, very soon we will get back to them on the outcome of the modification. VIN has come to stay, it cannot be suspended.”

“We are meeting on this matter tomorrow (today) and I’m sure we will come up with a solution that will be a win-win for Customs and freight agents. The agents were actually trained ahead of the implementation of the VIN valuation. That was why we were not expecting this kind of response from them when we began the VIN implementation,” ACG Aremu said

She, however, appealed to freight agents to make efforts to attend future stakeholders engagements ahead of new policy introduction, opining that several meetings were held on the VIN valuation previously but freight agents sent their workers who couldn’t make worthwhile deliberations on the issue

Also speaking , Aliyu Galadima Saidu, Assistant Comptroller General in Charge of ICT and Modernisation disclosed that efforts will be made to bring training closer to customs agents, noting that the centralized trainings organized by Customs headquarters recently has limited the participation and impact of the trainings.Saidu added that trade in an ICT driven era requires sincerity and integrity as according to him, some persons were found to change VIN figures of their imported used vehicles so as to be processed as non standard VIN to evade complete duty payments.

Stakeholders have complained that though they all wants a uniform payment and clearance system for imported vehicles, which VIN valuation is expected to bring , but the outrageous values, non input of Wear and Tear and Depreciation values and consideration on accidented vehicles are what the Customs have not included in the values, which makes the values not realistic with the market realities.